Both the jokes and the gameplay aim low in Family Guy: Back to the Multiverse

Family Guy: Back to the Multiverse's first joke provided me with an accurate forecast of how I'd feel about the rest of the game.

A seemingly normal, middle-class family sits on a couch watching TV. The newscaster begins the broadcast: "Can a woman really be mayor or will she just menstruate all over the city?"

It's less social commentary on the senseless state of male-dominated politics and more of just a crack about lady parts. And it sets the tone for Back to the Multiverse's approach to humor.

Despite the inclusion of the show's excellent cast of voice actors — including some standout lunacy from Adam West — and a faithful art style that perfectly recreates the cartoon's aesthetic, Family Guy: Back to the Multiverse amplifies the television show's excesses. The game succumbs to ever raunchier, recycled premises and endless non-sequiturs — a mindless parody of the cartoon's formula.

Family Guy: Back to the Multiverse takes its cue from a 2009 episode of the TV show called "Road to the Multiverse," in which Stewie, the series' diabolical toddler, and Brian, the Griffin family's talking dog, travel to parallel universes. Each multiverse contains an alternate version of reality. In one universe where Christianity never existed, the Dark Ages never happened — zing!

The enemies may be idiotic, but at least you have a variety of tools to take them down 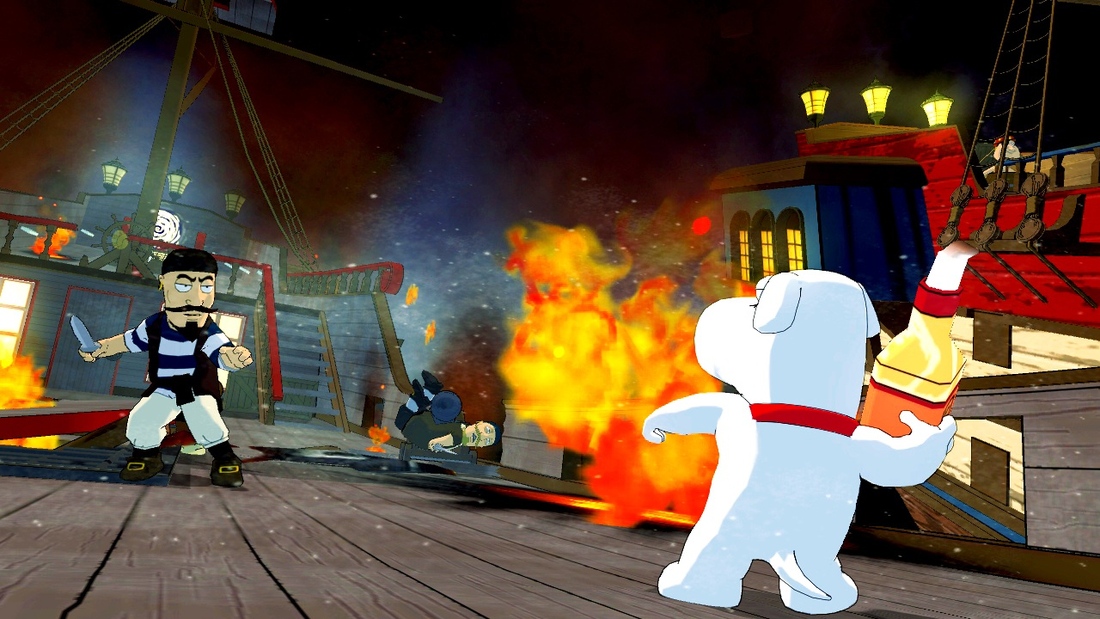 Players switch between control of Stewie and Brian at will, running around colorful levels and shooting hordes of enemies. The two protagonists control identically, but their weapon loadouts offer different advantages. Aside from a few bland puzzles and fetch quests, Back to the Multiverse focuses entirely on shooting.

Killing enemies earns you Clams, which you use to buy new weapons, adding some depth to what's otherwise a rote over-the-shoulder shooter. Long and narrow paths are perfect for Brian's sniper rifle, while being surrounded by hordes of exploding suicide elves is easier to deal with by switching to Stewie's rocket launcher. The enemies may be idiotic, but at least you have a variety of tools to take them down. 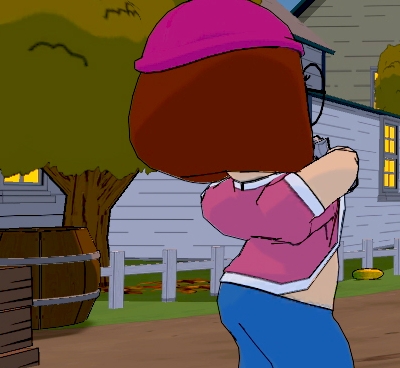 Regardless of what weapon you go with, you'll be facing down wave after wave of the same handful of enemy types. Cloned enemies often stand shoulder to shoulder performing identical animations. Coupled with their tendency to repeat the same asinine "I can't believe he just said that" dialogue, repetition becomes the game's defining feature.

Even the parallel universe concept is wasted on lame, poorly-developed jokes. The first parallel universe sees Greeks ruling the world as frats (shorthand for drunken idiots). The most common prop is the abundance of sex dolls scattered like so many beer cans throughout the bushes. They serve no purpose in the narrative or gameplay, but they're an apt metaphor for the cruft that substitutes for substance in this game.

Family Guy: Back to the Multiverse draws from a shallow well of conventional humor. All frat guys are angry, but they'll tell you over and over that they're definitely not gay, so that has nothing to do with it. The Amish rage because of tourists and sex. Pirates are "penis lovers" because, you know, dick jokes! Its insistence on exploiting taboos without any appreciable purpose reaches its illogical conclusion when you assassinate a politician from the sixth floor of a school book depository, thereby fulfilling exactly nobody's fantasy, ever: becoming Lee Harvey Oswald. It's crass, hollow absurdity.

Both the jokes and the gameplay aim low in Family Guy: Back to the Multiverse

Family Guy: Back to the Multiverse is a functional, ordinary third-person shooter hobbled by simplistic AI and vulgar gags. In an early mission, Brian deadpans, "I'm no longer enjoying this" as a bad guy charges him. Given the circumstances, he probably should have kept his mouth shut. But that's something that neither he nor this game were ever interested in doing.

Family Guy: Back to the Multiverse was reviewed using retail Xbox 360 code provided by Activision. You can find information about Polygon's ethics policy here.