Share All sharing options for: Hands-on with StarCraft 2: Heart of the Swarm's evolved Zerg single-player campaign

The Zerg of Blizzard's StarCraft universe obsess over the genetic perfection of their species. Through mutation, acquisition and evolution, the insectoid collective embraces growth and change in the pursuit of galactic domination.

Blizzard itself exhibits Zerg-like qualities in the design of its games, constantly adjusting, adapting, evolving and sometimes discarding the innards of its titles until — sometimes years later — it's content with the final result.

When I last played the single-player portion of Heart of the Swarm, Blizzard's upcoming expansion to 2010's StarCraft 2: Wings of Liberty, it was nearly 18 months ago. It was a different game. Narratively, it's still familiar: Terran Ghost turned Zerg queen Sarah Kerrigan is back with her brood, seeking revenge against the Terran Dominion, traveling the universe in her Leviathan, conquering worlds.

But things have changed. Blizzard has sloughed off old design decisions. New Zerg units have come and gone. Game mechanics have been reworked.

The core of StarCraft 2: Heart of the Swarm is still intact. Across 20 missions, players will control Sarah Kerrigan as she expands her brood, strengthening it through new genetic discoveries. She'll battle the Terrans, Protoss and opposing Zerg broods as she enacts revenge upon Arcturus Mengsk.

Kerrigan will play the role of Zerg queen and hero unit. She'll be playable in most of the game's missions and she, like the rest of her swarm, will have the ability to upgrade her skills and powers over the course of the campaign.

In the version of Heart of the Swarm we saw 18 months ago, players could unlock Battle Focuses for Kerrigan. These were "kits" with special abilities and powers that players could swap in and out. In the updated version of the expansion, Kerrigan comes with a skill tree that unlocks as she levels up, lending Heart of the Swarm a more RPG-like structure that gives players extra flexibility in customizing how she plays. 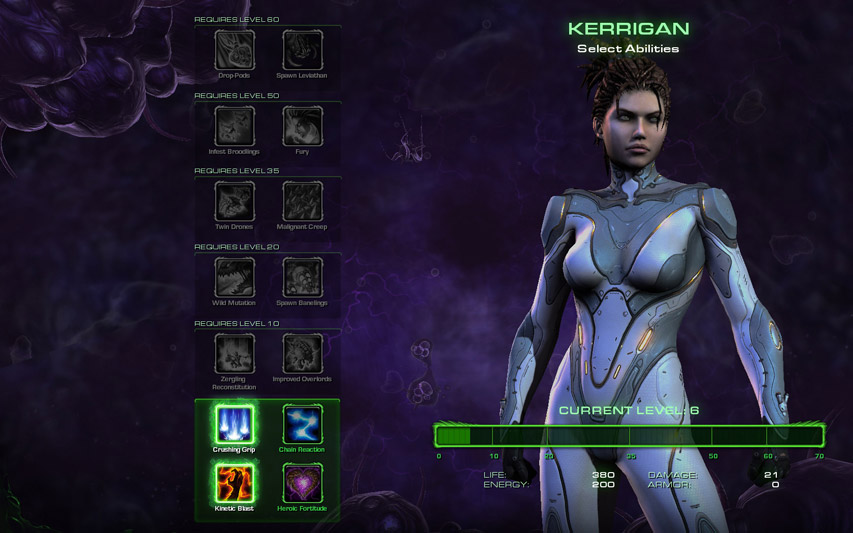 Players can level up Kerrigan by completing missions and optional tasks during the campaign. Previously, Blizzard had players collecting hidden DNA strands in missions to upgrade Kerrigan's abilities, which Browder called "the worst idea ever," likening the scrapped collectible to "Zerg Bucks."

"It didn't feel like you're the leader of an alien swarm," Browder explained of the change. "I don't want a bank account of Zerg Bucks somewhere in the game that will quantify how many Zerg upgrades I can purchase. That felt just awful."

For lore and theme reasons, DNA collecting was nixed. Now Kerrigan grows as she conquers.

"There are a lot of combinations and story themes that went into these changes to make sure this felt like a Zerg campaign and not like a Terran campaign with a bunch of ooze on it."

Kerrigan's unlockable abilities in the game's single-player campaign are a mix of passive and active skills. Her earliest powers include Kinetic Blast, a powerful attack that can take out units and structures at long range, and Heroic Fortitude, which grants her extra life and faster health regeneration. At her highest level, Kerrigan can summon powerful Zerg reinforcements. With Drop Pods, she can instantly call in a small army of Hyrdralisks, Zerglings and Roaches — 50 units in all. Or she can spawn a Leviathan, a mighty flying unit that deals massive, capital ship-caliber damage.

Players can continue to fine tune their Kerrigan over the course of the campaign. Choices made in her skill tree are not permanent and can be changed at any time.

The Zerg under Kerrigan's command will also be upgradeable in ways unique to Heart of the Swarm's single-player campaign. While aboard the Leviathan — the expansion's equivalent to Wings of Liberty's Hyperion — Kerrigan can visit the Evolution Pit. A Zerg researcher named Abathur resides there, playing with and remixing the genetic code of the swarm.

In the Evolution Pit, players can mutate and evolve various units. Mutations are flexible. Players can tailor the attributes of Zerglings, Roaches, Banelings and Hyrdralisks to suit their tastes. They can mutate those units to attack faster, have tougher carapaces, live longer or move while burrowed. 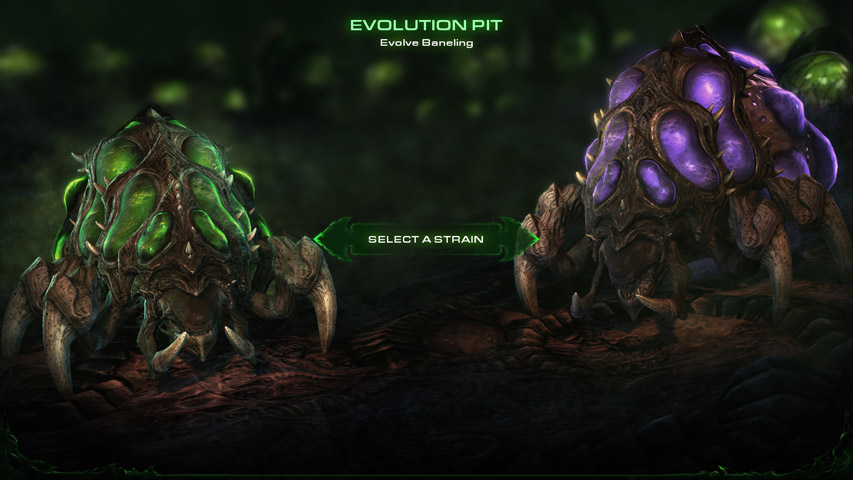 While mutations can be changed at any time, evolutions are permanent choices. Zerglings, for example, can split into two strains: Raptors, a fast melee unit that can jump up and down cliffs, and Swarmlings, which spawn almost instantly from larvae in groups of three, not the standard two. Banelings too can evolve. The suicide units can become Splitters, which divide into two smaller Banelings upon exploding, or Hunters, which can jump up and down cliffs, then leap to attack.

While committing to an evolution may seem like a hard choice, the StarCraft 2 team has designed a series of Evolution Missions to help players decide which evolutionary fork is right for them. Evolution Missions are brief — only a few minutes long — and quickly convey the strengths and weakness of each Zerg strain.

Evolution Missions also provide context for the acquisition of genetic material. In some, players will hunt down indigenous lifeforms, adding their evolutionary benefits to the swarm's adaptive library.

"Kill the monster. Get its stuff. Stronger swarm. That is the central theme of what it means to be Zerg: conquest and evolution."

The three story-driven campaign missions we played at Blizzard headquarters were varied in their structure. In the first mission, Kerrigan and a small brood of Zerg units visited the planet Kaldir. They harvested the genetic material of a yeti-like species and absorbed the feral units of the dead Zerg broodmother Nafash. Kerrigan's invasion of Kaldir drew the attention of the Protoss, kicking off a pair of follow-up missions in which she attempts to prevent her alien enemies from communicating her plans to the Protoss homeworld.

In the mission named "Shoot the Messenger," Kerrigan and her Zerg swarm — now expanded to include Hydralisks — must prevent a series of Protoss shuttles from reaching a trio of warp portals. It's an opportunity to learn the strengths of the Hydralisk in ground-to-air battles with Protoss shuttles, Carriers and Motherships.

The final campaign mission we played was a notable departure — players will control a single larva as it infests a Protoss transport ship, ultimately growing into a Broodmother, further evolving and assuming control of the spacecraft with a small army.

Those missions, we're told, occur about a third of the way through the Heart of the Swarm campaign, leaving us with questions about how Kerrigan got to this point — and where she'll go from here. The game's opening cinematic offers a tease about the beginnings of Kerrigan's story, but there's still much to be learned about the evolution of her character in Heart of the Swarm.

We'll know more soon, as the long-awaited expansion is nearing release almost three years after the original StarCraft 2 arrived. Included will be a host of changes to StarCraft 2 multiplayer, including new units for all three races, and sweeping changes to Battle.net.

StarCraft 2: Heart of the Swarm will be released globally on Windows and Mac PC on March 12, 2013. Here's a preview of what's to come.