Persona 4 Arena attempts to combine two genres that are about as far apart as possible. Can it pull off this impressive feat?

Persona 4 Arena is a strange child born of an unexpected partnership, and for better or worse it carries marks from both of its parents. It gets the story-telling from publisher Atlus, weaving a tale as creative as it is long winded. It takes the fighting muscle from developer Arc System Works (Guilty Gear, BlazBlue), with their fighting games’ bombastic presentation and complex technical combat systems.

From the outside, it’s a family that appears dysfunctional, a project that seems destined to try to please all sides and fail in the process. Against all odds, Persona 4 Arena succeeds. It pulls together the pace and strategy of a fighting game and the character depth and story of an RPG. It struggles with the presentation of these disparate elements but eventually binds them in a way that I thought impossible. Persona 4 Arena presents a middle ground between a niche RPG franchise and a niche fighting game developer that somehow has enough to please both audiences. 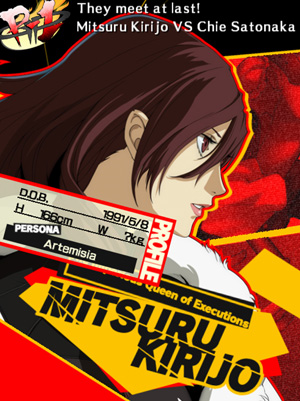 The logic of borrowing characters from an RPG to use in a fighting game is a bit opaque, but at least the Persona universe is suited to this genre change-up. Picking up a couple of months after the events of Persona 4, that game’s cast of plucky high school students plan a reunion for the return of the protagonist, now voiced and given the playful name Yu. A series of sinister mishaps unravel their plans, leading the crew back into an alternate dimension where a mysterious villain has set up a tournament pitting them against one another.

As goofy as the anime-inspired story is, concepts such as shadow versions of each character are already built into the world of Persona, making for relatively forgivable logic governing the motives of each bout. Why would best friends Yukiko and Chie brawl with each other? A shadow pulling Yukiko’s strings and harping on Chie’s weaknesses, of course.

The tournament also provides an excuse for the cast of Persona 4 to cross paths with the older characters from Persona 3. Previously Atlus has dropped tiny hints at the two games being connected, but Persona 4 Arena is the first full-blown cross-over, tying the games together to build a wider Persona universe. World building is one of the last things I expect from a fighting game, but that’s just one of many ways that Persona 4 Arena breaks with tradition.

The narrative portions of Persona 4 Arena are mostly relegated to the console-exclusive story mode. Rather than a single linear plot, story mode allows you to choose from the full roster of unlockable characters. The story has the same beats no matter which character you choose, but small changes along the way provide a fuller understanding of what’s happening.

Though Persona 4 Arena pieces together a complex narrative, the tools it uses to do so aren’t always up to the task. While lengthy dialogue sequences are a given in any Persona game, Persona 4 Arena’s cutscenes stretch on for an eternity by fighting game standards. Assuming you follow the story at a regular speed, you’ll be scrolling through between 15 and 30 minutes of text in-between fights that last 2 or 3 minutes. The ludicrous gap between fights reaches its zenith in Labrys’ story, which wades through nearly two hours of cutscenes before reaching a single battle. 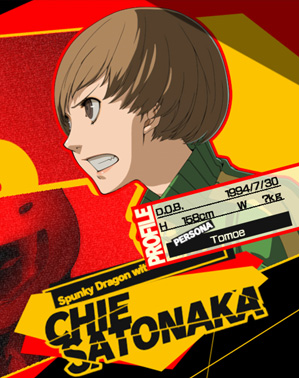 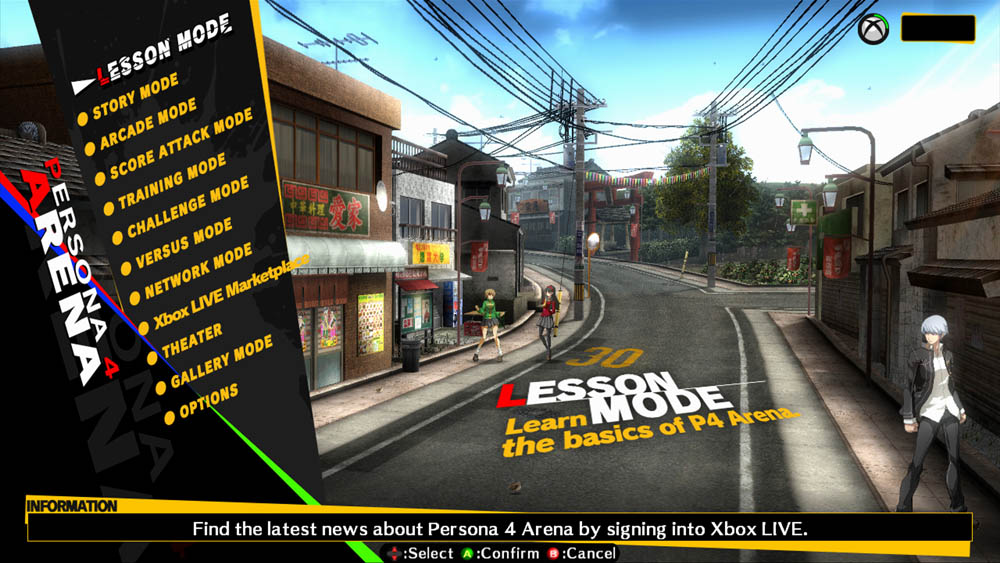 Persona 4 Arena balances between appealing to a more casual audience and appealing to hardcore, technical fighting game fans thanks to modes for every type of player. The variety of skill levels covered by these different options mark Persona 4 Arena as one of the best-rounded fighting game packages on the market. Here’s a helpful guide to deciding which part is best for you.

Story Mode – Getting to 100% here requires around 30 hours worth of patience, but your reward is a great (if unevenly told) story that ties in to Persona 3 and 4 and a basic introduction to most of the playable characters. The generally easy difficulty, low frequency of fights, and focus on plot makes this the best mode for RPG fans who aren’t comfortable with fighting game mechanics.(continued below)

Despite the verbosity, Persona 4 Arena’s story entertains, especially if you’ve played earlier games and have a fondness for these likable characters. However, it wastes too much time portraying characters’ thoughts through endless amounts of non-voiced inner monologue. Dozens of lines of text will be interspersed in the midst of conversations, and more often than not these pages of additional script go over plot points from the previous games or repeat things that were just said. The Persona RPGs were always wordy, but they never relied on such a lazy technique to make their characters understood. On the plus side, a variety of other single-player options are available for those put off by the clumsy method of storytelling [see sidebar].

Even if you’ve mastered the single-player content, you’ll want to spend some time in Persona 4 Arena’s helpful challenge mode before you try taking on other players. Challenge mode allows you to learn and practice specific and increasingly complex combo strings with each character. It illustrates the easy-to-pick-up but jarringly deep combat system at work here. Fighting game amateurs can float by with carefully planned Persona attacks and the ability to chain a series of regular attacks into a powerful special. But once you dig deeper, reversals, status ailments, and rare instant finishers add a bevy of tactical options to each battle.

Persona 4 Arena works for beginners thanks to detailed animation 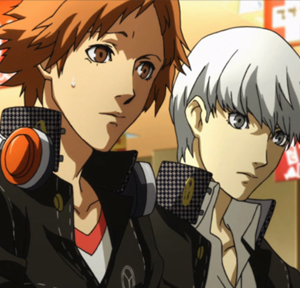 Arcade Mode – You’ll fight more battles at a higher difficulty, you have to actually win two rounds to progress, and story scenes now last a minute or less. This mode is recommended for fighting fans who may not quite be pro-level but don’t have time for lengthy plot development.

Score Attack Mode – Do you go to EVO every year? Do you demolish most of your online competition? Are you one of the two or three people who kept rocking my face as Akihiko every time I fought you? Then score attack mode is for you. Each AI opponent is given absurd buffs to speed, health, and other abilities, requiring advanced skills to put up a fight. I have yet to make it past a single round. 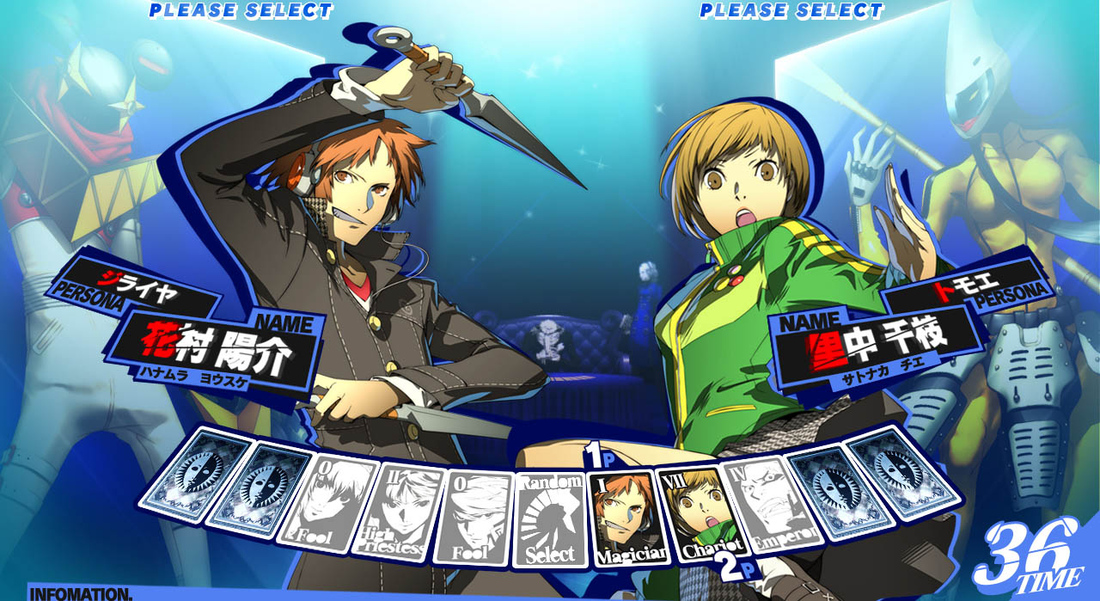 Persona 4 Arena works well even for beginners thanks to its incredible, detailed animation. I have very little experience with serious competitive fighting games, but after a dozen hours of Persona 4 Arena, I started recognizing tics in character movements that give away when a launcher or a powerful Persona swipe was being prepared. Learning these tells turns each fight into a ballet of jumping over opponents, dashing past them, and attempting to lock them into a combo before they can block you. Even as a newcomer regularly destroyed in online matches, I found each fight an exhilarating learning experience rather than a depressing takedown.

Early reports pegged some problems with the Xbox 360 version’s online multiplayer, but a day-one patch seems to have cleared them up entirely. In my hours of online, I have not experienced any lag nor a single disconnect. If I had any complaint for Persona 4 Arena’s online mode, it would be that in the few weeks since release, players already seem to be flocking toward one or two characters, making for a lot repetition in fights. While I took turns trying out Teddie and Yukiko, I only played a handful of matches against any characters other than the powerful Akihiko.

Persona 4 Arena's marriage of genres shouldn't work comfortably, but it does

With such stark differences between RPGs and fighting games, the marriage of the two genres in Persona 4 Arena shouldn’t work as comfortably as it does. Various fighting games have attempted to implement a worthwhile story, but Persona 4 Arena is the first time where that plot is vital. It chokes on its ambitious word count more than once, but never enough to make it anything less than a must-play game for anyone eager to see where Atlus is taking the Persona series next. And while Persona 4 Arena may never take over the pro fighting scene, it has enough interesting ideas, content-packed modes, and pretty art to please most fighting aficionados. I don’t know if this fusion between RPG and fighter will persist, but the bond is already stronger than I ever expected.