When you roll into the PlayStation Store with your new Vita, the number of games to gobble up is going to be overwhelming at first.

But don't panic. Just take them in one at a time, absorbing them until your gelatinous sphere of a body has grown large enough to swallow the large cork keeping you from the drain that leads to the next stage (just watch out for lasers!) and then you —

Begging your pardon, but I lost the plot of my helpful Vita buying advice at some point there and just started talking about Tales From Space: Mutant Blobs Attack.

But I can't help it. Drinkbox Studios' follow up to last year's About A Blob isn't just the most charmingly malleable facet of the PlayStation Vita launch, it may just be the most fun.

The titular Blob of Tales from Space: Mutant Blobs Attack wants little more than to be left in peace so he can side-scroll his way through Earth, eating all that he encounters. It's a simple dream.

Being fundamentally opposed to being eaten, the denizens of Mutant Blobs Attack's peppy, mod-inspired Earth spare no defense, be it helicopter, tank or occasional cow. Like a malicious, suffocating katamari, the blob just absorbs whatever junk he can find until he's ready for any opponent or obstacle (including, specifically, the corks we use to keep him from the sewers that are his main path of transport).

All of Mutant Blobs Attack's tchochkes are rendered with impressive physics, so knocking about the world and eating anything that's not nailed down is a simple joy, even divorced from the platforming challenges you'll complete to progress. That joy is heightened by a tone that never takes itself too seriously, thanks in part to some cute references to beloved memes and indie games throughout. (I especially enjoyed a billboard advertising Souperbrothers Sweet and Swour Swoup.)

When he's not eating livestock, the blob has the ability to stick to magnetic surfaces, squish to eel-like dimensions and — occasionally — fly. What Mutant Blobs Attack does so brilliantly is introduce these mechanics, fully explore all their silly implications, and move on before anything gets stale.

For example, soon after learning of your ability to manipulate some items in the environment with the front touch screen, you'll need to kick the blob with a massive boot to move forward. In many games, this would be a recurring gimmick, but Mutant Blobs Attack has the restraint not to make it a one-off treat.

Where so many of today's releases force players into gameplay cycles that provide diminishing returns of fun with every revolution, Drinkbox is constantly inventing baubles in Mutant Blobs Attack to entertain the player. It's doubly impressive for a title that asks only eight bucks in exchange. 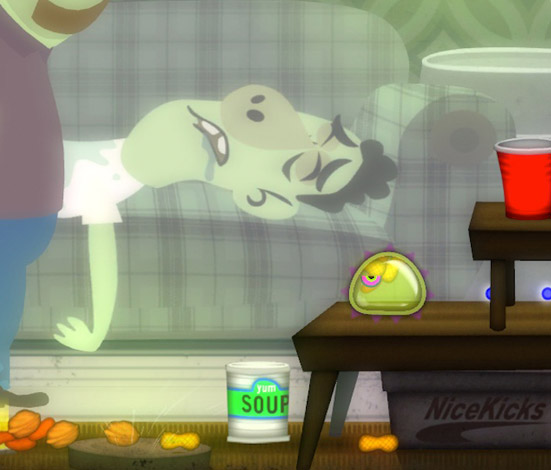 Drinkbox is constantly inventing baubles to entertain the player

A lot of developers are flexing every pixel and polygon they can muster to jam console games onto the Vita, and there's certainly a place for that. But if the Vita is to have a sustainable future, it'll need to find the gaps between home consoles and mobile, games that slip into the divide between the pricing of one and the scale of the other. Tales from Space: Mutant Blobs Attack oozes into that gap perfectly, provided, that is, we keep our corks to ourselves.