Climax Studios have tried to create their own god of war, and players are the casualties.

Bloodforge is a Bad Game.

There are bad games — like this year's Tenorman's Revenge or Operation Raccoon City. People forget them, and the world moves on. But there are the Bad Games — titles likeSuperman 64, Lair, or Too Human, releases that live in everyone's memory forever as a testament to just how badly a game can turn out.

Bad Games brand a studio forever. While goodwill can carry a developer past a bad game, it might take a miracle to get past a Bad one. And that's exactly the situation Climax is in with Bloodforge. The XBLA exclusive is a stunning failure. 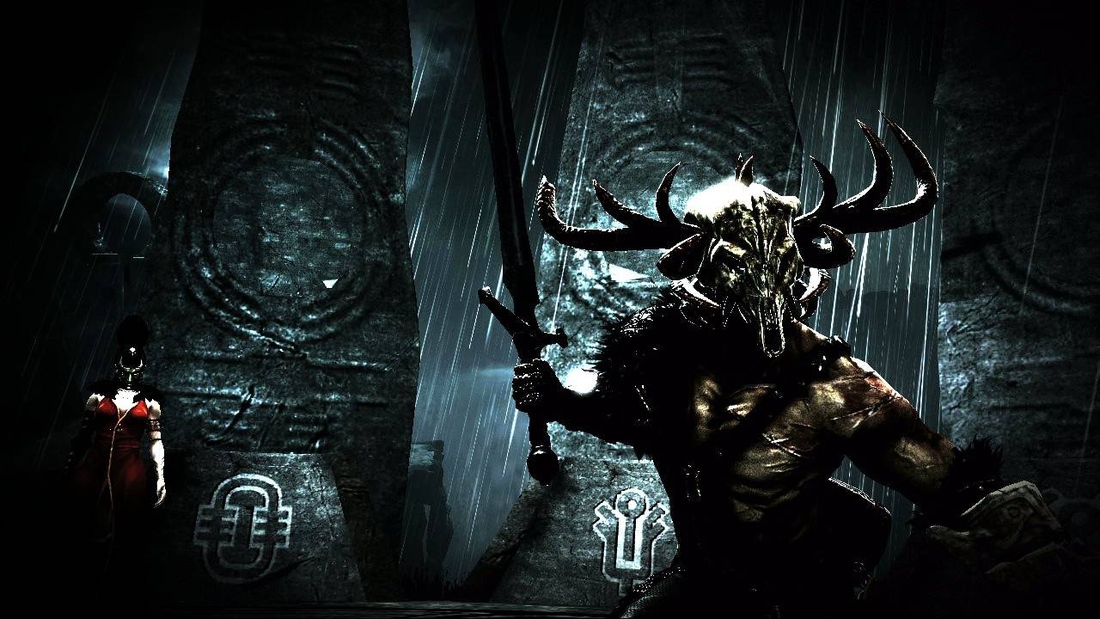 Bloodforge starts confidently, at least. Main character Crom is established as your run-of-the-mill killing machine, but Bloodforge doesn't belabor the point for more than a few seconds before you're in control of your character. In fact, presentation is the only success story Bloodforge could be argued to have — it doesn't get in the way, it keeps things moving for the most part, and quite a bit of narration and story development happens through voiceover as you move Crom from place to place.

"Success" here is relative though. Bloodforge's story is a pile of tropes stolen from other games that stole them earlier, and did more with them. Even main character Crom's name is shamelessly lifted from the Conan mythos (the barbarian, not the comedy writer), and every word out of the deer skull strapped to his face is straight-up Kratos bravado filtered through a heavy in a British crime movie. It doesn't help that Bloodforgeis aping God of War 3-era Kratos, which is to say that Crom is an insufferable dick in a sea of unlikable characters. Even the revenge premise on which Bloodforge is situated is dishonest. 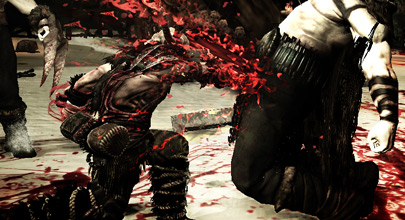 CROM IS a dick

It's hard to dwell on how unrelatable and one-note Bloodforge's motley collection of misshapen god-things are given how ugly everything is. While Bloodforge starts out painted in desaturated almost-black and white, everything past the initial half hour is a muddy mess of one color and black. Characters animate awkwardly and don't look attached to the ground they're running across. While Bloodforge is a gory game, it's broadly visually unpleasant, so much so that it's tiring to try to make sense of.

But Bloodforge will be most remembered for the worst camera in an action game that I can comfortably recall. While the right analog stick moves the camera around, there's some kind of automatic camera system in place that seems to have been designed to take some of the guesswork out of things. Unfortunately, the hole where "guesswork" was buried has been filled with swear words, and the automatic camera will fight your manual control more often than it will help you. 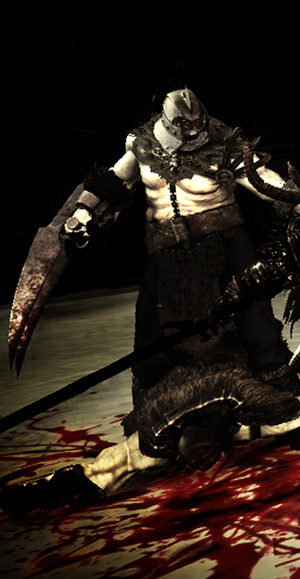 Even running from one poorly designed combat encounter to the next is accompanied by a mind-bogglingly strong camera wobble. It shakes so violently and so unpredictably that Bloodforge should come with a redeemable code for Dramamine. Bloodforge is the first game to nauseate me due to camera movement in 25 years of gaming, and it happened more than once.

If the camera worked perfectly, combat in Bloodforge would still be a fun-sapped chore. But a camera that seems more evil than stupid and controls that work when they decide they want to is a match made in hell. Bloodforge combines input latency-plagued actions — which often take full fractions of a second to respond to your command — with a high animation priority that will leave you vulnerable at almost every moment you're attacking. When enemies hit you, it rarely feels like something that could be avoided — unless you consider not playing Bloodforge a valid tactic.

Granted, enemies are often too stupid to take advantage of those openings most of the time, which might be why Bloodforge's strange auto-targeting mechanic for combat will throw you into empty spaces so often. And if that doesn't add some challenge, then the camera is always happy to break out of the world completely, get stuck behind an enemy, or otherwise show Crom's tartan-draped abs as he gets pounded by an attack you can't see.

You'll get two other weapons in addition to the default blade, but they're of little use outside of an enemy or two, and the crossbow spends 95 percent of the game content to let you forget it exists. Bloodforge has an upgrade system, but it seems present more to say the game has it than to do anything useful. Killing enemies and finding pools of blood will give you points you can use to buy improvements to magic combat modifiers, but Bloodforge is miserly doling out mana to do so, and you can only upgrade at specific shrines.

Of which there are three. Or possibly four. Total. In the whole of Bloodforge. It's a pointless limitation that would be more annoying if it mattered, save to point out how ill-considered almost every decision in Bloodforge is.

THERE'S NOTHING TO RECOMMEND BLOODFORGE

I could go on about the pronounced framerate issues and limited soundtrack, but why? At some point, they're all footnotes below the litany of mistakes composing every area of Bloodforge. It's a game full of shoddy mechanics, poor design decisions, and absymal technical execution. It serves best as a warning of all the things that can go wrong in an action title, all in one place. There's nothing to recommend it.