There are a staggering number of tower defense games available on the App Store. They vary in themes, settings and some minor gameplay elements, but they're all working off the same initial concept. Tons of little soldiers march on screen and it's up to you to stop them, building defensive towers with various strengths and weaknesses depending on what kinds of foes you're up against. One of the very first tower defense games on the App Store, before the mad rush began in earnest, was Fieldrunners. It was well-balanced, visually charming, and offered plenty of replay value. But that was almost four years and hundreds of competitors ago. NowFieldrunners 2 is attempting to retake the throne.

Instead of drastically changing the tower defense gameplay elements in Fieldrunners 2, Subatomic Studios decided to refine them. One of the larger improvements is the addition of a path marker. In the original game, the unending stream of fieldrunners would follow a very specific path. They'd pretty much march straight until they hit something. In Fieldrunners 2, the tiny soldiers, tanks and motorcycles will stream across the battlefield more realistically, constantly changing their route depending on where you place your towers. They'll no longer walk right into the heart of a flamethrower pit, for example, unless you've given them no other choice. Pausing the game will show you just how a placed tower will affect the flow, like throwing a large rock into a shallow river. 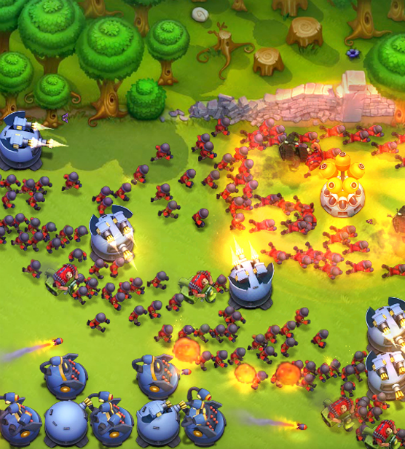 The path markers are a way to encourage more strategy and less guesswork, though they aren't always 100% accurate. If, for example, one path is backed up with runners, tanks from the rear might try to take a longer route to make faster progress. In short, these fieldrunners now have brains. A scary prospect.

A few other gameplay enhancements have been added to make the game a bit less punishing to newcomers. Outside of your defensive towers, you're able to bring two offensive abilities into battle. You can, for example, place down proximity mines to instantly take out a tougher enemy that somehow made it through your gauntlet. You can also choose to rewind time by three turns in case your latest strategy didn't quite pan out.

Power-ups have a limited number of uses per level, though, and can be purchased with coins earned from in-game performance (completing missions, getting kills). Subatomic has, for the time being, totally excised in-app purchasing from its game, a lovely decision given the recent IAP trend hitting iOS. So, for three bucks, you're getting the full monty. 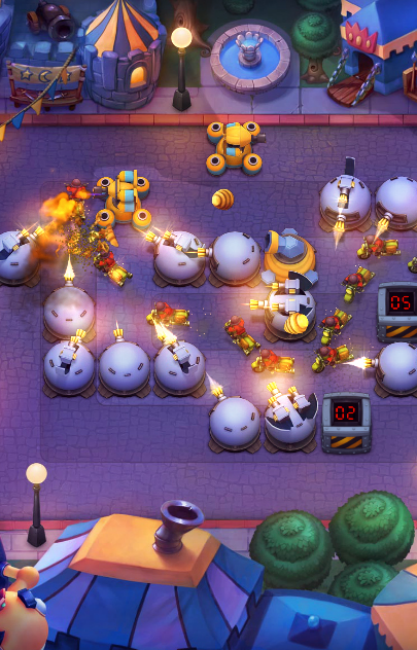 Fieldrunners 2 varies up the gameplay with the addition of a few new modes, though these can be hit or miss. A speedy Sudden Death Mode leaves you with just three lives to contend with a staggering stream of enemies, with the simple goal of killing a certain number of them before you're overrun. Sudden Death maps can take just a couple minutes, whereas the traditional Survival Mode can take a half-hour or more, offering a nice change of pace.

Less successful is Puzzle Mode where you're trying to force fieldrunners into pre-set obstacles using the path marker to indicate where they'll be heading. This mode seems far more based around trial-and-error and feels half-baked in comparison to other modes, especially since the fieldrunner routes can be hard to predict.

But, even in the so-so Puzzle Mode, Fieldrunners 2 still manages to look gorgeous. The game has Retina support for iPhone and iPod Touch, so you can pinch and zoom all the way in to see the incredibly-detailed demise of hundreds of puny soldiers. There's a crispness and charm to the graphical style, bringing to mind a Pixar movie or Team Fortress 2. Despite the carnage on screen, it never appears brutal or insanely gory. It's the equivalent of a child's take on war, where biplanes and motorcycles zoom around electrical towers and bumblebee catapults.

These stellar graphics would have looked great on a larger screen, but sadly the game lacks native iPad support. It's worth noting Fieldrunners 2 looks quite good on an iPad (even on a new, Retina iPad), but it's not the same as when the full screen is being utilized. At 2x mode, the game leaves about 15% of the iPad screen black around the edges. A native iPad version will undoubtedly come sooner or later, but for now it's a shame this wasn't just a universal app.

FIELDRUNNERS 2 IS ONE OF THE STRONGEST TOWER DEFENSE GAMES I'VE EVER PLAYED.

While not as genre-busting as the original, Fieldrunners 2 is still one of the strongest tower defense games I've ever played, neck-and-neck with the equally-excellent Kingdom Rush. It manages to ease newcomers into the genre with thoughtful refinements while offering far more depth for hardcore players, thanks to the addition of new towers, path markers and power-ups. From a value perspective it'll absolutely stretch your three dollars over a dozen hours and many, many boring meetings. It's not to be missed.