McPixel is the crotch-kicking simulator of 2012.

A soft-bellied man in a red shirt and blue jeans has 20 seconds to stop a volcano from erupting and killing the population of a tropical island. He stands at the lip of the fuming crater. To his right are a dog bone, a cow, and a young woman, and to his left a sign reads "Insert virgin." Ignoring the sign, the man grabs the dog bone and pushes it deep inside the cow's rectum. A heart appears over the cow's head and the volcano erupts. Everyone dies.

That scene is a representative slice of McPixel, a collection of point-and-click mini-games now available on iOS. McPixel has two clear inspirations: first MacGyver, the 1980s television series in which a secret agent combines practical scientific knowledge with household supplies to survive life and death scenarios; and secondly, MacGruber, a Saturday Night Live skit in which a secret agent loses track of time and gets everyone killed. McPixel is the step further, a parody of a parody. But it's stranger, grosser, funnier and far more blasphemous. 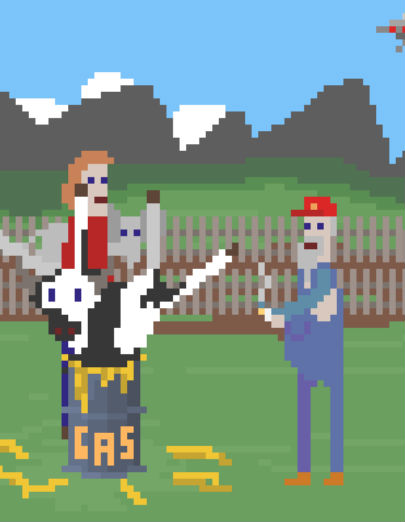 Once again, the soft-bellied man in the red shirt is back at the volcano with the same bone, cow, woman and sign, "Insert virgin." So he grabs the woman, and sacrifices her to the glowing lava. A moment passes and the volcano erupts. Everyone dies.

Point and click adventure games traditionally challenge players to use logic and creative thinking to solve riddles. Not so withMcPixel. The game's inner logic is illogical. What looks like a solution will exacerbate the problem. The logic beneath the right thing to do rarely has any clear rhyme or reason. It's comedy 101: subvert what's expected.

Winning, as in solving a level by preventing the stage from exploding, is more often than not the result of luck. The player always has 20 seconds and a number of people and things, most of which, once pressed, plays a silly or vulgar animation that ultimately doesn't save the day. Some objects in a stage can be picked up and combined with another object or person to produce a different animation. The fun is seeing what happens, what surreal silent film gag the designer has set like a trap waiting to be sprung by your taps. 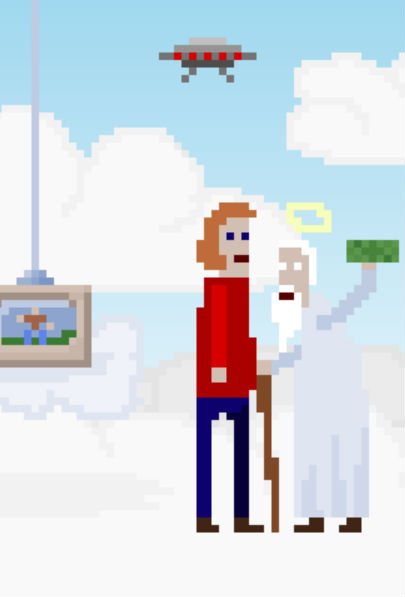 I won't spoil everything, but allow me to reproduce a few lines from my notebook:

McPixel drinks beer, pees on an electrical fire, and saves the day.

McPixel kicks a tombstone and is crushed by God's fist.

McPixel kicks a sumo wrestler in the nuts then tosses a Pokeball to the ground, which entombs a stick of dynamite moments before detonation, and saves the day.

In that rare case the player wins three scenarios in a row, a bonus round is rewarded. Surreal, nonsensical scenarios, bonus rounds are triply meta: a parody of the parody of the parody. In one, McPixel choses from a litter of kittens. He lifts one above his head and squeezes it so tight it poops in his mouth. Then McPixel farts a rainbow.

There's tons of schtick to see. Four chapters, each with three levels. Each level has six scenarios through which the game rotates until all have been completed, or "saved." A scene is gold starred by seeing every gag it has to offer, and gold starring every scene in a chapter unlocks an additional level. An endless mode that repurposes completed scenes ad nauseum is also included, as is a special unlockable ending.

'LONGER PLAY SESSIONS CAN DAMAGE YOUR BRAINS AND GAMEPLAY EXPERIENCE.'

Because McPixel doesn't operate on traditional rules, it can become frustrating quickly, the failures mounting in rapid succession. But that's not the speed McPixel's meant to be played at, nor is the notion of success and failure the right perspective to bring to the game. It's not for everybody, but those it is for should know within the first few seconds. After launching the game, a warning screen appears:

"Warning: It is highly recommended to take breaks while playing this game. Longer play sessions can damage your brains and gameplay experience." The screen is replaced by an animation of McPixel urinating on a bulging tube of dynamite. Then he blows up.

It's the first level and the soft-bellied man is back at the top of the volcano on the verge of eruption. There's the bone, the cow, the woman, the sign saying "Insert virgin." He leaps into the lava. The day is saved.