Klei dug itself a bit of a hole with the first Shank, a hole that Shank 2 is starting from. While the debut delivered one of the most distinctive, striking presentations in a modern game, the play couldn't make the cut. Klei built a strong combo system and some interesting offensive tools, but the level design and boss encounters stumbled again and again, leading to a game that wasn't nearly as fun to play as it was to look at.

When Shank 2 was revealed, promises were made anew of a retooled control system and all the "more" a sequel could ask for. While Shank 2 is a more responsive killer this time and there's more game to go around, it adds as many issues as it solves, and can't seem to fill in all the old gaps.

WHAT THE HELL IS HIS RIGHT HAND SHOOTING AT? 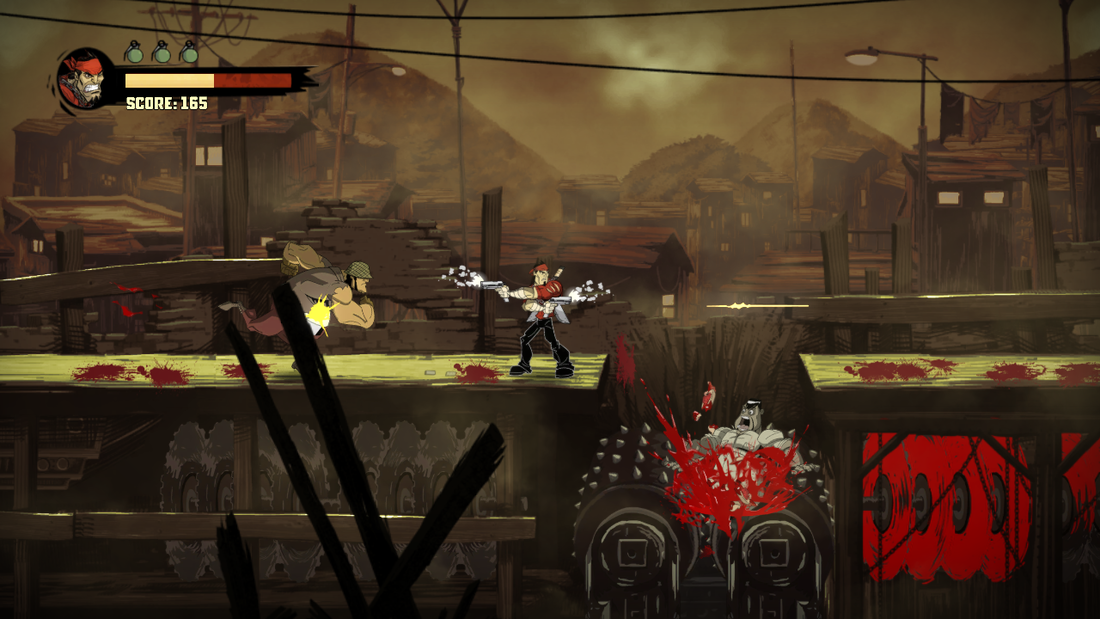 Shank 2 still looks great. The animation and art are fluid and sharp, respectively. There's some great color usage and an overall cohesiveness to Shank 2's presentation that makes every scene look like it was drawn and painted just to exist at that moment. The variety of environments has been bumped up considerably from Shank the first, leading to the sort of world-tour sensibility of classic side-scrolling action titles from the 80s and 90s. While there's not much in the way of enemy variety - or maybe it's just that you kill so many of each type, they all seem ubiquitous - Shank 2 delivers the eye-candy you'd expect, save for when Klei is plucking the sweet stuff away before you can take a bite.

Shank 2's problems start off right away as it drip feeds snippets of gameplay before yanking away control to focus on... some guys, doing some things, right in front of you. Or maybe you'll be treated to the thrilling exploits of some half-naked femme fatales just... you know, standing around. These in-game vignettes are there to establish a mood or a tone, perhaps, because they certainly don't do anything to elaborate on the story. What they're best at is interrupting the oh-so-fragile flow of movement and mayhem that Shank 2 seems to want to maintain, and the constant start and stop halts momentum just as it starts to build.

This is frustrating because Shank 2 has the basics it needs to shine. Shank (the character) is a responsive, versatile brawler, and while his personality is even more one-dimensional than last time, it's easy to ignore in light of how smoothly he delivers murder to the masses. When Shank 2 is at its best, it's the proverbial "best it is at what it does." But the whole thing buckles under a staggering number of stumbles and bizarre choices.

WHEN SHANK 2 IS AT ITS BEST, IT’S THE PROVERBIAL "BEST IT IS AT WHAT IT DOES." BUT THE WHOLE THING BUCKLES UNDER A STAGGERING NUMBER OF STUMBLES AND BIZARRE CHOICES.

The addition of a dodge roll on the right analog stick seems geared toward giving players more active defense options (as dodging can set you up to keep a combo going, rather than drawing back in the face of enemy attacks), but it doesn't quite work as well as it should. In a way, this basic addition speaks to the character-action identity crisis the Shank series feels stuck in. The right-stick roll works in the God of War series due to the distance Kratos keeps between himself and his enemies. But in Shank 2, your attacks are more personal, and moving your finger off your entire offensive repertoire to dodge knocks the flow of combat off kilter (see: Ninja Gaiden: Black and its successors, where your fingers never leave the face buttons and the death contained there-in).

There's a common consideration in AAA action titles of the tools at the player's disposal and the challenges they'll face that's largely lacking in Shank 2. Encounters seem assembled because they seemed cool or cinematic, rather than feeling composed around a particular gameplay loop and trajectory. This leads to difficulty that swings from one end of the spectrum to the other, with fights that are comically easy followed by scenes that will set you on fire and toss you into a meat grinder (literally - one ignominious end among many). There's little balance to the various weapons atShank's disposal, as it's entirely too easy to spam ranged weapons in almost every circumstance - though it's appreciated that bosses are now vulnerable to the full range of Shank's repertoire, rather than the gimmick laden chores of the first game.

THERE’S LITTLE BALANCE TO THE VARIOUS WEAPONS AT SHANK’S DISPOSAL, AS IT’S ENTIRELY TOO EASY TO SPAM RANGED WEAPONS IN ALMOST EVERY CIRCUMSTANCE
WELL THAT HARDLY SEEMS FAIR. 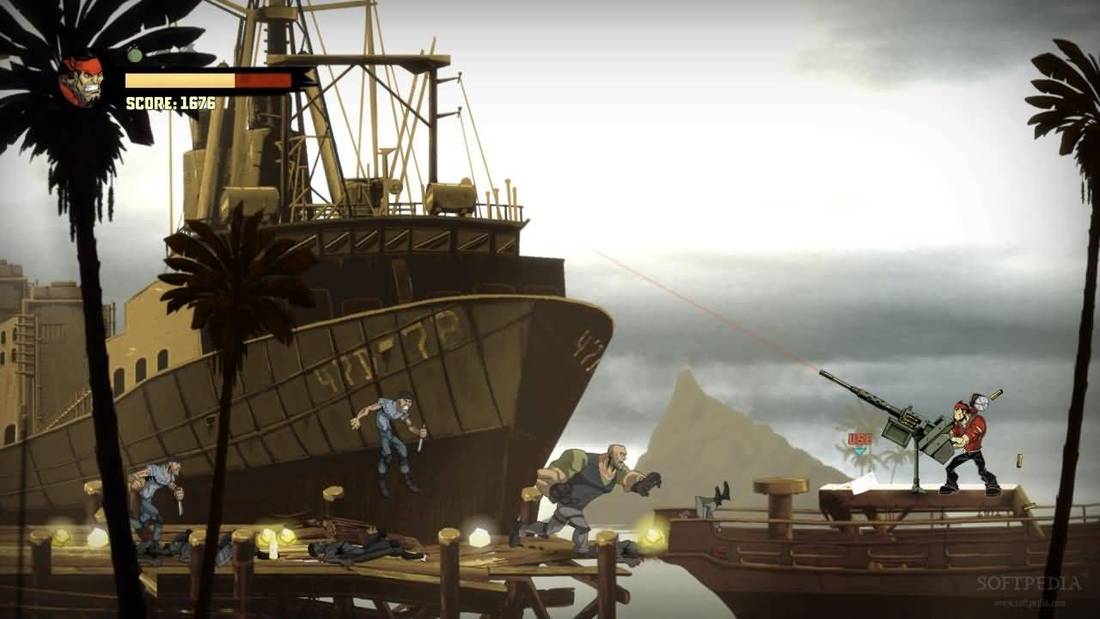 Consideration is also absent elsewhere. The sections that turn to stark black silhouettes against colored backgrounds are very pretty, but the scenery in front of the action was distracting and disorienting, leading to cheap hits and cheap death.

Shank 2 also has difficulty keeping its threats clearly indicated or explained. Too often, there are eight or nine enemies that don't stand out from those busy backgrounds trying to put the hurt on you, and I often found myself in an endless loop of getting up just in time to get my teeth kicked in again. There are myriad encounters where success feels more at the whim of luck (or some AI randomness) than player skill, especially in the second half of the game.

Sure, it's a war of attrition that you'll eventually win, if you beat your head against it enough. But if I'm doing any head-beating, I want it to be from my rightly-earned failures. Shank 2breaks its contract with the player too often over its otherwise reasonable five to six hour duration. Meanwhile, co-op has been removed from the campaign setting and dropped instead into a wave-based survival mode. The idea is sound, and the limited scope of the levels make them less randomly infuriating, but the fundamental flaws in Shank 2's combat design remain, and it's easy to get visually confused when things get hectic. 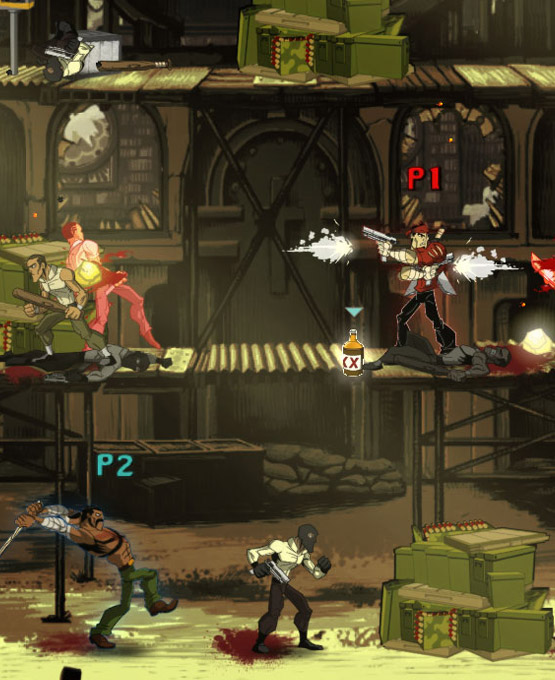 DESPITE SOME IMPROVEMENTS, SHANK 2 IS MORE DISAPPOINTING THAN THE ORIGINAL.

Shank 2 is like uneven road. There are a number of moments where the asphalt is smooth and thereâs a chance to cut loose and have fun with the sophisticated combat options Klei has built. But there are so many potholes, cracks, and unlabeled sharp turns that it's difficult to find a good cruising speed. While there are technical improvements to be had in Shank 2 over its predecessor, missteps old and new make this ride even more disappointing.