Novelty in video games has a pretty short half-life — one that's reduced by sequels with unchanging, mechanical formulas.

Vita launch title Touch My Katamari is the seventh Katamari Damacy installment. Katamari Damacy carried a near-unbearable amount of charm back in 2004, all whimsy and surrealism, piled on top of a clever, puzzle-action design that no other game had ever explored.

Touch My Katamari shows its franchise's age at every turn. Some learned refinements shine through. The responsiveness and intuition of its controls — an occasional Katamari sticking point — are unsurpassed, and do a great deal to sell the multitude of inputs on the PS Vita. Just a few minutes in, however, it's hard to shake the feeling that you've already sunk eight years into this very same game. 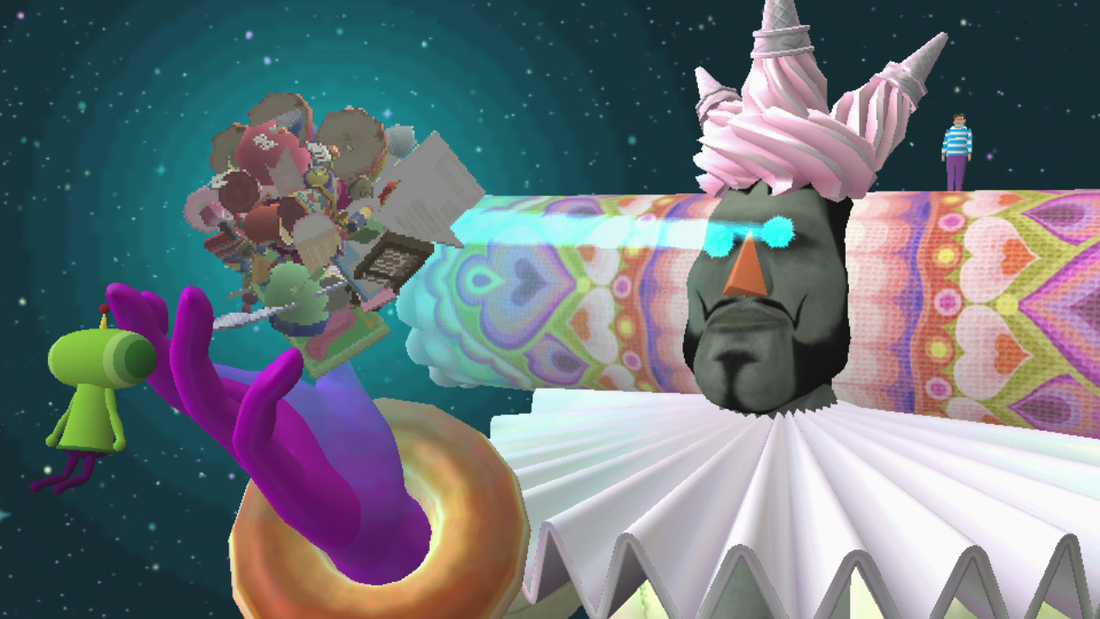 That game has its merits, of course. Few series have conjured up a sense of short-term progression that's as tangible or rewarding asKatamari. In Touch My Katamari, growth is entirely literal — there's no abstract RPG-style progression hinted at. Watching that dollhouse go from impassable obstacle to consumable debris is satisfying in a very deep and primordial manner.

But that speaks to an unfortunate reality of Touch My Katamari. Like the aforementioned calorie-count, many of the dozen-odd levels present in Touch My Katamari are rehashes of levels from older games. One level tasks you with rolling up the biggest bear or cow you can wrangle, a mission that's appeared in two prior entries in the series. Another tasks you with cleaning up a child's messy room as quickly as possible — a job that has also appeared in two other Katamaris.

Players can now stretch and squash their Katamari using the rear touch pad. When elongated, the Katamari becomes a slow, unwieldy but wide-reaching log of death and misery. When smooshed in on itself, the ball moves much faster, but requires more precision to steer into objects.

Manipulating the width of the Katamari is far more intuitive than it sounds, largely thanks to the variety of control options afforded to the player. You can switch between the old school, two-stick method used in earlier Katamaris and a more natural left-stick-moves, right-stick-looks method at any time. Players can also use the front touch screen to supplement those controls, if you so choose. Your hands may be a little more active than you're use to, but after a few rounds, it all clicks. 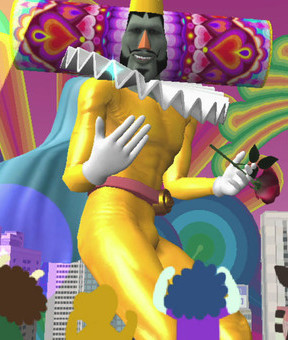 There are some clever meta-game mechanics, including multiple ways to earn "Candy," a currency awarded for admirable performance which can be spent on silly costumes for the already-silly King of All Cosmos, new songs, modes and other errata. There are also a number of social features that make good use of the Vita's connectivity. Players are registered through Near as "Buddies," and present their own challenges which carry their own Candy rewards.

Unfortunately, Touch My Katamari betrays its core objective — the quick recognition of the size and scale of environmental objects — in a couple of ways. When squished and stretched, it's difficult to know just how big your Katamari is. This isn't all bad — it adds another strategic imperative to the Touch My Katamari, requiring you to memorize your size before manipulating it; but it does somewhat reduce the smoothness of your rolls.

The bigger affront is how certain objects seem to cheat the laws of scale established by all the other games in the series. Simply put, some objects in Touch My Katamari think they're bigger than they are — I can't count the number of times I wasn't able to pick up a bush or a bed of flowers when I was already picking up small houses and large automobiles.

Another issue: The best strategy for rolling a huge Katamari is to roll up piles of individual objects that you're just big enough to pick up. Touch My Katamari frequently combines these individual objects — instead of a parking lot full of individual trucks, you get the singular "Trucks," which carries a much larger size requirement. It's inscrutable, and in the more difficult levels, which require a near-perfect run through steadily expanding objects, the time wasted going after them will absolutely kill you.

TOUCH MY KATAMARI WILL FEEL OLD HAT, AND FAST

Touch My Katamari is peppered with small, satisfying innovations, but it never strays far from its old rolling grounds. If you have any measure of experience with the series, then despite its gallons of charm, Touch My Katamari's all-too-familiar set of challenges will feel old hat, and fast.

Touch My Katamari was reviewed using code provided by Namco Bandai. You can read more about Polygon's ethics policy here.