Just in time for the Republican National Convention comes Vote!!!, a game in which President Barack Obama and GOP presidential nominee Mitt Romney engage in fisticuffs to claim leadership of our nation. Yes, following a particularly nasty campaign summer, the figurative bi-partisan scrimmage has finally been literalized in the form of a free iOS app.

Perhaps the only thing it has in common with the actual election, Vote!!! is about choice. Choose between the two politicians, both characterized with lanky bodies and cartoonish bobble-heads. Choose a weapon. They range from the wacky (a red, white, and blue bomb pop) to the practical (a campaign sign) to heavy handed (the Constitution). Choose a costume from what must be the closet of a 80s pop star. And most importantly, choose who you want to win the virtual election inside of Vote!!!

Players earn points for your candidate by winning fights. At the time of writing, Obama has a clear advantage amongst players, with 1,044,900 vs 102,358. 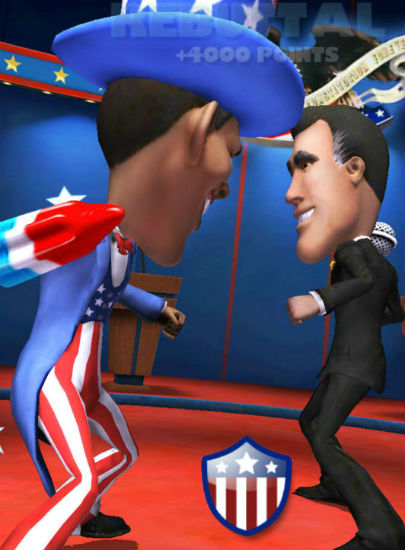 It's all silly and in good fun, avoiding partisan jabs. Obama doesn't have a "Death Panels" power, nor does Romney have the option to sport a swimsuit soaked in the water of the Cayman Islands. The closest the game comes a statement on the current political climate is with its power-ups: the "Super PAC" doubles your points, "Filibuster" adds an extra 30 seconds to a round, "Health Care" prevents the player from being knocked down. Heath Care happens to be the cheapest power-up-it's $200 cost is nothing compared to the Super PAC's $3,000.

Election-related games are expected every four years, usually in the form of hurriedly programmed cash-ins from small studios. What's unusual about Vote!!! is that it comes from respected developer ChAIR, responsible for the tremendously successful Infinity Blade series on iOS.

Vote!!! is a simplified parody of the developer's successful Infinity Blade series, fighting games for iOS set in a fantasy universe replete with shining armor and massive swords. Those games require players to master combinations of directional finger swipes, along with dodge and block maneuvers. Vote!!! boils the fighting down to holding block when being attacked, and swiping maniacally when an opponent's stunned. Combos, dodges, and parry maneuvers are available, but not necessary. A compromise, no doubt, for hardcore gamers and the players who are coming to beat up a politician, not master a complex video game.

ChAIR has even found a way to make the game sticky, casting the illusion of player improvement with a multiplier system, boosted by completing objectives. Some objectives are skill based, like "do 50 parries," but many are rewarded simply for being persistent, like landing 250 hits.

Each objective completed increases the multiplier number by one, so completing 14 objectives gives the player a x14 point multiplier, which basically means: Woo high scores!

Vote!!! is a smartly designed game, even if its release is shrewd. There's no doubt the game will get press and word of mouth into the lead up to the election, with people from both sides virtually experiencing the primal fantasy to beat the opponent senseless. And the game is free, so it can spread like a virus.

Unlocking wacky weapons, costumes, swag, and power-ups, the latter of which help to set high scores, can be time consuming. Players have the option to buy in-game currency with real cash, so those who want to dress up our President like Macho Man Randy Savage have the option to drop cash up front. It's a free game, of course in-app purchases are available, but they're mostly cosmetic. And though power-ups can increase points, this isn't the game leaderboard junkies should turn to. 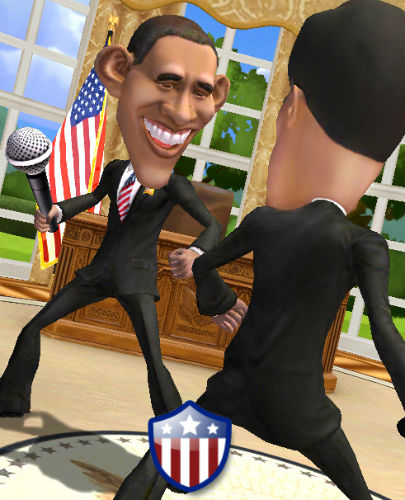 THE GAME, WHILE A FUN DISTRACTION, IS...JUST A MEANS FOR LIVING OUT A SILLY FANTASY.

It would have been nice to see more characters, or an incorporation of the candidates' actual political beliefs and plans. Even if they're just punch lines. Instead Vote!!! plays it safe. Satire takes risks, it makes statements. This isn't satire, it's a violent cartoon. And so, the game, while a fun distraction, is at it's core just a means for living out a silly fantasy.

Despite that, on the game's menu is perhaps the most important feature of all: a large yellow button that sends players to a web page where they can register to vote. Priorities are in order.