The environment getting you down? Get revenge in Jack Lumber!

Jack Lumber is the most charming game about deforestation. Full stop.

The line-drawing, wood-chopping simulation is akin to a slow-motion Fruit Ninja. Logs launch onto the screen from every angle. Touching the screen slows the logs, but starts a countdown timer. The player must quickly draw a finger from the top to the bottom of each log without lifting said finger before time expires. The more logs split, the higher the score.

Stringing together consecutive cuts, drawing straight lines between logs, and busting special items like barrels of TNT and bottles of maple syrup rewards bonus points. Angular logs, frozen logs, and logs that must be chopped multiple times add layers of difficulty as the game progresses. Occasionally sticky touch controls are trouble too, though hardly enough to deter the budding oak chopper. 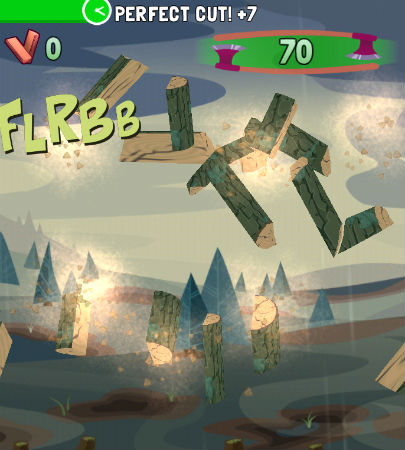 Jack Lumber is as simple as its one-track-minded hero, a beefcake clearing the forest because "a tree killed his granny and he's out for revenge." But it's also funny and addictive, and has tremendous respect for the player. Take, for example, the game's store. A number of power-ups, called syrups, can be purchased with the in-game currency, called logs (natch). Power-ups are relatively cheap: a couple hundred logs, which can be earned in a round or two of tree felling. Those who must have all power-ups active at all times may purchase logs with real cash. 99 cents nets an absurd 10,000 logs. $15 gets you a million. That'll buy a lot of syrup.

The in-app purchase system allows less skilled players to, in a way, buy a high score. It's an arrangement that has become the new normal on iOS. What's not normal, but is quite nifty, areJack Lumber's difficulty modifiers, or "beards." By selecting a beard, also purchasable in the game's store, the game's rules are made harder, but the score multiplier is increased. (Halo fans can think of beards as point-rewarding Skulls.) If you can deal with faster logs or half the countdown time, you can net a much higher point total. And the higher the points, the more logs to spend, meaning the best players can get tons of power-ups without dropping another real-world dollar. 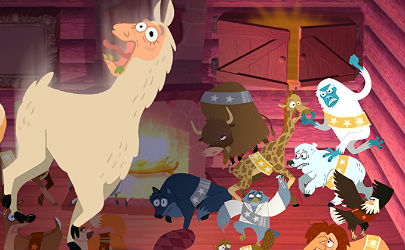 That in-app purchase talk has become the bulk of so many iOS reviews is a depressing comment on the current slate of popular games, but how nice is it to see a studio doing it right? Having their pancake and eating it too.

On top of the fun gameplay, a cheap store, and novel power-ups, there is the garnish of wacky art and punchy story, both of which ape Ren & Stimpy, blatantly. At one point, Buck, the talking beaver sidekick, quotes The Log Song. And the inspiration for the trailer is clear. Call it a loving ode to Jon K.

JACK LUMBER IS QUIRKY, STYLIZED, AND UNLIKE ANYTHING ON IOS.

Jack Lumber is quirky, stylized, and unlike anything on iOS. And yet it's very welcoming, very warm â not what you'd expect from a game starring a one-man eco-pocalypse. As Jack Lumber's destruction of the forest progresses, his house fills with animals, one for each razed plot of land. Tap them, and they scream, squawk, and honk. They're playful reminders of what you accomplished, touchable trophies that didn't have to be included. They exist just for the fun of it. Just like Jack Lumber.