This tower defense / first-person shooter hybrid strips the genres to their bare essentials.

Tower defense is the corn syrup of iOS genres. It's cheap; it's in almost everything; and in general, the result isn't good for you. There are exceptions, notably the recently released Fieldrunners 2. Or potentially Commando Jack, a new first-person shooter and tower defense hybrid.

The genre mash-up made an immediate positive impression, even if it was reminiscent of the Toy Soldiers series. First-person shooting and tower-defense complement one another, particularly on iOS.

First, the tower defense aspect. As in any other game of the genre, the player sets various types of units on a map, blocking and exterminating waves of enemies. The strategy comes from the placement of the units and the balancing of in-game currency on cheap or expensive units. This is all standard in Commando Jack.

The twist is how first-person shooting improves this system. Where most tower-defense games involve setting up weapons and watching the results, the first-person turret gives the player a more active and participatory role. 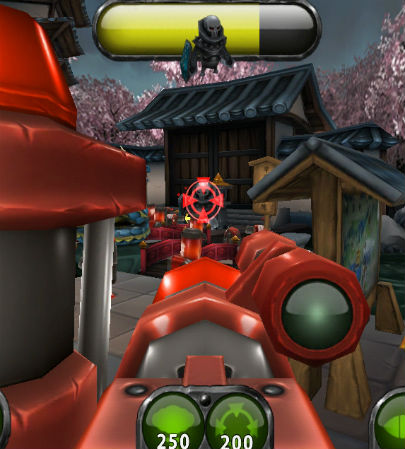 The ability to place units also serves as a workaround for one of the biggest issues with first-person shooting games on touchscreen devices: movement. Moving in first-person shooters is a hassle with touch controls, which lack precision. InCommando Jack, the player doesn't move so much as she shifts. Jack's turret is immobile, but the player can shift into optional grenade turrets that can be placed anywhere on the map. It's semi-mobility, a nice compromise.

Ideally, a skilled first-person shooter player would have an advantage in Commando Jack, but the operable turret is a last-ditch weapon. If your maze of computer-controlled tower-defense machines don't impede the enemies, you're already doomed. The only practical use of first-person shooting is when the aforementioned boss arrives, at which point he is easily dispatched by a single grenade launching unit, one you'll quickly learn to deploy during the penultimate enemy wave.

As for the titular hero, picture General Patton meets John Rambo. He's been ordered to extinguish a global alien threat. The retro B-movie premise and Saturday morning cartoon art design are charming. As are the aliens, the metropolitan levels, and weapons. 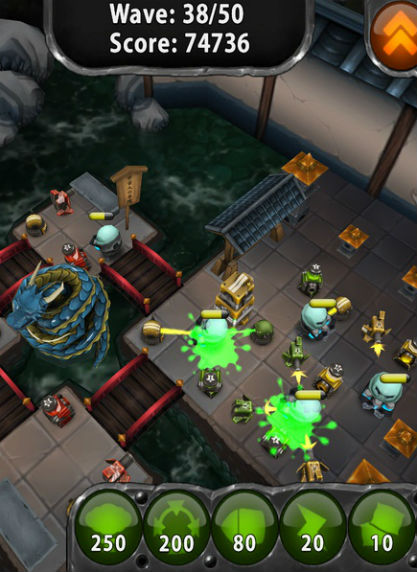 Commando Jack lacks variety, however, and so what starts out cute becomes dull quickly. While the first stage is entertaining, it's evident by the fourth stage victory is more about grind than skill. The game's strategic patterns would be fodder for a first-grader. Machine guns damage ground enemies, lasers damage vehicles, glob-launchers slow down everything, and a single-grenade turret is necessary for taking out the round-ending boss. Direct the aliens through a stream of alternating weapons and victory is yours. Of course, you will lose the first few times, but the money earned will allow for the necessary weapon upgrade. Or you can just buy the upgrade via in-game purchase.

It's a game of patience, rather than strategy. Levels are always slightly too difficult for the weapons immediately available to you, as if to make purchasing an upgrade tempting. That's doubly so, since the upgrades sound so cool: Rocket launchers, flame throwers, nukes, and perks that would require an absurd grind - or a couple bucks.

But this defeats the point of a strategy game: the actual strategy. The player may get addicted to pursuing the upgraded weapons and defeating the enemy threat, but the reality is, underneath it all, not much is being accomplished. Little skill is required. Especially if you drop a couple dollars on in-game upgrades, skipping the grind all together.

Commando Jack isn't balanced. Not as a tower-defense game or a first-person shooter, and most certainly not as combination of the two. It's a cheap, pretty, time-sucking gimmick for the curious fan of the genres. A shallow snack chock full of corn syrup.