Pitfall! is a fun, bombastic and greedy reimagining of the 1980s original.

Activision has remade the 1980s Atari adventure game Pitfall! into one of iOS's more cynically designed apps. A clone of the successful and independently developed Temple Run, Pitfall! looks and sounds better, thanks to a colorful Amazonian setting and wannabe John Williams soundtrack. It's touch controls are responsive, and you can ride a jaguar. The animal, not the car.

Without question, Pitfall! would be the better of the two games, were it not so eager to fleece its players of a couple extra bucks.

In case you haven't played Temple Run, which briefly approached an Angry Birds level of fandom, the premise is such: you guide an adventurer down a treacherous path, leaping over, sliding under, or running around dangerous obstacles. Stop, you die.

Pitfall! adds a whip mechanic, in which tapping the screen knocks an enemy off the path, but otherwise, this is practically the same game, but bigger, brighter, louder. 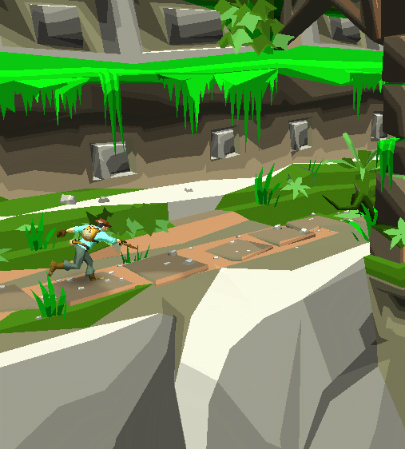 You run, but you also ride minecarts and drive motorcycles-though the core movement barely changes. The overall adventure is far more exciting and bombastic than Temple Run, with the incessant brassy action film score making every run feel like the climax of a Spielberg film.

The goal is to reach checkpoints that break up the path. Each section of the run is unique, like the aforementioned mines and motorcycle sections, a volcanic cave, a swamp (with the iconic Pitfall! alligator), a ruined-pocked rain forest. Seeing what's next is a strong motivator for continuing from one leg to the next.

You will almost certainly get to see more of what Pitfall! has to offer if you're willing drop a few dollars after the 99 cent purchase price. Starting from a checkpoint requires a token, of which the player is given a very limited number. The conceit is for the player to buy them, either directly with real world cash or virtually, by sluggishly earning in-game currency-a excruciating task made slightly faster by paying $1.99 to double the amount of money earned each round. 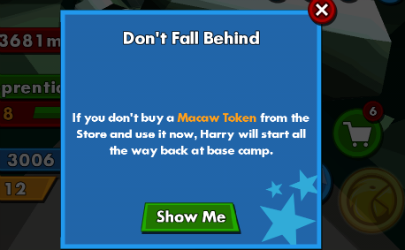 Pitfall! isn't a game that gets harder as you play; it just gets more expensive. Without paying the IAP, you will be replaying the same early parts of the run over and over. The repetition making the game's flaws more obvious. Seeing the same setting so many times, you notice the rough polygonal edges, the glitchy character animations, that the touch controls can be a little unreliable. A cheap death is doubly annoying when it has come after a 10-minute round that could have been one-minute if you just had the ability to start at a checkpoint without a token.

LIKE THE GOLD STATUE IN INDIANA JONES. AN ENTICING TRAP.

Activision had an opportunity to rekindle gamers affection for the Pitfall! brand, and they may still just win the hearts of casual gamers. But they'll do so in the ugliest way possible, by ripping of an independent competitor and begging for cash. The gameplay is like the gold statue in Indiana Jones. An enticing trap.