Angry Birds gets its Joanie Loves Chachi with a spin-off starring the malevolent swine.

Having seen the famous Angry Birds fly through the four seasons, a movie tie-in, and space, we finally get to hear the enemy's side of the story. Bad Piggies, a spin-off in which players create and pilot flimsy vehicles, is an unexpected turn for publisher Rovio. A slower game, it requires more player engagement and creative thinking.

The premise is still simple. Bad Piggies is about collecting pieces of a map that leads to the bird's eggs. This task is complicated because the pigs lack appendages, and thus, to navigate the world, rely on LEGO-like vehicles, built and piloted by you.

At the beginning of each stage, the player is given a limited number of objects, like boxes, wheels, fans, balloons, and fizzy soda bottles, to build a craft. Once constructed, with pig not-so-safely placed inside, the player attempts to reach the piece of map at the end of the stage, earning bonus stars for completing side-goals like finishing the stage under a certain time, keeping the craft in one piece, or smashing special boxes. Vehicles are controlled by tapping buttons that make use of the various parts, for example popping a balloon to decrease the ship's height or opening a carbonated bottle for propulsion. 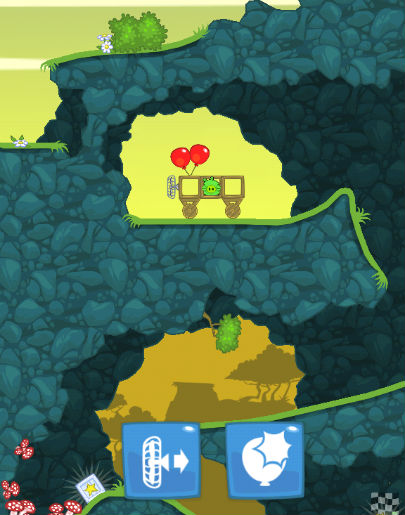 The logic operating beneath the Bad Piggies' design is much like that of Angry Birds. Success comes predominantly from trial and error, in this case seeing if constructing vehicles in a certain way will get the pig to the finish line. Failure is humorous, often resulting in the concussive collision of a cute animal with a hard surface. Both games are broken into tiny morsels of play, so that they can be picked up and put down at any moment, without losing much in the way of progress.

The difference comes from the Bad Piggies' freedom problem. On one hand, the game is too open, allowing the pig and his craft to get stuck in some distant cranny, requiring the player to manually restart the stage. On the other hand, the game isn't open enough, with many stages solvable only by creating a specific ship. Worse, its construction set, at first, doesn't promote creativity. A ship is either built correctly and it does its job, or it isn't built correctly and it flops about like a fish out of water or floats off to Oz.

In the beginning half of the game, choice was often an illusion. The game wanted me to build a certain craft and waited patiently while I tried unusual alternative ideas (that would undoubtedly end in failure). Bad Piggies doesn't feel like a game of skill or experimentation. At least not until later stages, when the game finally provides the player enough parts to create any number of craft, tossing in propellers, engines, wheels, and plenty of boxes with which to build a ships' frame.

The dull first half feels as though it's designed to hold the player's hand, while teaching the game's rules and logic, but the stages never feel like natural tutorials. Learning how the game operates requires digging into a pictorial help guide that can be frustratingly simplistic.

By completing the game's normal stages and earning extra stars, the player unlocks the Sandbox mode and its many construction items. This is where Bad Piggies makes good on its potential, letting the player design whatever strange, elaborate contraption she''d like.

Sandbox mode is made up of only five levels, but they are considerably larger stretches of land and air, containing 20 stars each. Vehicles can be massive here and, in order to complete the stage, must be able to do serve many different roles, from rocketing up steep hills to gracefully falling off cliff edges. 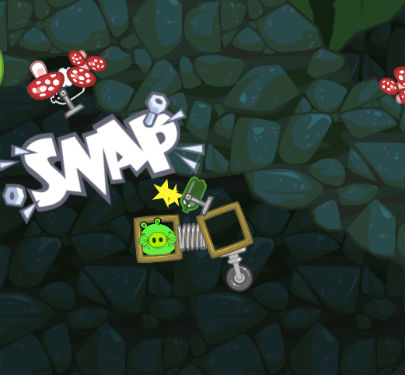 'BAD PIGGIES IS A PROMISING START'

Bad Piggies' levels aren't nearly as fast as Angry Birds. They require attention and patience as the pig slowly travels from one end to the other. Unlike Angry Birds, it's not as easy to play on a subway or during a coffee break. The main game is a fine distraction, something to do with your hands while watching sitcoms or talking on the phone. Once that's been completed, the real heart of Bad Piggies is offered as a reward, and the player can create and experiment in the adorable, strange world. Rovio has already left a spot in the game's menu for a future update. Hopefully they focus more on the Sandbox direction and less on guided stages.

The Angry Birds phenomenon developed over years like a snowball rolling down a mountain, expanding with each update. Bad Piggies is a promising start. Like the jury-rigged craft, how far it goes will depend on what its creators choose to add.