Borderlands 2 is Gearbox's chance to properly execute on a concept that only barely came together in 2009's Borderlands.

Borderlands was, in hindsight, propped up largely by a hope and a prayer. Taken only by its design, it's a collection of parts from multiple genres - the quests of an MMO, loot influenced more by action RPGs like Diablo, and shooting out of, well, a shooter. None of these parts were exemplary, and they were even combined in what could be affectionately labeled a haphazard way. But the combination was new, and it was glued together by virtue of a coherent visual style that mimicked hand-drawn art. It felt new, which compensated for how patchy everything felt.

Gearbox has taken a fresh look with Borderlands 2 at the often weak connective tissue linking the pile of divergent ideas that defined its predecessor. The story is developed and surprisingly thoughtful, and systems link together more. The result is a better game in almost every regard and, interestingly enough, a more ambitious one. However, a clearer vision from the start doesn't prevent Borderlands 2 from straining in several design directions at once. 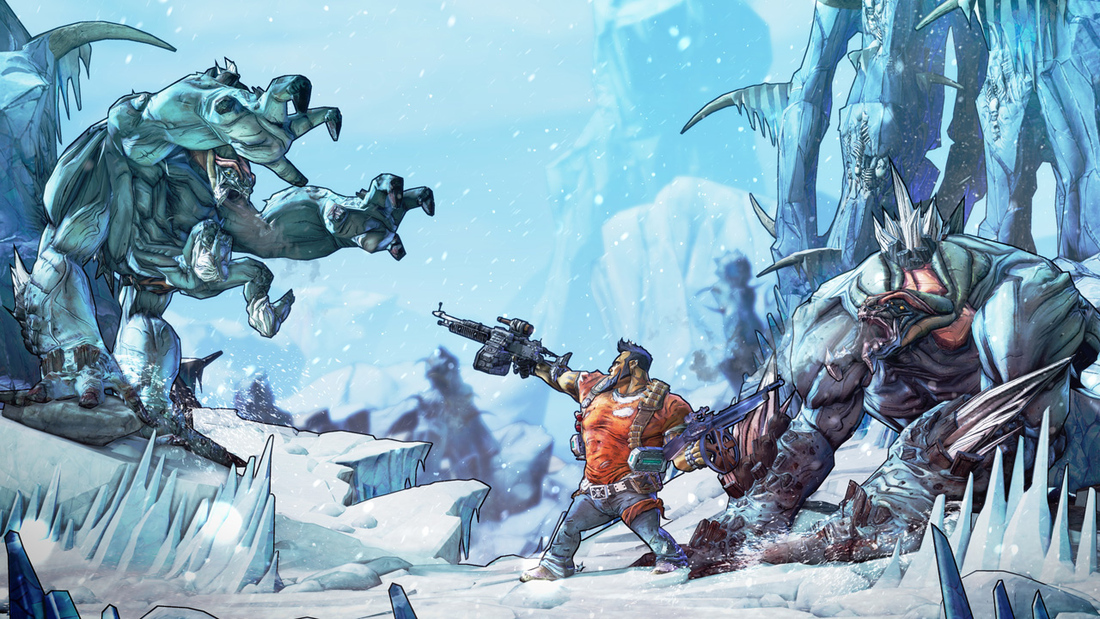 Borderlands 2 exists in a state of post-Vault hysteria. The Hyperion corporation has seized control of the world of Pandora, seeking to control a mysterious and powerful substance known as Eridium that's emerged from the planet's surface. Hyperion has set out to lure more self-styled Vault hunters to Pandora in order to further a mysterious plan regarding a powerful alien technology.

Character classes have seen some significant changes in Borderlands 2. The Siren class has been rejiggered and given a new primary talent, the Soldier class has been replaced by the Commando, the Hunter is now the Assassin, and the Berzerker has been replaced by the, er, Gunzerker. Borderlands 2's basic structure is the same, however. You gain experience through completing quests and killing enemies, earn points to customize your character's abilities, and drive around a large wild-west future causing as much havoc and as many explosions as possible.

Borderlands 2 is more deliberate in its setup and narrative than the original, though. WhereBorderlands felt like a collection of stuff that happened, linked together by the MacGuffin of "The Vault," Borderlands 2 starts personal, and builds a story out of the history Gearbox established last time around. Writing is easilyBorderlands 2's biggest strength. The setup allows for some great plot and character moments, and humor that feels more directed and less random - though I still laughed out loud at some ridiculous dialog bits throughout the game.

The original Borderlands was also in desperate need of a proper villain, which new series heavy Handsome Jack pulls off with aplomb. Initially cartoonish and distant,Borderlands 2 builds a joke into a character with motivations and, well, humanity. Jack isn't the only character to receive so much attention, but he is emblematic of a more coherent vision for Borderlands 2's world and the people living in it. The story uses humor to create a tone, and it leveraged that tone to confound my expectations. Who would have expected moments of pathos or emotional triumph in a game with an NPC by the name of "Shooty McFace?"

In fact, Borderlands 2's story did a much better job of propelling me forward than the level and objective design did. Borderlands 2 starts slowly - the first few hours are a tutorial, more or less - and it often falls into the strange trap of yo-yo mission structure. Too often, quests involve a character or place as a sort of hub from which you'll be thrown into an environment you've already explored to find or kill a thing, at which point you'll return to the hub, turn in, and be sent right back out to find/kill the next thing on the list. 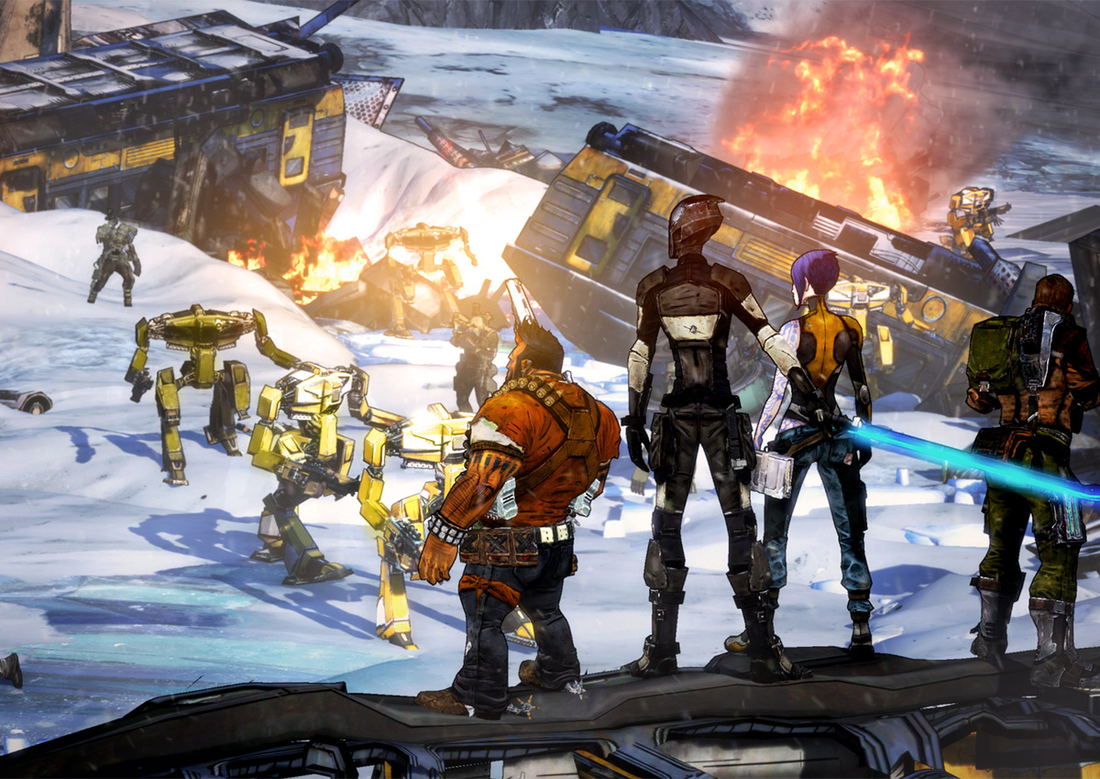 Gearbox was rightly criticized for a lacking PC version ofBorderlands. But things have changed with Borderlands 2 -they've improved so much it's easily the version to buy, if you've got the kit to run it and the friends to play it with on the platform.

Technically speaking, the options available to PC players rival even the most technically accomplished PC exclusives. While the lack of hardware anti-aliasing may bother some sticklers, they'll likely be encouraged by field-of-view settings, ambient occlusion, depth of field, and framerate caps from 30 to 120FPS.

For everyone else, the proof is in the play. Borderlands 2 on PC at 60 frames per second is a smoother, better experience than its console counterparts. Control response is faster, and even moderately capable systems are unlikely to suffer the major framerate hits that the 360 version suffers when an elemental barrel chain reaction rocks the screen. And Borderlands 2 looks much clearer and much sharper at 1080p than the lower resolution pulled off on consoles.

As might be expected, the main point of contention for some players will be the number of friends they have who can join them on Borderlands 2 on PC. Co-op is clearly the optimal way to play, so in the end, a willing suite of willing cohorts might be the deciding factor.

My advice: find them. Borderlands 2 is a vastly superior experience on the PC..

Sometimes that new bullet point will have you trace your steps over the same ground you just covered, killing enemies you already killed, looking at the containers you opened the last time you wandered through. It feels like filler, to be honest. More specifically, it feels like MMORPG quest design of the worst kind, designed to pad length and keep butts in seats, to borrow a phrase.

It doesn't make any sense, since Borderlands 2 would be very long without the padding, much less with it. After about 30-35 hours, I was level 31 and "beat" Borderlands 2, at which time I had dozens and dozens of unfinished sidequests and areas I had only superficially explored. Gearbox's expanded Pandora isbig. It has nooks and crannies and crannies inside of nooks, and I was flabbergasted that I was retreading so much of it when I had so much of it left to explore.

Forward progress is often a pain amidst Borderlands 2'saggressive level-gating of the series' all-important loot. Make no mistake, your life depends on finding more powerful guns about every few character levels. But unless you're doing every sidequest you're assigned, you'll constantly find guns in story missions that are a level or more above your current status. Finding new awesome gear you can't use takes a lot of the fun out of it. It also makes helping out lower level players with loot drops more of a chore, since it means keeping around under-leveled, outdated gear. 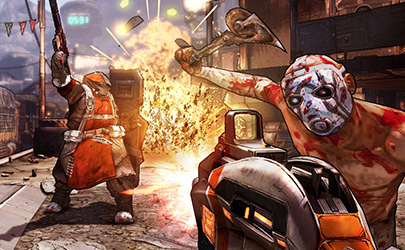 There's a sense of a constant grind. The basic gunplay that underpins Borderlands 2 is adequate to get things done. But it's nowhere near the responsiveness and encounter design of more dedicated shooters. The left-trigger aiming mechanic is paired with very aggressive auto-aim, so hitting things isn't a problem - it's just not very exciting. This makes clearing areas devolve into a same-y sort of job, rather than something fun.

There is a weak-point mechanic in play that goes beyond headshots all day, every day, which shakes up basic combat. Robotic enemies are best handled via shooting at their joints and dismembering them, and some human enemies will react in unexpected ways if you assume their noggin is the fastest way to a kill. There's also a larger focus on elemental damage inBorderlands 2. In Borderlands, you could ignore elemental resistances most of the time and only make your life a little harder. In Borderlands 2, you'll be switching elemental types often, sometimes on the same enemy. When shielded, armored enemies showed up, I scrambled to make sure I had hot-keyed a weapon of each main type for quick access. 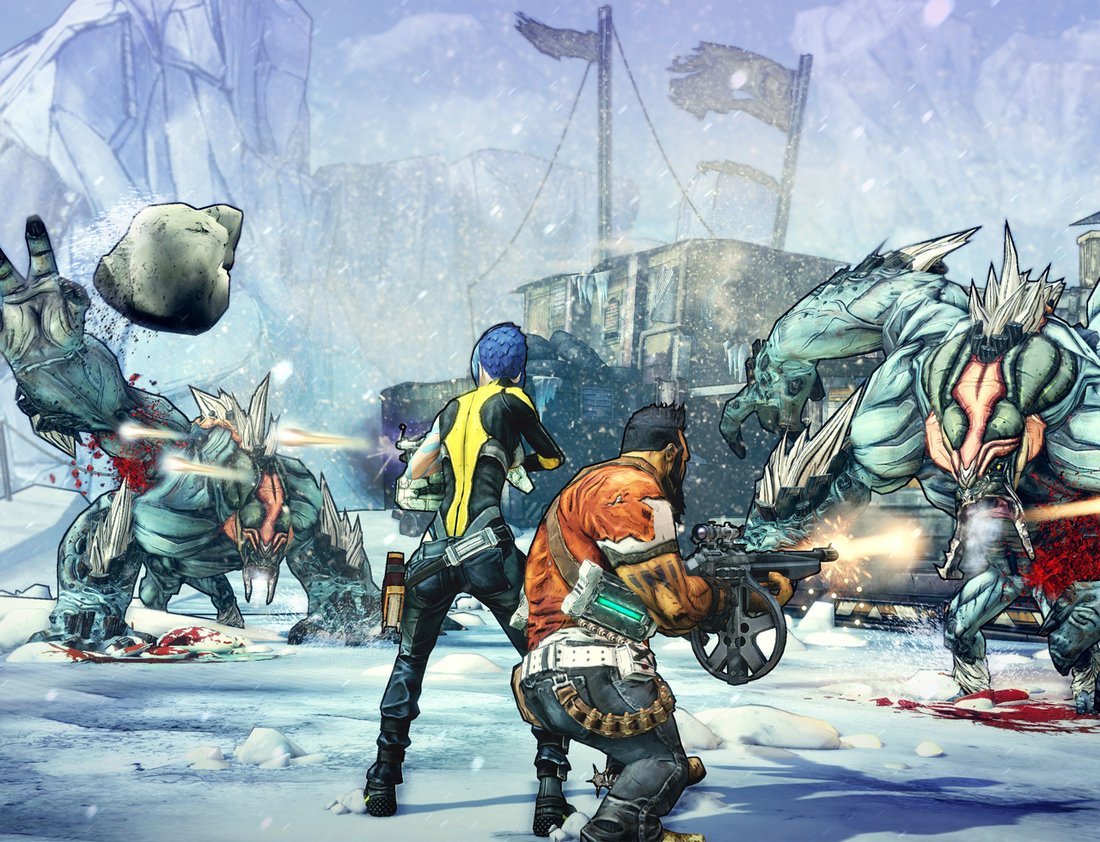 CO-OP ISN'T INSPIRED, BUT IT MAKES SOME OF THE MONOTONY MORE TOLERABLE

This elemental juggling act and the dismemberment actually helps make combat better later in the game, forcing consideration of weapon choice that few shooters manage. The shooting itself isn't more fun, but enemy management becomes its own sort of reward.

That kind of battlefield micromanagement can descend into a chaos of explosions and desperate attempts to come back from the brink of death in co-op. Borderlands 2's co-op mode goes the sadistic route of making everything much harder when more players are present, but it's worth it. Co-op isn't especially inspired - interfacing with other players is still crude in comparison with other loot heavy action games, and loot and ammo is shared among all players rather than being player specific, as in Diablo 3, which can make for some tense moments and heated arguments over rare finds - but it makes the more monotonous segments more tolerable. 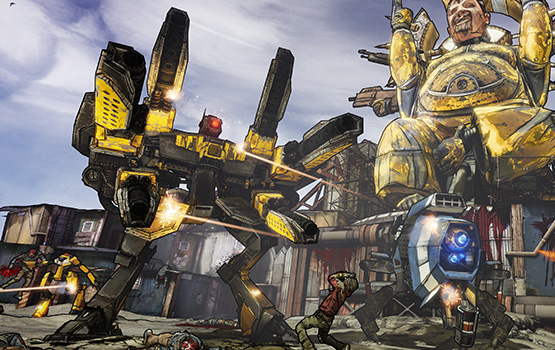 Almost every trip back to the main hub of Sanctuary offers several opportunities to upgrade your character. Completing in-game challenges awards Bad-Ass ranks, which can in turn be used to select a permanent upgrade to your character, which in turn also applies to every new character you create. The new purple Eridium ore doled out as a reward for missions and dropped by various enemies is used to upgrade carrying and ammo capacity, and of course each experience level gained allows for an upgrade to each character classes unique skill tree. It feels like no matter what you're doing, you're always improving your character. It's empowering.

The key to the Borderlands last-minute redesign was the look; the "concept art style" that fused cartoon quality hand drawings with photo-realistic computer graphics. For a small team, working in the panicked environment of 11th hour crush, seat-of-pants design is par for the course. For an expanded team, working on a sequel, there have to be rules.

Rule number one for designing Borderlands 2: Ignore the rules.

"Each artist brings their own craziness to the table," says Jeramy Cooke, art director. "In a lot of games I would be like: 'Well, this is World War 2 so this would not happen, so you're going to have to redo this.' In this game it's like: 'That's pretty insane, man. OK, let's do this!' It's a very different attitude because as long as it kind of points in the right general direction, it usually works."

Read more about the creation of Borderlands 2 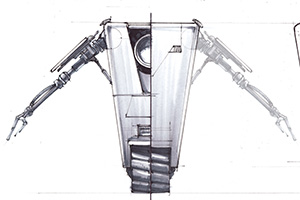 BORDERLANDS 2'S QUEST DESIGN RUNS IN CIRCLES, BUT THE WRITING AND COMBAT DESIGN SET IT APART

Co-op and excellent writing make Borderlands 2 worth checking out, but it can't escape occasional bouts of fatigue and repetition. It creaks somewhat under the pressure of needing to be more without the lightning-in-a-bottle newness that propped Borderlands up. The shooting still lags behind other first-person frontrunners, and combat too often feels like an afterthought in Borderlands 2's enormous world. It's often mired in the design problems of the genres it borrows from.

Borderlands 2 is unquestionably a better game than Borderlands. The new emphasis on elemental weapons and dismemberment make for better combat scenarios, and the constant character improvement is a great push forward for players looking for long-term rewards. But sticking around for those payoffs requires more patience than I'd hoped.