By introducing human error to AI players and bringing real-world soccer coverage to the game, FIFA 13 is better than it's ever been.

FIFA 13 reminds me of why I love sports: At their best, they offer a terrific blend of intense competition and extraordinary athleticism, underpinned by the enthralling uncertainty of human imperfection. Simulation sports games struggle with accuracy because at heart, they're mathematically driven systems that must replicate diverse, dynamic activities — activities that are compelling mainly because they're unpredictable.

FIFA 13 remembers that athletes aren't robots. The players on its digital pitch seem recognizably human, imbued with all the advantages and shortcomings that label entails. EA Canada has given them the smarts to play as a more cohesive attacking team while implementing the wild card of human error.

Competition ties FIFA 13 together: Nearly every mode allows you to measure yourself against other online players. And FIFA 13's integration of developments in real-world soccer does what the best sports simulations do: It keeps fans connected to their favorite sport.

The first link in FIFA 13's chain is the gameplay core itself. EA Canada has iterated on last year's physics engine, eliminating most of the laughable collisions between players and the physically impossible positions their limbs could be forced into. The new ability to jockey for position while trying to secure a loose ball brings physical play into the game, allowing imposing players to exercise their size and strength against more delicate sorts.

But the most vital, noticeable change is First Touch Control. In previous FIFA titles, the ball seemed stuck to a player's foot, and it was difficult for defenders to win possession. First Touch Control introduces situation-dependent variation into the ball physics: It's now much harder to trap a speeding, chest-high goal kick in the rain with a defender on your heels than it is to receive a soft pass at your feet in stride. That's reasonable and realistic; even the world's best players can't often trap a ball with a single tap of the foot. 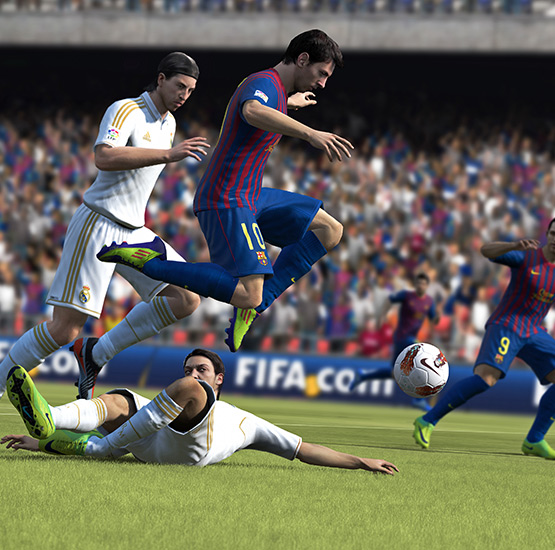 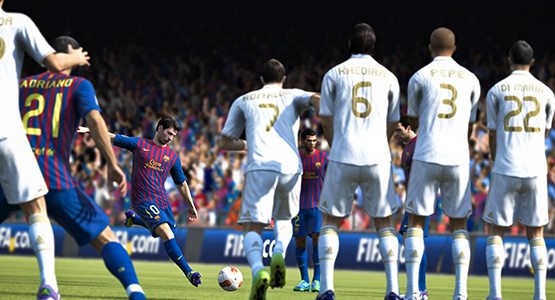 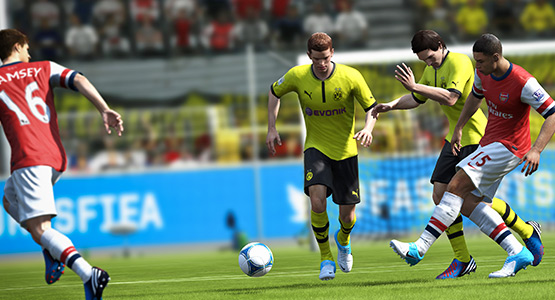 This change humanizes FIFA 13's players, serves as a tutorial-by-gameplay-mechanic and changes the flow of the game. Seeing a fast, off-target pass bounce away from its intended recipient is gratifying as a lifelike reminder of human error, but it also works as a teaching moment: Next time, maybe you'll put less leg behind the pass. And by demagnetizing the ball from players' feet, First Touch Control creates opportunities for possession change, opening up the game considerably.

If you can hold on to the ball and mount an attack, you'll benefit from FIFA 13's smarter teammate AI. When I led the rush, the rest of my squad came up to support me, whether by doing their best to stay onside, dashing toward the net to give the team more scoring chances, or getting in position for rebound opportunities. That intelligence is a quality I've always sought, but rarely found, in AI teammates.

They mostly go where you'd expect sentient players to go and do what you'd want them to do — at least until you're on defense. When the opposing team was on the attack, my defenders tended to be too passive, especially near our net, yielding shots and goals too easily. Their lax play forced me to be more proactive on defense than I expected I'd need to be, based on how intuitively my AI teammates supported me on the attack.

FIFA 13's voice-only Kinect controls are notable not just for their specificity, but also the ability to customize them. You can shout at your TV to change tactics, formations, strategy, camera angles, and players on the fly. I wish substitutions allowed you to say players' names, but with the tens of thousands of athletes in the game, that's probably asking a bit too much.

More useful than generic commands like "mentality, defensive" is the option to assign particular changes in tactics, formation, and mentality — as well as a combination of those elements — to a particular trigger phrase. Once I remembered that I had assigned an "ultra attacking" mentality change (and a shift to an offense-first formation) to the phrase "go all-out now," the situation-dependent command proved to be a practical shortcut that was easier to use than memorizing the associated button prompts. 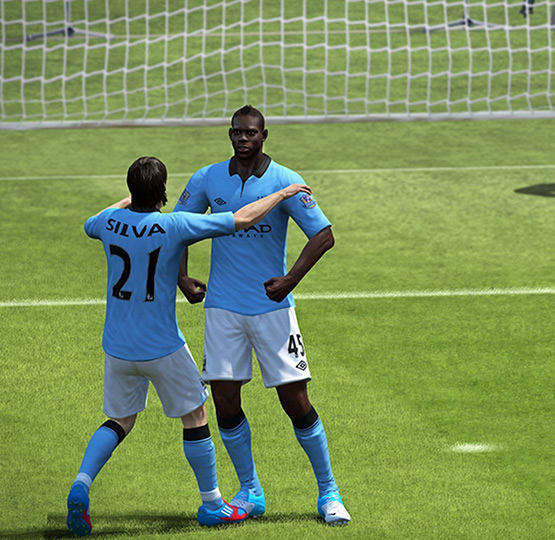 In case any of those soccer skills and tactics sound unfamiliar, FIFA 13 offers a comprehensive interactive tutorial that teaches techniques in eight areas of focus. Leaderboard integration throughout is a smart touch that kept me going back to better myself. As a relative novice when it comes to soccer and the FIFA franchise, I found the Skill Games tremendously useful. Tutorials are crucial in a game with as broad an appeal as FIFA 13, so it's nice to see them done well. They didn't immediately turn me into a superstar, but I learned a lot.

Once you've honed your skills, you can take FIFA 13 online. In addition to the EA Sports Football Club, which rewards every in-game action, most of the main modes offer their own persistent progression to make online play engaging. Even a match with a buddy (an "online friendly") kicks off a five-game series between the two of you, a framework that ups the ante in the rivalry. The pervasive networking maintains a strong bond between you and the massive community of FIFA players worldwide; I enjoyed the way FIFA 13 constantly pushed me to compete online and improve my skills.

MATCH DAY SHAKES UP THE COMMENTARY

In an attempt to fold in real soccer coverage and events, EA Canada has created Match Day. The feature brings in consistent updates on news, injuries and hot/cold player trends from clubs in the English Premier League, Spain's La Liga and other organizations. I would have liked to see Match Day split off into its own play-along-with-a-club mode, as 2K Sports has recently done with similar elements of its games.

The in-game commentary may be generic, but I still found myself amazed to hear Martin Tyler and Alan Smith discuss a player's contract dispute while a pre-match visual overlay highlighted Arsenal's Theo Walcott (he's currently in negotiations with the club). I appreciated Match Day's subtle blurring of the line between the real and digital worlds — it's an elegant way to shake up the commentary.

FIFA 13 is a better soccer simulation than ever, but it's about more than that. The player-on-player and player-on-ball interactions, along with the AI improvements, sell the look and feel of true human interaction on the pitch. The infusion of real-life soccer developments throughout the game makes the experience come alive; you feel like you're part of a vibrant, passionate community of soccer fans. FIFA 13's mechanics bring that human element to the fore, and its connected experiences highlight our shared global identity as participants in the enjoyment of the beautiful game.