While it may not usher MMOs into a markedly different future, Guild Wars 2 brings together everything good about the genre.

Guild Wars 2 is not the MMO messiah. For the last few years, long-time MMO players have looked to a growing list of titles to steal the crown from World of Warcraft and lead the genre into a promised land of growth and innovation. From Rift to Star Wars: The Old Republic, many have tried and failed while eager fans and hyperbolic press releases positioned them as game-changers.

Guild Wars 2 is the latest makeshift leader of the desired MMO revolution. It's the biggest departure in fantasy MMOs since World of Warcraft in 2004, but it's not the genre-shifting earthquake that some are demanding.

Instead, Guild Wars 2 is built on the MMO model introduced in EverQuest; it offers a deep understanding of and reverence for what made that early MMO special. Every one of Guild Wars 2's complex, interlocking pieces is familiar but imbued with a sense of discovery. A smattering of launch issues and lack of in-game tutorials make it harder to immediately appreciate all it has to offer, but a little work reveals something distinguished. Guild Wars 2 is not the MMO of tomorrow; it's the purest concentration of the MMOs of today.

Guild Wars 2 is not the MMO of tomorrow 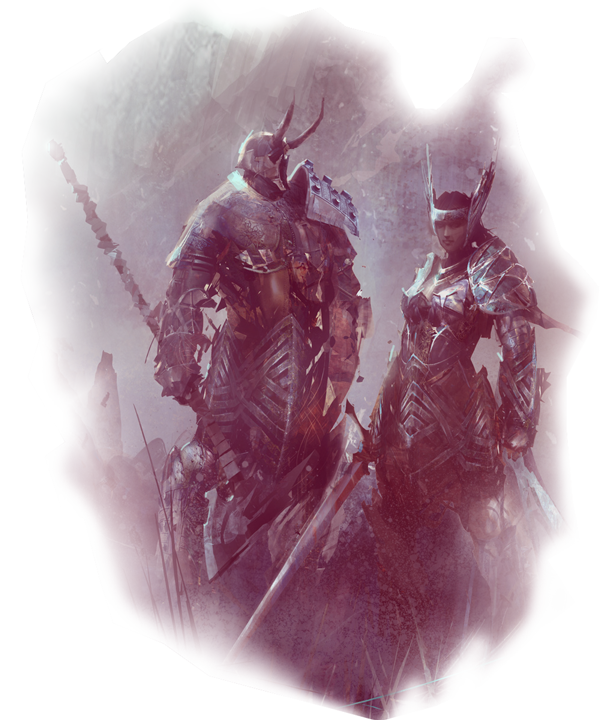 Guild Wars 2 finds its biggest departure from other MMOs in its responsive combat. The game's eight classes range from fantasy standbys like Warrior and Thief to unique additions like Engineer and Mesmer, all sharing a focus on movement and positioning in battles. Major attacks from enemies can be avoided, and skills don't restrict movement. Characters can even move around while preparing abilities with long cast times. Guild Wars 2 doesn't embrace the full-on action feel of TERA, but it's reactive enough to make challenging dungeons and world boss raids even more frantic and fun.

To help facilitate that action, Guild Wars 2 sticks to a single row of ten abilities rather than a screen full of buttons. The first five abilities switch automatically based on which weapon type you have equipped, and the other five can be swapped out from a deck of skills purchased using skill points. Fast weapon swapping aids Guild Wars 2 in ridding itself of the MMO "holy trinity" - damage, tank, and healer - instead allowing classes to smoothly fill multiple roles.

My chosen class, the Guardian, moves between a damage-focused two-handed sword, a mace and shield combo that mitigates a portion of the incoming attacks, or a scepter or staff, which grants skills devoted to slowing enemies down by placing a barrier in front of them. Using secondary skills, I can broaden my attack options, buff up my group, or toss out area-wide heals. The eccentric, open-ended classes leave room for devising unique strategies, even as new skills show up more rarely. Guild Wars 2's combat requires timing and smarts, regardless of your class, your weapon choice, or whether you're a level one scrub or decked out in the best armor in the game.

Getting to a point where you fully comprehend that combat system can be a challenge. After a very brief tutorial segment that's light on explanation, players are tossed into Guild Wars 2's huge world without further in-game clarification of the options available. If you haven't played an MMO before, you're going to be lost. If you have, you're likely to be baffled by ArenaNet's tweaks to the genre. 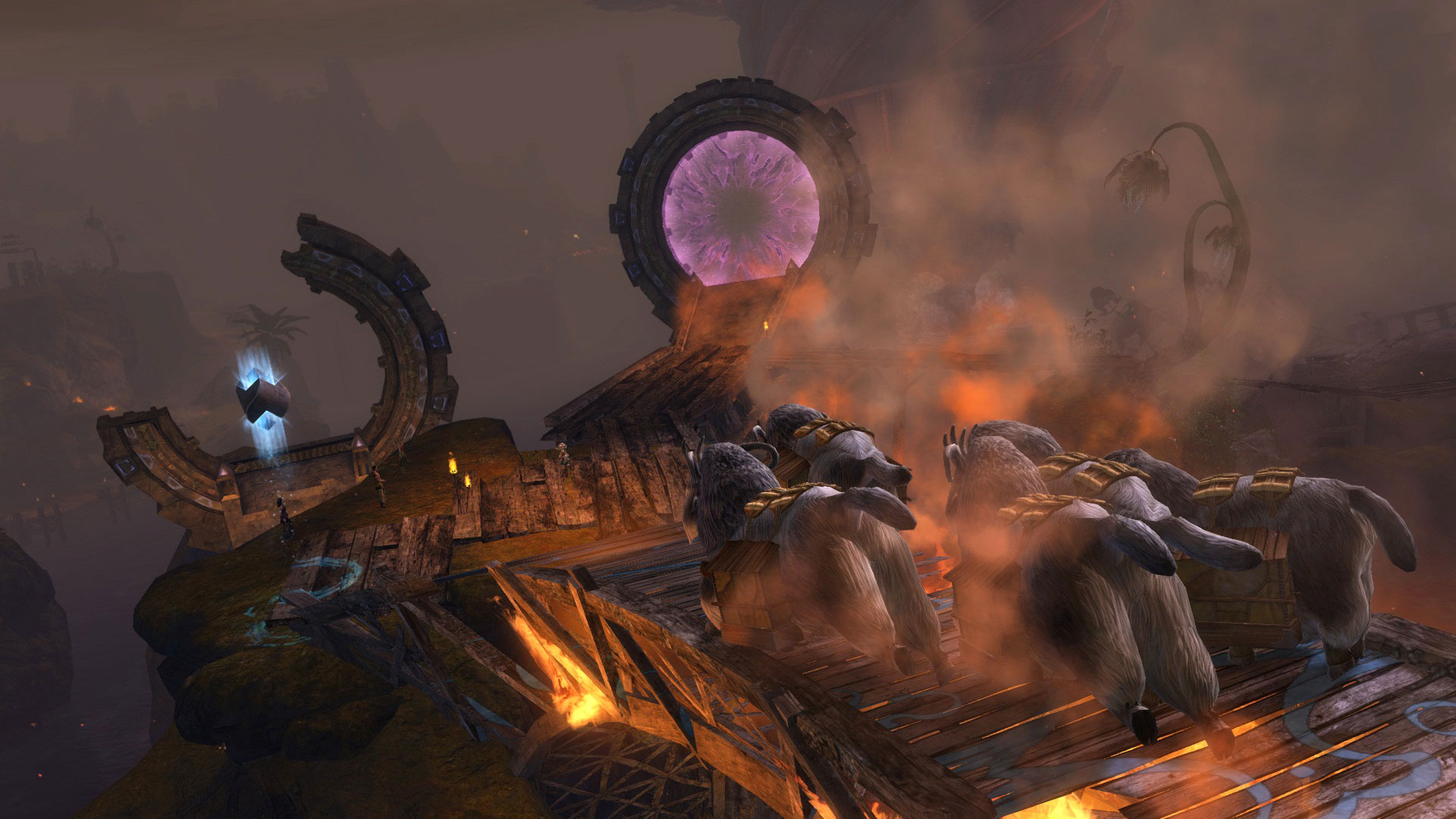 This initial opacity is an unintended side effect of Guild Wars 2'sthesis: The reason people play MMOs is to explore. Hand-holding is minimized, and every act of exploration is rewarded, from harvesting a field of vegetables to reaching a high cliff after a perilous climb. As you uncover regions of the game's 20-plus zones, the map fills out with dozens of symbols pulling you in every direction. Once you learn to read the map, goals accumulate quickly, and every zone can be scoured from corner to corner for hours.

Guild Wars 2's replacement for traditional questing keeps the journey open-ended. Where most MMOs tunnel players through a linear series of quest-givers, in Guild Wars 2 you're rarely required to talk to anyone outside of brief story quests. Each zone has ten to fifteen quest areas, each of which adds a quest tracker. Some areas task you with defeating enemies, but many suggest non-combat goals, such as repairing broken machinery, stomping spider eggs, or delivering baskets of fruit. When you finish, your reward is doled out via in-game mail, limiting downtime.

In its greatest addition to the MMO genre, Guild Wars 2 perfects the dynamic event system that has popped up previously in games such as Warhammer Online and Rift. As you explore, your UI will alert you to nearby dynamic events that you can choose to take part in or ignore at your leisure. These events give huge experience point and gold rewards, pushing players to team up and help each other on the fly, even when they're technically not grouped.

Success or failure will lead into subsequent events, reshaping a zone's landscape based on your actions. Guild Wars 2 changes the difficulty and frequency of dynamic events based off the number of players nearby; in forty-plus hours played across a wide variety of zones with varying populations, I have yet to hit an event that I couldn't complete because other players weren't around.

Though it comes loaded with a high level cap of 80, Guild Wars 2 encourages players to take their time with a mostly flat and speedy leveling curve. Even if you rush to level up, Guild Wars 2 automatically bumps players down to match the level of the area they're currently adventuring in, guaranteeing that every zone will always provide a little bit of challenge. Some players will miss being able to tornado through low-level zones destroying everything in their path, but Guild Wars 2's content demands engagement regardless of level, and that's an impressive feat. 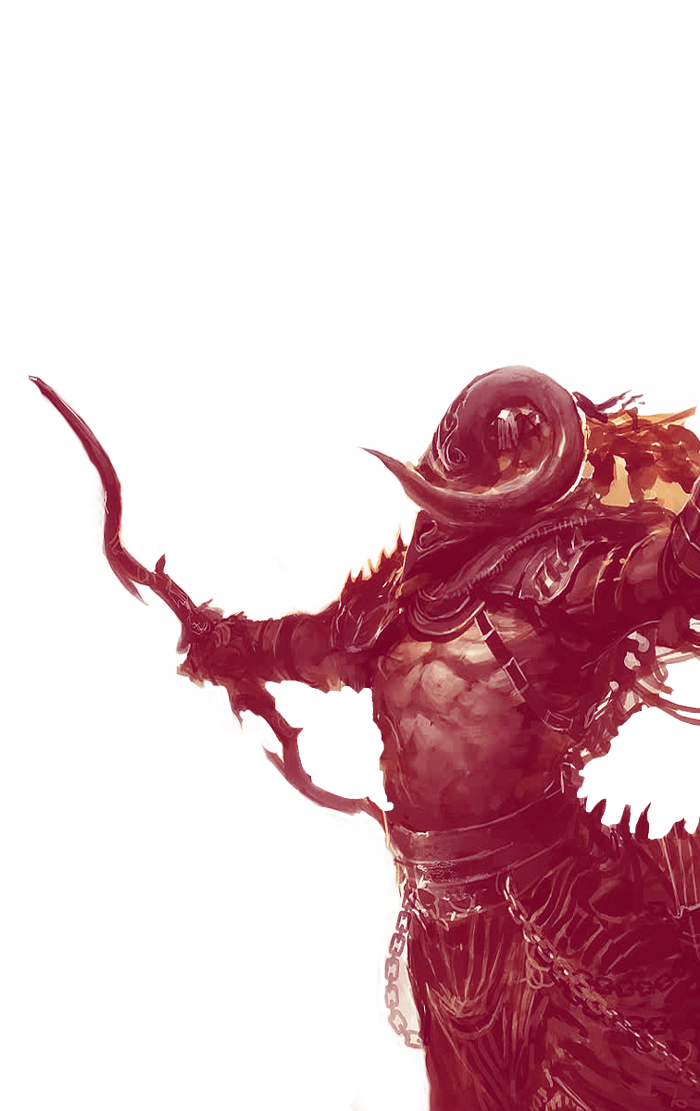 Your current level also provides no barrier to Guild Wars 2's shooter-inspired player-versus-player offerings. When you jump into PvP, your character is pushed to level 80, given a full set of PvP armor and weapons, and given access to all abilities. You can mix and match weapons, bonus items, and skills to build whatever loadout you want before choosing from a list of servers with rotating maps.

Setting opponents on an equal playing field is a wonderful change that makes PvP in Guild Wars 2 immediately approachable. In most MMOs a lack of high-end gear would prevent me from competing; in Guild Wars 2 I performed admirably in my earliest match-ups simply by merit of knowing how my class works. It's hard to tell if Guild Wars 2's mostly visual rewards for ranking up in PvP will be enough to keep players hooked, but for now the trade off is worth it.

PVP is complemented by the World-versus-World tug of war, which pits three servers against each other for control of territories on four persistent maps. These zones are gigantic, requiring planning, flanking, and siege weapons if you want to reap long-term, server-wide benefits. Five-minute skirmishes in PvP and hours-long WvW encounters alike are testament to Guild Wars 2's invention and execution.

GUILD WARS 2 ISN'T THE MMO MESSIAH, BUT IT IS THE BEST THE GENRE'S SEEN IN YEARS

A handful of technical issues — a rarely-functional auction house and glitchy social features among them — and poor tutorials only barely impact the addictive, infinitely explorable world that ArenaNet has crafted in Guild Wars 2. The genre's flaws all still exist here. The never-ending MMO treadmill still gets exhausting, even when you can periodically shift your efforts to other, tinier treadmills. But Guild Wars 2 hides those flaws admirably and magnifies the genre's strengths better than any game since World of Warcraft. It folds in the soloability and storytelling that's become a trend for recent MMOs while creating a world and gameplay systems that naturally urge people toward playing together. It rewards skill and variety rather than mindless grinding. And it does all of this in a massive, persistent world without asking for a subscription fee.

So no, Guild Wars 2 isn't an MMO prophet leading its flock to a glorious future. But that doesn't stop it from being the best MMO in years.

Our review of Guild Wars 2 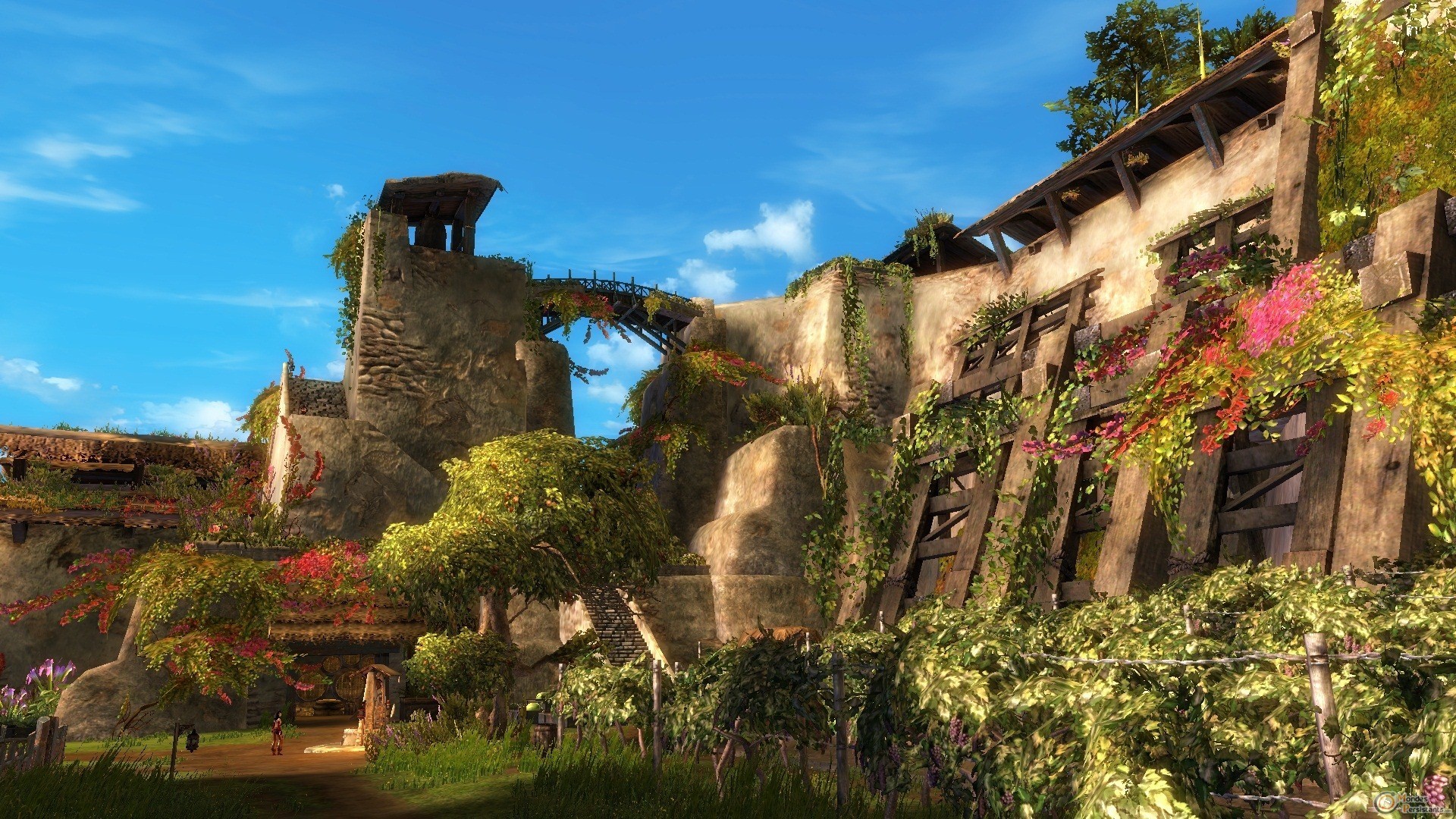 If there was one concern I had about Guild Wars 2 when I initially reviewed it in September 2012, it was the future. An MMO lives or dies by its updates, and since ArenaNet chose a non-subscription model for its game, it theoretically had less reason to provide consistent, free content updates.

I'm happy to report that if that temptation existed, Guild Wars 2 has dodged it completely. While the game had big updates monthly from the start, beginning in April of 2013 ArenaNet launched an ambitious plan to provide meaningful new content every two weeks for free. It sounded unbelievable — it still does! — but it has been pulled off almost flawlessly.

These updates run the full gamut of what's available in Guild Wars 2. They've included new zones, more story content and changes to the player-versus-player and world-versus-world systems. Most recently, ArenaNet introduced a major overhaul to character progression and some huge quality of life changes in a rare mechanics-focused update. 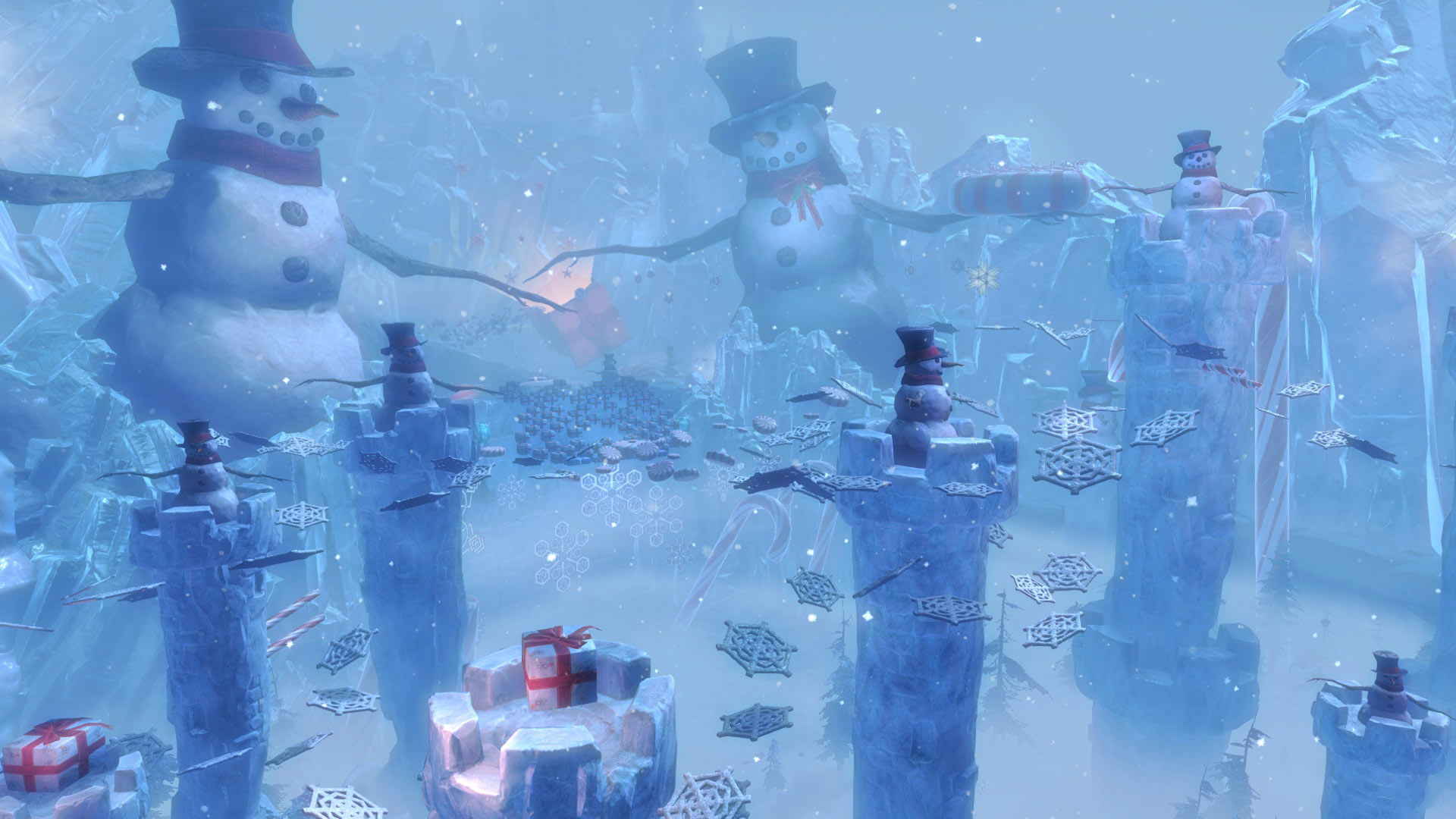 While Guild Wars 2's population has fluctuated, the mix of constant new content and no subscription fee has made it easier for players to jump back in whenever they feel like. And the additions to the game are, by and large, very good — whether it's wacky platforming challenges like the April Fools Day-themed Super Adventure Box or serious ongoing stories like the saga of the villainous Scarlet Briar and her effects on the whole world.

ArenaNet is not only matching the quality of update I'd expect from a subscription-based MMO, it is surpassing the quantity by leaps and bounds. Between the unmatched speed and the dedication to these updates, Guild Wars 2 has improved greatly from its already impressive launch.

Our review of Guild Wars 2