Hell Yeah! Wrath of the Dead Rabbit reminds me of this guy I knew in high school.

Let's just call this guy "J." J pulled me in with irreverent charm and a non-stop stream of jokes that were goofy, if not exactly witty. But eager to entertain as he was, J couldn't turn off the act long enough to buckle down and focus on the fundamentals. Everyone could see that he had the potential to do something with his life, just as plainly as we could see that he was wasting that potential.

Hell Yeah! is that guy.

Hell Yeah! shows all the signs of a much better game - a huge variety of enemies, beautiful hand-drawn art, and more. But it's too busy lobbing out inside jokes to improve on its flaws. Like my old high school buddy, Hell Yeah! is a class clown that refuses to grow up, its antics eventually growing tiresome. 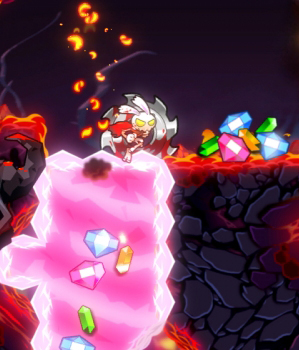 Hell Yeah! Wrath of the Dead Rabbit tells the story of Ash, the titular bunny prince of Hell. Ash's reputation as a bad-ass is threatened when pictures of him bathing with a rubber duck are leaked, so he sets out on a journey to hunt down and murder the hundred-plus denizens of the underworld who saw the embarrassing photos.

Ash's madcap revenge quest leads him through individual zones of Hell themed after museums, casinos, space, and more. He uses a recognizable formula of 2D platforming to navigate these areas, but the addition of a strange jetpack mechanic complicates jumping. Ash's leaps are lengthened based on how long you hold down the jump button, which is afflicted with enough granular unpredictability that it's easy to over-or-undershoot your landing.

Hell Yeah! provides Ash with a unique method for disposing of its small army of bosses and mini-bosses. These major foes require you to weaken them using either the giant saw that Ash rides or his arsenal of guns. Once an enemy's health bar is emptied, Ash finishes it off with a fatality performed via a lightning-fast mini-game. From the elevator music to simple objectives that never require more than a few quick button taps, Hell Yeah! has drawn a lot of inspiration from Nintendo's hyperactive WarioWare series for these mini-games.

The mini-games are also the worst thing about Hell Yeah!

They serve a single aesthetic purpose: showing off Hell Yeah!'s zaniness. They're full of brief references to other games - the videogame equivalent of a seven-year-old kid rattling off lines from his favorite movies without any context or cleverness. RememberGuitar Hero? Hell Yeah! has a mini-game that's kind of like that. Remember 8-bit RPGs? Here's a 10-second homage to those. "I know about this thing that you also know about!" the game screams. Which is cool, I guess? 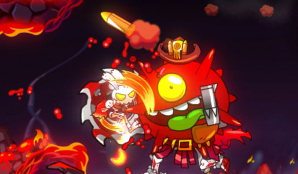 The mini-games prove a bigger failure when they disrupt the Hell Yeah!'s rhythm. I would often take down a challenging enemy, only to be caught off guard by the sudden shift to a trivia challenge with a confusing question and a dizzying timer. If I failed the mini-game, the monster regained a portion of his health and Ash took a huge chunk of damage. If it was enough to kill me, I was left wandering back to the boss from some faraway checkpoint.

This annoying cycle even repeated on the final boss - an exhausting five-part encounter where you start from the beginning every time you die. 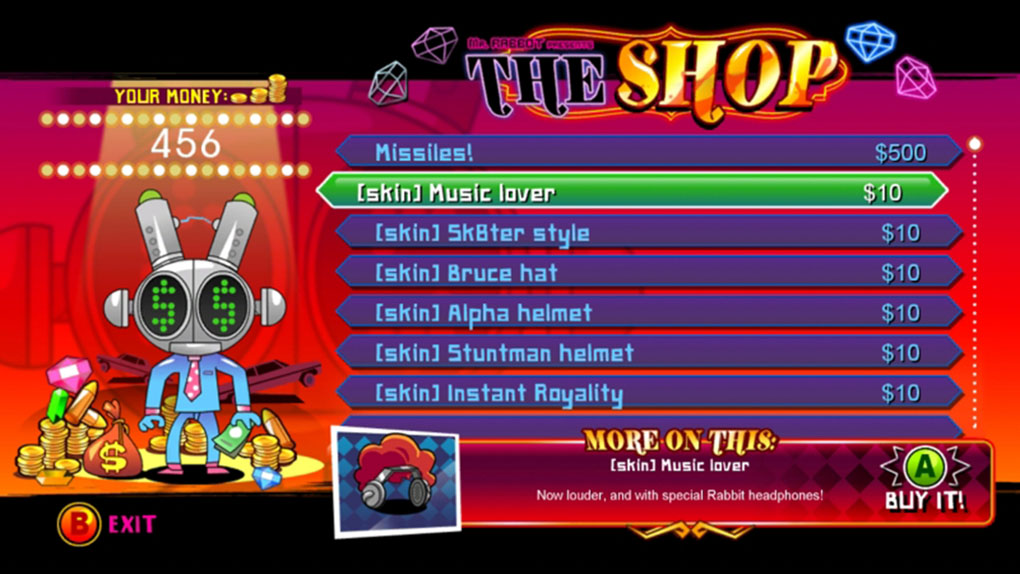 Sketchy checkpoints are a major problem outside of boss fights too. Later sections of Hell Yeah! are overrun with spikes, lasers, and other traps, approaching a Super Meat Boy level of infuriating challenge but without that platformer's tight controls or quick restarts. The frustration of falling into a pit and instantly dying for the third time in a row is exacerbated by treks of up to twenty minutes between checkpoints, unless you go out of your way to return to an auto-saving healing area.

You're going to find yourself backtracking to those healing areas an awful lot. In one of its most bizarre design choices,Hell Yeah!'s enemies don't drop any form of health refill. The primary baddies you're hunting can drain your health from full to zero in a handful of hits, but unless you find (or limp back to) a specifically designated healing zone in-between these fights, you'll have less and less survivability as you move forward. Oh, and those all-too-rare checkpoints? They remember how full your life bar is, so there's no immediate likelihood of lasting longer after you die.

The lack of health drops is such a huge oversight that it clouds over the whole experience. Hell Yeah! borrows the open-world, exploratory structure of Metroid and the run-and-gun challenge of Mega Man - games where enemies have a chance to drop items that refill your health bar. That possibility urges you to keep pressing on instead of running back to a healing point any time you take a few hits. The addition of health pick-ups wouldn't fix Hell Yeah!, but it would go a long way toward making it a less frustrating game.

Despite the Metroid skin it wears, allowing you to backtrack and explore at your leisure, Hell Yeah! carves a linear path through its stages. It provides no real rewards for filling out the map aside from the occasional purely cosmetic hidden costume piece.

Even Hell Yeah!'s colorful art style grates after a few hours. I began enamored by delightful animation and attention to detail in both the characters and the world, but those visual flourishes are designed more to look good than to enhance the game. Between random foreground elements concealing enemies and the general overabundance of stuff happening on screen at all times, you're bound to run head-first into an instant-death spike more than once.

Hell Yeah! also features a strange monster-collecting mode with little meaningful impact. Every boss you defeat is shipped off to "The Island," a flat, Flash-game-style area where you assign them to work at different stations, providing you with cash, new items, and other negligible bonuses. You'll need to quit out to the game's main menu just to check if anything has happened on the island, squandering its meager potential. 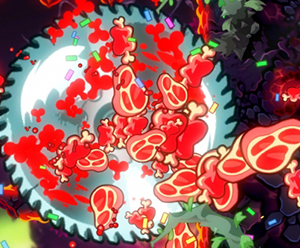 BEHIND ITS ARMORY OF PUNCHLINES, HELL YEAH! KNOWS THAT IT COULD BE A BETTER GAME

"Think our loadings are too long?" one of Hell Yeah!'s loading screen tips jokes. "It's a feature!" Well, actually, yes, they are too long. And that's not a good enough feature to make me check in on the island with any consistency. The self-effacing jokes reveal Hell Yeah!'s biggest secret: It knows that it could do better. And so do I.

Last year, I ran into J again. After dropping out of college and bumming around our hometown for a few years, he had finally cleaned up, found a job, and settled down. His sense of humor was as active and fun as ever â he just backed it up with a personality that I could stand being around. Good intentions are resting somewhere deep down at the heart of Hell Yeah! Wrath of the Dead Rabbit. I don't think that Hell Yeah! needs to get rid of its armory of punchlines; it just needs a lot more build-up to make them worthwhile.