Jet Set Radio HD is everything the original was, but time hasn't been kind to the stylish Dreamcast title.

Jet Set Radio HD is the latest remaster in a string of Dreamcast "hits" to see new life on download platforms, but Sega has been insistent that they've learned its lessons. The publisher has emphasized how hard it's trying to get things right this time, and for many, it couldn't have chosen a better game.

Jet Set Radio was part of Sega's onslaught of new properties with an emphasis on flash and style during the second wave of Dreamcast software, but it might be one of the more obscure. It's a game that almost everyone has heard of, but I think few have actually played. This was remedied somewhat with 2002's Xbox sequel Jet Set Radio Future. Unlike Sonic Adventure or the arcade hit Crazy Taxi, Jet Set Radio HD is the chance for many to finally play a game they've only heard about.

Nostalgia has the side effect of high expectations though, and Jet Set Radio HD just can't meet them. While the flash and style of Jet Set Radio HD remains untouched and unvarnished by a dozen years of progress, the rest of it can't stand up to scrutiny. Squirrely controls, camera catastrophes, and nonsensical level design make Jet Set Radio HD a better memory than game.

THE POLICE PRESENCE AND TIMER FORCE PRIORITIZATION OF OBJECTIVES

Set in a futuristic alternate-reality Tokyo, Jet Set Radio HD sees roving gangs on high-tech skates battling for turf via full-contact tagging. Your goals vary from level to level, but generally involve skating around a city landscape, tricking off surfaces to collect cans of spraypaint used to tag targets spread around, while avoiding the police. As you tag more and more spots, the police response escalates, from dudes with batons to tanks and helicopters. 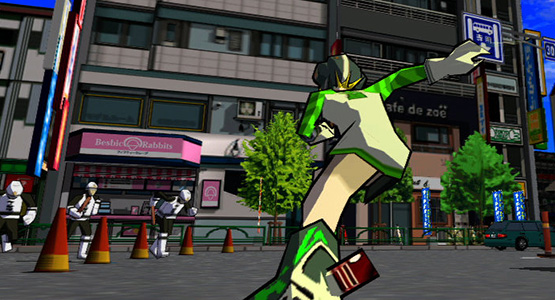 The police presence serves to give Jet Set Radio HD more depth than it would have otherwise, forcing prioritization of targets. Some tags can take a great deal of time spent standing in one place while performing ever-more complicated swipes of the analog stick, which is almost impossible amidst a hail of tear gas. In turn, you'll want to explore each level to collect enough paint to pull off the longer tags and to learn where you'll want to focus first if you want to finish each level in time, to say nothing of racking up big points and placing high up on the new leaderboards.

Ordinarily, a local police force treating incidents of graffiti like an insurgency in Fallujah would seem ... extreme, but Jet Set Radio's aggressive visual presentation mitigates that. It may not have been the first game to push the modern idea of stylized cel-shaded graphics, but it was the first to do it properly. Everything is bright, slick, and mostly playful. It's a testament to Jet Set's execution that even 12 years later, it looks even cleaner than it did on the Dreamcast. There's a minimum of tweaking, save for its new widescreen presentation - though it would have been nice to see some updated textures as well. Devotees to the original will be excited to hear that all but one of the songs originally featured in Jet Set Radio are present in this HD remaster.

Jet Set Radio HD marks Sega's most successful Dreamcast re-release, at least from a technical perspective. The care and effort to make sure players get the Jet Set Radio that was released in 2000, while accounting for modern expectations, is evident down to the aforementioned Xbox Live and PSN leaderboard functionality and widescreen support. That's also the problem. 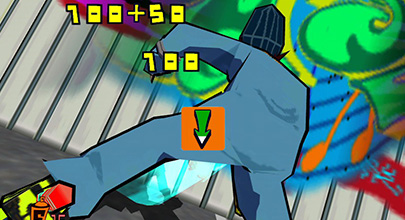 When viewed without the lens of nostalgia, all of Jet Set Radio'sfaults are apparent. Skittish controls aren't such a big deal at first, when Tokyo is small and each objective is visually obvious, but things get more complicated fast. As the police get more insistent, the controls basic failings and limitations are multiplied by cheap shots and extended falling and knockdown animations that leave you out of control of your character for entirely too long.

Even escaping the fuzz can backfire, courtesy of an abysmal camera. In Jet Set Radio HD's eagerness to show you a cutscene of police ineffectiveness, you'll lose all control of your character, often in the middle of a very demanding attempted grind or jump. Even in simple situations, the camera struggles, clipping through walls and obscuring the player character enough to make unreliable, unresponsive controls the least of your concerns.

All of these problems add up to a game that feels like less than the sum of its parts. Even the timer in the upper right corner seems present to force a sense of urgency in the desperate hope you won't catch how poorly everything is stitched together, to say nothing of the random figurative and literal blind alleys. For example, if you skate to one end or the other of some levels, there's an exit. To where? The level select screen. Why? Who knows.

I exceeded the limits of my patience with Jet Set Radio HD after about six hours. I had played the same level seven times, instructed to follow a rival gang in order to tag their backs and chase them off my gang's turf. After an hour of chasing, and missing grinds, and being knocked over by the faster skaters, and colliding with level geometry - and watching giant pieces of the stage disappear and reappear in the distance - I had almost taken the other team out, only to miss a grind. I watched my jump sail past the rail and I rolled into the level exit. My skater was recovering, and refused to respond to my inputs. As I exited the level without completing it, I had to let my controller go - at high velocity, in the direction of the floor 10 feet away. That wasn't where I stopped playing, but at that point, I was finished with Jet Set Radio HD. 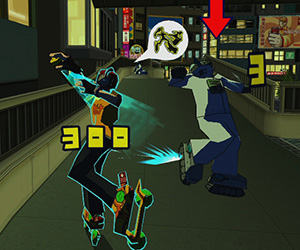 WHY IS THERE AN EXIT BUILT INTO LEVELS? WHO KNOWS.

JET SET RADIO HD IS FULL OF GOOD IDEAS, BUT THE GAME CAN'T LIVE UP TO ITS OWN LEGACY

In 2000, Jet Set Radio was an aggressive, desperate shot from a Sega in decline to make something different, something that caught people's attention. Now, 12 years later, time has scrubbed away everything but the game they released, and the spit-shine hasn't been kind. In every way, Jet Set Radio HD is a prototype, full of ideas only half-realized and poorly put together, ideas which would be put to better use in the much-improved sequel Jet Set Radio Future (which featured comparatively huge city levels of greater complexity and infinitely more-responsive controls). Jet Set Radio HD is the best Sega has pulled off with regards to their Dreamcast re-releases, but the game can't live up to its own monumental reputation.