The creative magic of LittleBigPlanet is the perfect fit for Sony's handheld, especially with the array of new level-building tools.

LittleBigPlanet Vita confounds your creativity before indulging it. The tools have grown to such a state of excess that figuring out what you want to build - rather than what you can build - stymies decision making. "The only limit is your imagination," the game's marketing materials brag. It's true, which is a tough pill to swallow when you're suffering from game-designer's-block.

That freedom is only paralytic for so long, though. Once you clear the hurdle of conceptualization, LittleBigPlanet Vita's Create mode is absorbing. Learning to execute your ideas while inventing new applications for old options is rewarding beyond compare - even if this isn't your first go-round with LittleBigPlanet's cushioned constructors. 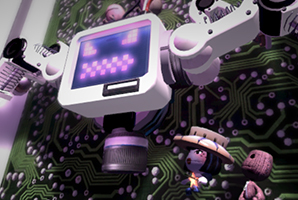 AS YOU MIGHT EXPECT, STORY MODE IS CHARMING AS ALL GET-OUT

Aside from the size of the screen, LittleBigPlanet Vita isn't smaller than its console counterparts. All of the level-making features of the core LittleBigPlanet titles are here, unlike the truncated LittleBigPlanet PSP. A suite of new tools are built on top of those features, which all utilize the Vita's touch screen, rear touch pad, and gyroscope.

None of those features are placed inside a walled garden - each can be used in Create mode with a language of tag-based interactions that will be instantly familiar for series veterans. All the tools, both old and new, are explained in an expedient series of tutorials, lessons, and gleeful observations by returning narrator Stephen Fry.

Story mode provides lessons in using the creation tools. It is, as you might expect, charming as all-get-out, telling the tale of a group of discarded marionettes who seek to end the reign of their corrupted puppeteer. It's also fairly brief - a three-hour tour, not counting the numerous replays you'll need to run to locate all the prize bubbles cleverly tucked away into each level.

"Acing" each level (by completing it without dying) is a particularly lofty goal inLittleBigPlanet Vita, as the increased complexity of the new control schemes heighten the level of difficulty. Levels walk the line of frustration and sometimes topple over it. The score-based challenge levels require near-impossible performances to earn all their allotted goodies, which is a drag.

Of course, the hours you'll spend on LittleBigPlanet Vita's core campaign will likely only represent a small fraction of the total time you'll invest. The real meat is in Create and Community modes.

Once the opening jitters have subsided, creation in LittleBigPlanet Vita is effortless. It's like jazz - even your more regimented blueprints will change on the fly as you learn new techniques and experiment with new tools. With just a layman's knowledge, it's easy to create something you can be proud of, or at least something amusing enough to entertain you for a few dozen hours.

The Vita hardware expedites nearly every step in the creation process, though it lacks a consistent precision, preventing actual time-saving. The tricks of the new system are best used in combination with the analog controls - moving the camera with the rear touchpad while drawing and moving objects became an invaluable maneuver during my longer build sessions.

The Vita's cameras allow you to easily stick pictures of your dumb mug all over your creations, or other people's creations, or on other players. It's a new, excitingly narcissistic form of trolling.

LittleBigPlanet Vita packs just as much visual and mechanical punch as its console counterparts, but it has suffered technically in the transition. The framerate tanks when there's too much stuff on the screen - like in previous LittleBigPlanet games, having a thousand score bubbles in your level is a recipe for disaster. But it also occasionally stutters for seemingly no reason at all, forcing you to remove objects from your level one by one until you find the offending item. Load times also suffer a bit, particularly when rewinding while editing. It only tacks on a few seconds each time, but considering that you'll rewind hundreds of times while putting a level together, it adds up.

LITTLEBIGPLANET VITA IS POLISHED, ADDICTIVE, AND PRECIOUS â A PERFECT FIT BETWEEN THE HANDHELD AND THE FRANCHISE

The occasional technical hiccups don't derail the madcap delight of playing and shaping LittleBigPlanet Vita. It's an experience tailored for handheld play: an engrossing, rewarding Create mode for longer trips and bite-sized Community levels for five-minute breaks. They can even be downloaded to your Vita for future play in Wi-Fi dead zones.