Aided by smart visual language and brilliant pacing, Mark of the Ninja quietly finds its target.

Mark of the Ninja never stops being a stealth game.

The third act does not feature the addition of heavy weapons, running and gunning, or a climactic boss battle in which the ninja ignores his dynastic teachings to chew gum and kick ass. As Mark of the Ninja progresses, more careful play is expected; the game, quieter; the sword, unimportant.

Developer Klei is best known for its Shank series, a duo of beat-'em-up games inspired by Tarantino, Rodriguez and Woo. The hero, sporting a bandanna dyed in blood, literally pounces into battle, liberally running a chainsaw up one enemy while sticking a grenade down another's gullet. On paper, Shank is Mark of the Ninja's opposite.

Yet Mark of the Ninja is a spiritual follow-up, more matured and measured than its predecessors. 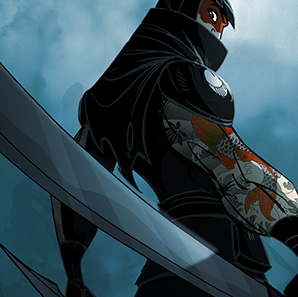 MARK OF THE NINJA'S VIOLENCE HAS RICHER CONTEXT

Shank and Mark of the Ninja have plenty in common. They share a quirky art style -characters drawn with thick black lines and filled with strong colors, like children's cartoons shocked by disembowelment and decapitation. Their stories deal with revenge, betrayal, and Machiavellian father figures. And though Shank and Ninja go about murder in different ways, the controls, in which every button is put to smart use, feel oddly similar. The word "sticky" comes to mind. Both Shank and Ninja zip from perch to enemy and back again, as if tugged by magnets.

Then there's the red band tattooed around the Ninja's head - a visual nod to Shank, as if the two are one and the same, separated by alternate universes.

Mark of the Ninja is also smarter than Shank. Its violence has richer context, with an overarching story of a possibly misguided ninja clan finding its place in a modern world filled with weapons and technology that could extinguish it. This large-scale narrative is the background to a more personal tale that teeters on the Ninja's loyalty to his brothers and his commitment to a suicidal fate.

A heavy finale cracks slightly under its dramatic heft. Side characters make rather blunt cases for their livelihood, and a binary climactic decision, while certainly something I mulled over, had no in-game ramifications. It felt a bit like reading a book with two optional final pages. Reader's choice.

The preceding chapters, however, are paced brilliantly. The first three quarters of the game are linear missions in which enemies, traps, and acrobatic feats are pitted against the player in increasingly difficult order. The game is teaching the player, one lesson at a time. You come in contact with an enemy, learn how to silently slay him, and later in the level have your memory and mettle tested by similar enemies in more complicated environments.

While these early levels carefully guide the player from beginning to end, they gradually open up. Each room of goons and boobytraps can be handled in a different way or skipped altogether if player uncovers the right path. Later chapters have smarter enemies, equipped with the heavy weapons and gear you'd expect to be rewards for the player. But the opposite happens. The player occasionally loses his weapon and gains more minimalist, mystical abilities.

Not that there aren't cool weapons to be bought. A hallucinogenic dart that causes guards to turn into homicidal maniacs before turning their weapon on themselves is a favorite. It's just that skills, abilities, and specialty items-which can be bought using in-game currency awarded by completing side-objectives-tend to be more defensive, used for hiding or causing distractions. Mark of the Ninja is a stealth game through and through. I can't help reiterating the point. Despite being a two-dimensional game with a colorful look, it finds a way to do everything its 3D contemporaries do and more. 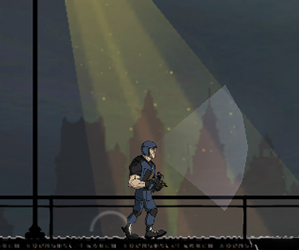 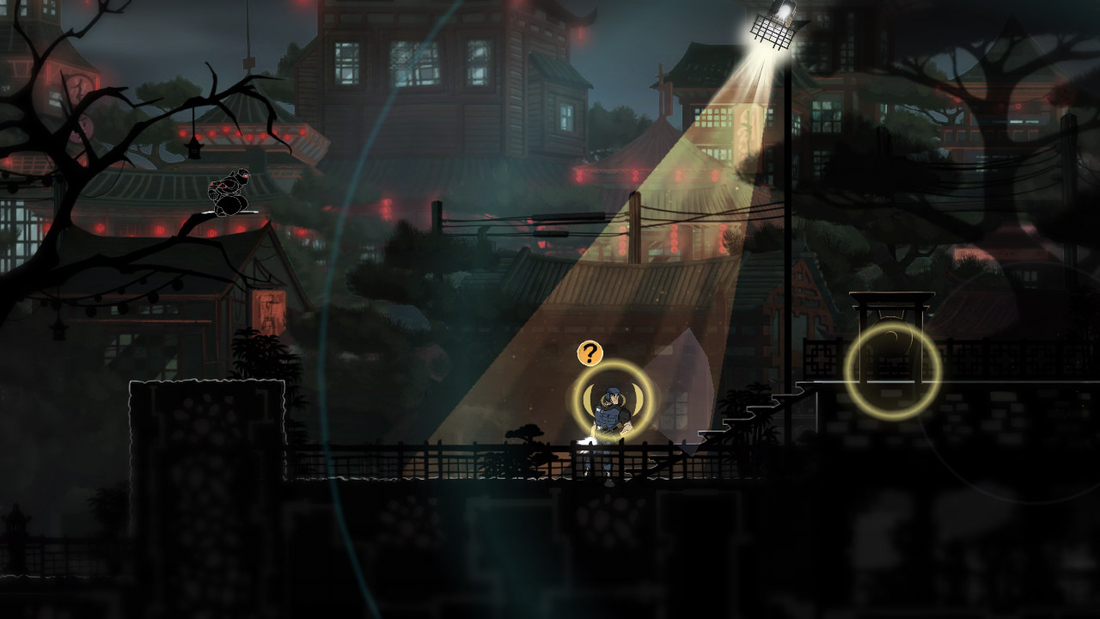 Because Mark of the Ninja does stealth so well, it feels fair. The player can sense what the computer senses. By that, I mean the computer's senses are visualized on the screen. Sound is represented by circles that ripple outwards from running feet or squawking birds, drawing attention to those in earshot. Eyesight and spotlights are visual cones. Characters are full-color cartoons in light, but in darkness they become silhouettes with thin white outlines. Curiosity and alertness are represented by punctuation above an enemy's head.

They're simple, familiar visual metaphors that tell the player how the world is reacting to their decisions. There are also nice, less obvious flourishes, like when a background lightning storm lights up the cityscape, giving away the Ninja's position.

It's top-notch design that puts the creative onus on the player: see something, learn its meaning, and smartly or not-so-smartly use that information how you sees fit to proceed safely.

The end of the game, roughly the final quarter or so, opens up its stages, allowing the player to take his own path. After hours of the computer lightly holding the player's hand, it lets go. The environment becomes a canvas for play. Everything has an alternative use. Traps become weapons when tripped intentionally. Bodies become keys to locked doors. Lights and gongs and dogs become distractions. Will he paint the world red in blood or manipulate it so that he needs not a drop?
FAMILIAR VISUAL METAPHORS TELL THE PLAYER HOW THE WORLD IS REACTING TO THEIR DECISIONS

Mark of Ninja is cohesive, a triumphant meeting of creative level design and well-executed controls. The story is memorable and rewarding. When the credits rolled, I wanted to go again, playing differently than the first time through. Mark of the Ninja feels like Klei's coming of age game, a more mature adventure that salvages the gore, guts, and grime that defined its previous work, and scraps the rest in a surgical maneuver â the work of game design ninjas.