NHL 13 reaches for the sports game holy grail: a title that teaches players through its mechanics rather than text pop-ups and tutorials.

NHL 13 is the smartest hockey game ever made, and it wants to make you a smarter hockey player.

Both on the ice and off, its revamped simulation systems - the physics-driven skating engine, player AI, and franchise trade logic - allow for a more realistic approximation of the NHL. They also make for a challenging game that naturally teaches you about hockey at every turn.

New players may find NHL 13 more difficult, and more difficult to get into, than ever before. Even long-term fans of the hockey franchise have a lot to learn here. But if you stick with it, you'll come to enjoy a deep experience that asks a lot of you as a player and rewards you with even more.

NHL 13's most significant overhaul is its new skating engine, which takes physics into account for the first time. Ice is an unforgiving surface, but previous entries in the series never quite sold the feel of skating. NHL 13 finally gets it right.

Momentum is paramount. The faster you're moving in NHL 13, the more difficult it is to turn. If you try to make a cut at top speed, you're now forced to make a wide turn, losing speed in the process. NHL 13 does a terrific job of providing visual and sensory feedback - chips of ice spray from your blades, and the controller vibrates - to let you know that you're testing the laws of physics. I've never felt more connected to my in-game skaters.

The new skating physics also deliver on the speed of the sport for the first time. Previous NHL titles lacked much differentiation between skaters - a defenseman skating backward could keep up with some of the NHL's fastest players. New animations help make faster players look and feel fast, changing the defensive game. 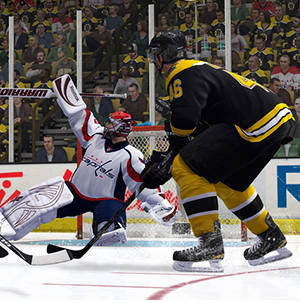 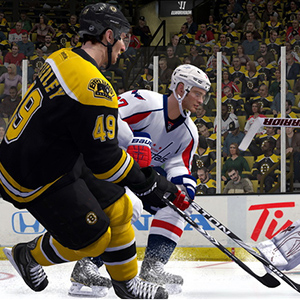 These changes force smarter positioning. Even a slight weight shift in the wrong direction can leave you out of position. I gave up more than a few penalty shots in NHL 13 because I tripped a player on a breakaway after he flew past me. The engine changes shifted the way I thought and played: Until I knew my players and my opponents, I was more conservative, making sure to get back on defense above all else.

The system made me think more like a hockey coach, pushing me to switch up tactics based on my opponents' strengths and weaknesses. Teammates each play their part in your overall strategies, defining the team's play style. The more you play, the more you learn about hockey tactics.

Goalies are much less susceptible to the cross-crease pass, and now that their limbs can move independently, you'll see unbelievable desperation saves. You can finally score in the five-hole, a realistic spot that was previously unavailable. And as far as I can tell, the smarter AI means that "money" goals are mostly gone.

That design intelligence permeates the rest of NHL 13. If your player in Be A Pro, the RPG-like single-player mode, is on the third line, he'll neither start the game nor get as much ice time as better skaters. Player ratings have a wider range, so the league's top-tier athletes are better differentiated from low-level scrubs. Hockey Ultimate Team, the card-collecting fantasy mode, now offers a "line assistant" option to automatically optimize your team's chemistry. These elements all teach NHL 13 players how real hockey works.

DESIGN INTELLIGENCE PERMEATES ALL OF NHL 13.

Hockey Ultimate Team is smartly integrated with the new NHL Moments Live mode. You're presented with a scenario that either asks you to recreate or rewrite NHL history, sometimes as one player and other times as a team. Completing challenges earns you EA Pucks, which can be spent on Hockey Ultimate Team card packs.

Playing through these salient moments from last season and beyond - Henrik Lundqvist's brilliant 1-0 shutout in the 2012 Eastern Conference Quarterfinals, Wayne Gretzky's still-unequaled mark of 50 goals in 39 games - strengthens the connection between NHL 13 players and the real NHL. I just wish the older scenarios involving legends like Gretzky and Mario Lemieux featured their contemporaries, instead of players from today's NHL - but maybe I've been spoiled byNBA 2K12's "NBA's Greatest" mode.

NHL 13 also improves the AI in Be A GM, the franchise mode. I found it difficult to make even a slightly lopsided trade, let alone fleece a team. Other GMs employ shrewd roster management and offer specific explanations when they decline a deal.

GM Connected takes Be A GM online, bringing together up to 25 human players for each of the NHL's 30 teams. With the scheduling nightmare of 750 potential players, it's a good thing that GM Connected's flexibility allows you to move forward by playing the computer.

Molasses-slow navigation renders much of GM Connected's promise moot. Even scrolling through a list takes too long, and almost every time you back out of a screen, GM Connected chews on the decision for a few seconds, calculating...something while a loading animation circles. I'm hoping the frustrating delays were just a function of pre-release servers, but if not, it's a notable issue.

NHL 13 manages a rare feat, the holy grail of game design: organic teaching through game mechanics and systems, rather than text pop-ups or distinct tutorial modes (although it has those, too, for novice players). The new skating physics and player AI don't just deliver a more accurate simulation of hockey; they elegantly convey the complex interactions â blade on ice, right winger versus defenseman â that are at the heart of the sport.

I went skating for the first time earlier this summer, and hopelessly flailing around on the ice gave me a tremendous respect for the remarkable skill set required to play hockey professionally. By giving me a better understanding of the sport's nuances, NHL 13 only furthers that appreciation.