Insomniac Games reveals the fate of Overstrike, the cooperative shooter born again as Fuse. Here's what's changed (and why).

Teased at this year's PAX Prime, Fuse is a four-player, class-based, cooperative shooter that's been sharpened to give it a more serious edge since we saw it last. It is Insomniac's big bet, a new intellectual property coming early next year to consoles.

After more than a year of radio silence from Insomniac, the studio behind Ratchet & Clank and Resistance, the developer is finally willing to talk, revealing a comprehensive makeover of the game formerly known as Overstrike. Since its unveiling at last year's E3, the game has transformed into a title that builds its near-future fiction not around the special ops agents of the Overstrike organization, but around an alien element codenamed Fuse.

Fuse, the substance, is secret alien tech discovered by the United States government in the 1940s. It has since been tested, controlled, and weaponized, its existence kept secret from the public. Fuse is the xenotechnology that powers the game's incredible, impossible weapons, the kind of multipurpose gadget-guns Insomniac Games is known for creating. According to studio co-founder and president Ted Price, Fuse is also a double entendre - Insomniac's other specialty.

"It's what happens with the team as they continue to work together and resolve a lot of the differences [the Overstrike team] have personally," Price says.

Here's the set up that kicks off the events of Fuse: When a rogue private military contractor named Raven steals the source of Fuse, the Overstrike team is called in to clean up the mess and recover the goods. While investigating a secret underground government installation, the scene of the crime, they discover four powerful weapons built with Fuse's volatile power.

Price says that sci-fi substance is also at the root of the developer's decision to move away from the Overstrike identity. "As we started playing around with this element more, it became evident that this was really about something much bigger than this team of mercenaries," Price says.

"LIKE ALL OF OUR GAMES, WE PLACE AN EMPHASIS ON GREAT CHARACTERS AND DEEP STORIES."

As the Overstrike team tracks the stolen Fuse - hoping to prevent a global Armageddon - they'll travel around the world, starting at secret government base in the Nevada desert, then heading to Jodhpur, India, a Raven stronghold in the Alps, and exotic locales still unrevealed.

Throughout the course of the game, the Overstrike team will see their skills and the power of their respective Fuse weapons grow. We'll learn more about the four members of the Overstrike 9 team, through a campaign that reveals their individual personalities and histories.

Insomniac says it's approaching Fuse's story in a new way, through story dialogue delivered throughout gameplay and minimal cutscenes rendered in real time on the studio's new proprietary engine. 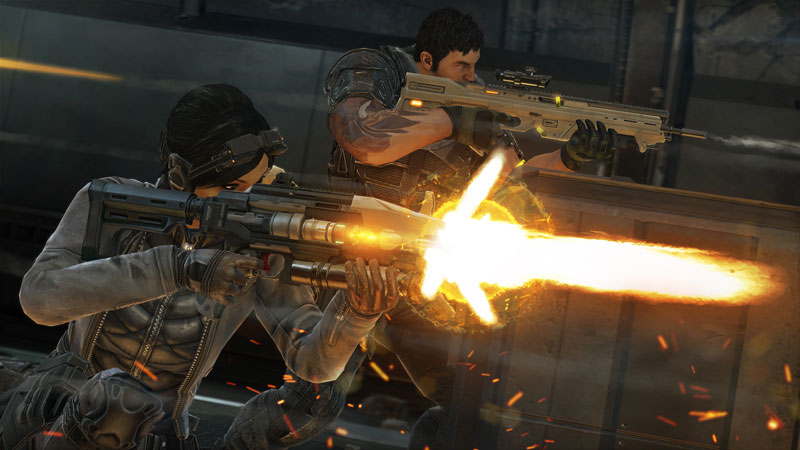 Leading the Overstrike 9 team is Dalton Brooks, the grizzled core of Fuse and the "tank" of the squad. He's also a former Raven agent, a fact sure to lead to some sticky situations in Fuse's campaign. Dalton wields the Magshield, a deadly force field weapon birthed of the combination of Fuse and ferrofluid, a malleable liquid made of iron particles that can be formed into shapes with magnetic waves. That recipe powers an impenetrable shield that blocks enemy gunfire.

Dalton's Magshield protects him and his teammates. He can deploy portable copies of those force fields on the battlefield to provide improvised cover. Magshield charges can also be fired in a massive blast that rips through enemies, making Dalton more than just a defensive character.

Naya Deveraux fills the Overstrike team's area of effect role. Her Warp Rifle, powered by the volatile combination of Fuse and anti-matter, coats targets with a mixture that triggers miniature singularities, tearing enemies apart. Coat multiple enemies standing close together and the singularities will chain together, doing damage to a wider area. 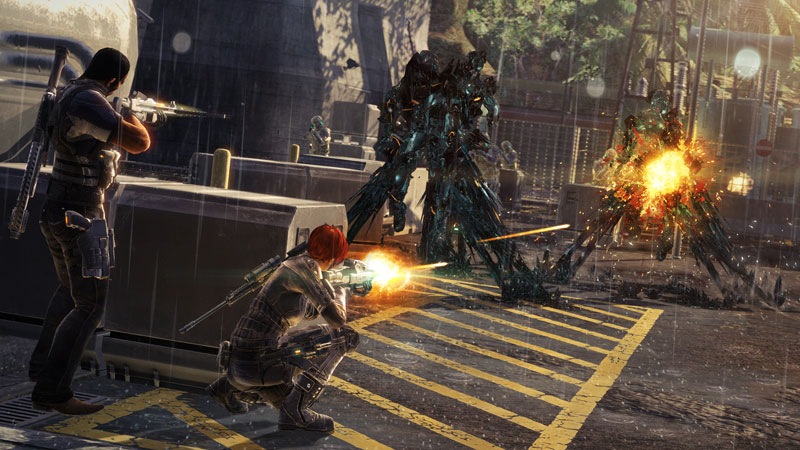 Isabelle "Izzy" Sinclair wields a Fuse-powered weapon called the Shattergun. It combines Fuse with the mineral properties of melanite to crystallize targets, immobilizing, crushing, and piercing enemies. Shattergun shots will rip enemies out from behind cover, exposing them to your teammates.

Jacob Kimble, a former LAPD detective, rounds out the Overstrike 9 team. He's the sniper of the group, utilizing a weapon called the Arc Shot. The crossbow-like weapon fires shots of liquid mercury mixed with Fuse, superheated bolts that do grisly burn damage.

The Arc Shot is ideal for taking out heavily armored enemies. Targets hiding behind riot shields or turrets are vulnerable to Jacob's attacks, as Arc Shot rounds can be fired behind targets, then triggered to explode, lighting enemies on fire from behind.

Each of those weapons and all four of Fuse's special operatives have their own progression system, abilities that can be upgraded through a "pretty complex skill tree," Price says. Players will accrue Fuse Points as they play, through kills and assists, which can then be spent on new skills.

In addition to the four core Fuse weapons, Insomniac is building an arsenal of guns: shotguns, pistols, rifles, rocket launchers, and more. The more conventional weapons are meant to complement the Overstrike team's xenotech guns, and through a dedicated branch of the game's skill tree, players can upgrade the performance of those firearms. 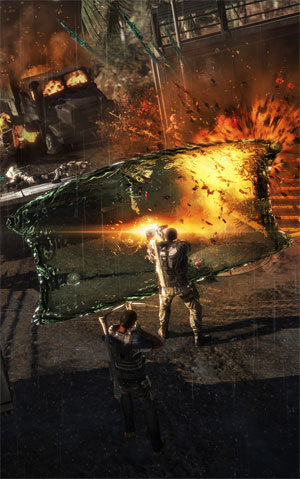 "WE LOVE CRAZY WEAPONS AT INSOMNIAC. WE CAN DO CRAZY CRAP TO ENEMIES."

Price says the weapons of Fuse are designed to encourage players to cooperate without "forcing it." To illustrate this, he showed select portions of cooperative gameplay, with Dalton shielding the group and Jacob sniping through his teammate's force field. Jacob scored the kill points, with Dalton racking up assist points. In another scenario, Izzy crystallized a group of foes with her Shattergun, followed by Dalton shield blasting them. A "shatter bonus" went to Dalton, an assist bonus to Izzy.

Insomniac promises big bosses that will require players to communicate, to combine their Overstrike team's talents to take them down.

Players will also be encouraged to cooperate by taking advantage of the game's "Fusion Mode," a team power-up that unleashes the full power of the each member's Fuse weapons. After building up a meter, players can kick into Fusion Mode, sending the entire team's weapons into overdrive. Weapons will fire faster, inflict greater damage, and exhibit powerful new behaviors. As a bonus side effect, engaging Fusion Mode heals the entire team, particularly useful when your teammates are on the verge of death. 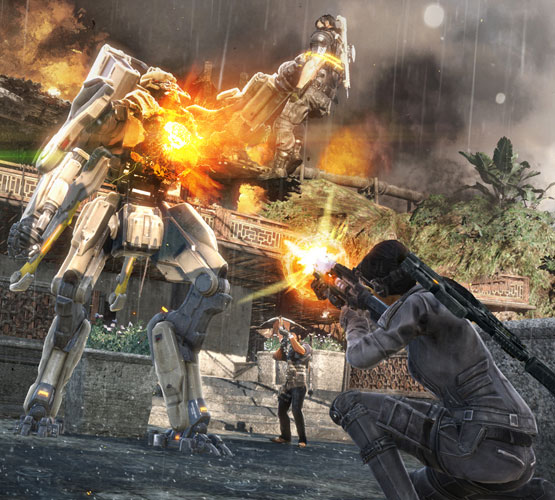 What, then, for the player who prefers to play this four-player co-op game solo? Fuse's "Leap" system is Insomniac's answer.

Leap allows players to bounce back and forth between the four playable characters, giving them immediate control of their AI-controlled allies with a simple button press.

"Most people when they play cooperative games will play the campaign first," Allgeier said. "Or they'll play at least the first three or four levels before they want to venture into playing it cooperatively.

"That's something that we didn't want to ignore and that's one big reason why we came up with the Leap feature. Here we've got this great team of characters and if we just make you stick with one, you're never going to get that experience of playing as a team and using all these fun strategies."

What ever happened to Overstrike?

"AS WE DISCOVERED FUSE AND STARTED DEVELOPING THAT MORE AND MORE, IT JUST CHANGED THE GAME..." 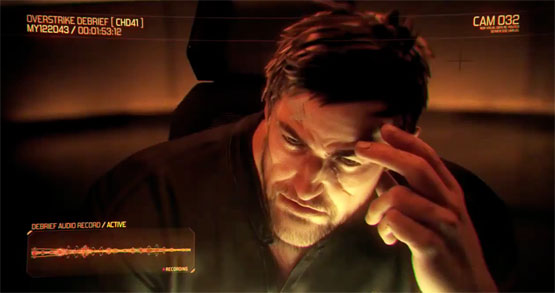 As the game developed, Insomniac says the lighthearted visual tone of Overstrike didn't match what it was ultimately becoming: a mature, co-op shooter with a more serious story centered around the Fuse element.

"We'd started off with a cartoony art style, but it just never felt like the stakes were that high," says Fuse creative director Brian Allgeier. "You really couldn't take anyone seriously. We actually evolved the style quite a bit just to get to the Overstrike trailer from E3 2011. We were still developing the characters, but there was a certain point where we were ready to go to press and get these characters in the trailer. And they were kind of pulling it out of our artists' hands."

"SOMETIMES YOU HAVE TO MAKE HARD CHOICES."

Fuse, even before we knew it as Overstrike, began life as something different altogether: a four-player stealth game.

"That didn't work," says Price of the game's original intent. "We were struggling to find the fun there. [Brian Allgeier] was the one who came to me and said, 'I don't think this is working at all. We need to take this in a more action-oriented direction.' It made a lot of sense, because that's what we do best."

"There's always going to be a Leeroy Jenkins that runs in and screws things up," Allgeier says of the original co-op stealth design. "We realized we really needed to make this about these dual functional weapons - they were called gadgets at the time - but we finally locked down on what seemed to be an offensive, four-player game that's class-based. That was a big step for us about six months into the project." 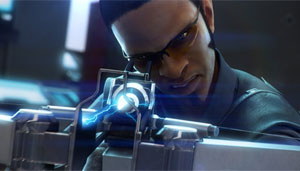 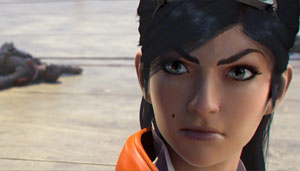 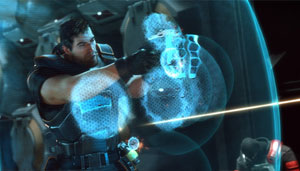 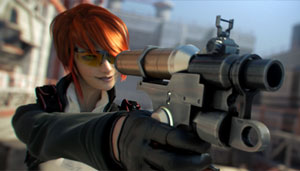 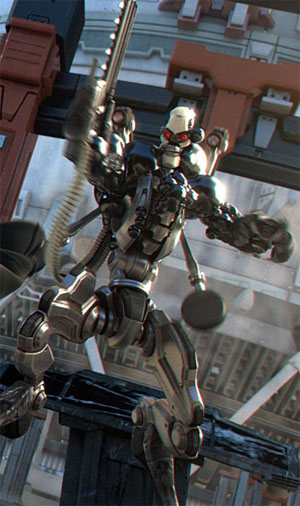 That's when Insomniac began prototyping Fuse's signature weapons, some of which made their way into the E3 trailer, some of which have since evolved. Price says that, constrained by Overstrike's stylized art direction, the developer was having trouble giving the game's weapons "the impact that we believed they needed to make combat feel satisfying."

"When we went in a darker direction, a less comic direction, we were able to do a lot more over-the-top experimentation with the weapons," he says. "We were able to make them look more brutal and do things to enemies that we simply couldn't do with our previous incarnation of the game. It wasn't until we started trying these things that we realized that's where the core fun, in terms of the minute-to-minute combat, lay."

Price says reaction to the change, even within Insomniac, was somewhat mixed.

"A large percentage [of the team] was relieved that we were embracing a more mature existence because it was more relevant to the gamers we were targeting," he says. "But there are some folks who loved the original campy direction. You can never please everybody. You have to do what you think is best for the game."

Fuse will retain a degree of its original humor, Price promises. He says the campy humor shown in last year's trailer has been replaced with a "more sophisticated, dry wit." T.J. Fixman, writer of Insomniac's Ratchet & Clank series, will provide that humor, a component missing from the developer's drearily serious Resistance games.

"WE HAVE GONE THROUGH AN EVOLUTION. THIS IS A BETTER DIRECTION FOR THIS GAME."Insomniac promises there's more to come, including details on Fuse's other unannounced mode and additional information about the game's largely unrevealed plot and characters.

While the overhaul and re-reveal of Fuse has been a long time coming, the game will be released relatively soon. Insomniac and publisher EA are planning on shipping Fusefor the PlayStation 3 and Xbox 360 - making it the developer's first multi-platform game - in March.