Five new maps that "experiment with the boundaries" of Call of Duty's multiplayer battlegrounds, an all-new weapon and a new Zombies gameplay mode will come to Black Ops 2 starting next week on Jan. 29. During a recent visit to developer Treyarch, we had the chance to go hands-on with all the content coming to Revolution, Call of Duty: Black Ops 2's first map pack.

The add-on's new weapon, dubbed the Peacekeeper, may be the most interesting downloadable addition to Black Ops 2. This is the first time Treyarch has added to the game's arsenal with a DLC weapon and the developer says it wants to make the Peacekeeper "the most popular weapon it can be."

Treyarch calls the Peacekeeper a "hybrid" weapon that offers players the "movement speed of an SMG and the range of an assault rifle." Modeled around the concept of a futuristic UN peacekeeper rifle, the fictional gun stands out visually with its slick, painted white style.

While the introduction of a new gun into Black Ops 2, which comes with its own weapon challenges, is an interesting change for Treyarch, it's the four new multiplayer maps that are the real draw in Revolution.

Grind is Revolution's skate park-themed map, and the one that Treyarch staffers, including online director Dan Bunting, seemed most enthusiastic to talk about during our visit. Set in a bright, colorful southern California skate park, Grind is bounded and divided by plenty of curved walls. Half pipes, ramps and curved, tubular tunnels experiment with the traditional architecture of a Call of Duty multiplayer map, forcing players to stay on the move, as they can't hug most of Grind's walls for cover.

Where other Revolution maps adhere a bit more closely to the context of Black Ops 2's near future sci-fi setting, Grind is where Treyarch's level designers appear to be cutting loose. The extreme sports vibe of Grind doesn't quite square with the extreme violence going down, but it's clear the map makers are having fun. Grind feels more like a playground where a vicious gun battle has broken out compared to Revolution's other maps more grounded in reality.

My personal favorite of the four competitive multiplayer maps was Mirage, the arena set in the Gobi desert. Rising sand dunes and burned out cars provide cover opportunities in the outside portion of Mirage, with a handful of hot spots where opposing players frequently meet. Mirage's interior, a disorienting series of tunnels and hallways, adds a sense of tension in time sensitive gameplay modes like Demolition and Hardpoint.

The map that may have the most potential for popularity is Hydro, a fast-paced map set in a hydroelectric power facility. A heavily trafficked channel running through the center of the map will occasionally fill with water, washing away any players unlucky enough to find themselves there and cutting off a major route.

Hydro's multi-level structure and smaller size makes it an exciting map on which to play some Capture the Flag quickly.

Finally, Downhill adds a snow-themed option to Black Ops 2 multiplayer. Set in the French Alps, Downhill seems to offer the most terrain variety of Revolution's set of maps with an intersection at its center where players will frequently run into each other. A pair of gondolas travels through the center of the map, introducing a major hazard in a frequently populated chokepoint.

With Revolution, Treyarch is adding another competitive multiplayer map set in its Zombies universe, the vicious game of tag known as Turned. 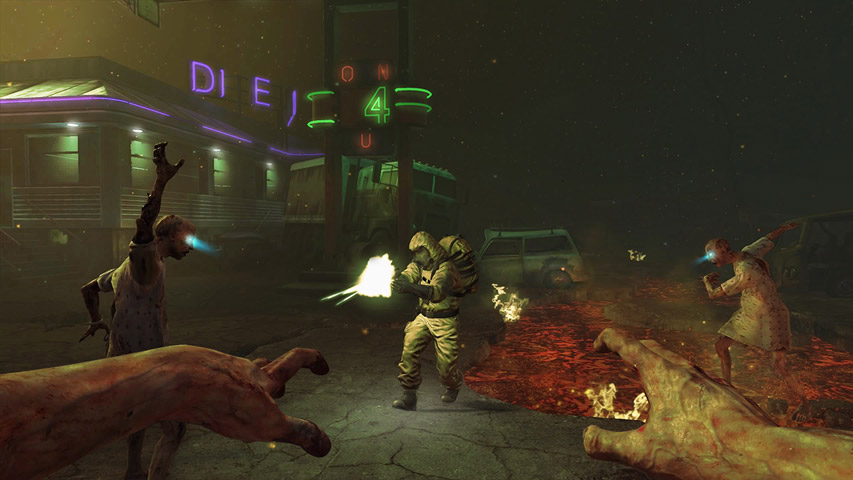 In Turned, players will fight for control of a human survivor. All players start as zombies and must race to find "the cure." Whoever acquires that item first will be respawned as a human. The rest of the players must hunt the human player down and attack. Kill the human, become the human, then try to stay alive as long as possible.

As zombies, players have little at their disposal. Zombie players can claw at the human with the triggers or sprint frantically by pressing in the right analog stick; no jumping, no projectile attacks.

In the games of Turned we played, all were set to "Reverse Gun Game" mode. That means when a player becomes the human, they'll start with a handgun. If they manage to kill a zombie opponent, they'll upgrade to a shotgun, then to a submachine gun, and so on. While weapon upgrades are welcome in Turned, the second-long transition from one gun to the next puts the human player at a disadvantage. Zombie players move fast, respawn instantly and can swarm a player in no time.

Single-weapon modes are available in addition to Reverse Gun Game mode in Zombies Turned, but were locked down during our demo.

Zombies Turned mode can be a great deal of nerve-wracking fun in short bursts, aimed at the player who may want a multiplayer zombie thrill without committing to traditional Zombies modes.

Fans of Call of Duty's Zombies mode will also get access to Die Rise, a new map for the cooperative multiplayer mode. Die Rise brings verticality to Zombies mode, starting players at the top floor of a destroyed high rise building in China. Players must work together to climb down the building, avoiding hordes of undead along the way.

What makes Die Rise so fascinating is its disorienting architecture. The map is dark and mazelike, with multiple pathways, including some risky, deadly jumps that players can attempt to speed their descent. For the more careful player, other avenues — escalators, rickety elevators — can be accessed through teamwork and purchases. Given the multiple routes, its easy to get lost and quickly separated from the group.

Based on our hands-on time with Revolution, there's something for every player who still loves what Call of Duty: Black Ops 2 has to offer. The multiplayer maps are top tier, the Peacekeeper is a nicely balanced addition and two very different Zombies game types add even more variety to the online experience.

Revolution is the first of four map packs Treyarch has planned for Black Ops 2 in 2013. All four are included in the game's $49.99 Season Pass subscription. Non-subscribers will be able to pay $14.99 (1200 Microsoft Points) for Revolution when Activision makes it available to them; no release dates for other platforms are available yet.