LittleBigPlanet Karting's redemption comes in the form of user-generated content

LittleBigPlanet Karting makes the tricky enterprise of evaluating a game based around user-generated content even trickier, for the sole reason that its on-disc content isn't very good.

The do-it-yourself nature of the LittleBigPlanet franchise has always been able to be used in a right way and a wrong way. LittleBigPlanet Karting is no different — when used correctly, the deep track-making toolset lends itself to a fun and rewarding kart racing experience. The community has discovered good methods, and has already put them to work to create hundreds of memorable, enjoyable tracks.

When those tools are used incorrectly, LittleBigPlanet Karting becomes an exercise in frustration; and boy, did United Front Games use them incorrectly. The levels that compose LittleBigPlanet Karting's story mode are so unenjoyable, you'll spend less time driving than you'll spend trying to figure out how the developer used its own tools to such poor effect. It's like if the Wright brothers invented the airplane, and then were forced to ask, "Hey, does anyone know how to fly one of these things?" 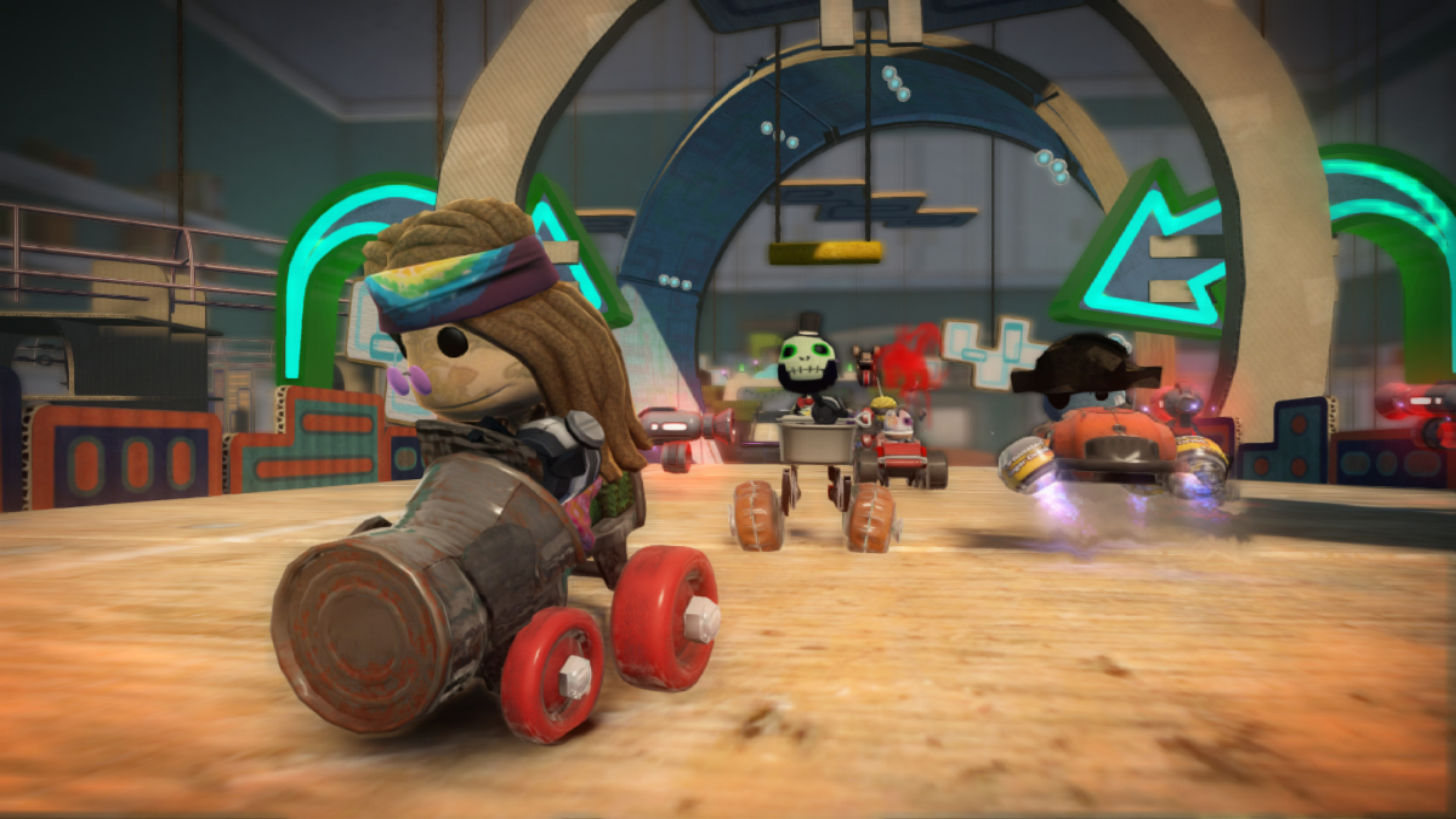 When it is allowed to be, LittleBigPlanet Karting is actually a pretty competent racer. It has the components you'd expect: tons of drifting, speed boosts (powered by the aforementioned drifting), not-so-random weapon drops which become more potent as you fall back from first place, and so on. There are environmental oddities to mix up the action a bit — the most exotic of which being humongous jumps and pre-determined grappling hook swings — but for the most part, becoming competent with the mechanics won't take too long.

The combat mechanics of ModNation Racers (United Front's last, UGC-driven racer) have been streamlined somewhat in LittleBigPlanet Karting. Weapons no longer charge through several ranks of increasing potency, and defending against attacks no longer depletes your energy reserves. Both functions are now one and the same: You can either use the weapon you've just picked up to attack, or defend.

That's a significant simplification from ModNation, but it's a welcome one. As frustrating as it is to get hit by a rocket when you don't have an item with which to defend yourself, it makes it much easier to drive when you don't have to manage several independent energy reserves simultaneously.

Unfortunately, that is the only decision United Front made in the interest of making driving "easier."

frustration is exponentially intensified by some truly awful rubber-banding

Most of the racetracks in LittleBigPlanet Karting's story mode are nightmarish obstacle courses devoid of straightaways or safe corners, where weapon pickups are scattered ever few feet. Death comes constantly on these tracks, either from the deadly traps you're expected to navigate at 100 miles per hour, or from the three rockets your nearest competitors just collected and deployed inside of you.

The frequent combat-only arena levels don't suffer because of these issues, but that doesn't make the racing levels any less frustrating. That frustration is exponentially intensified by some truly awful rubber-banding — I can't begin to count the number of times I fell from first to last place with a single death.

LittleBigPlanet Karting's redemption comes in the form of user-generated content 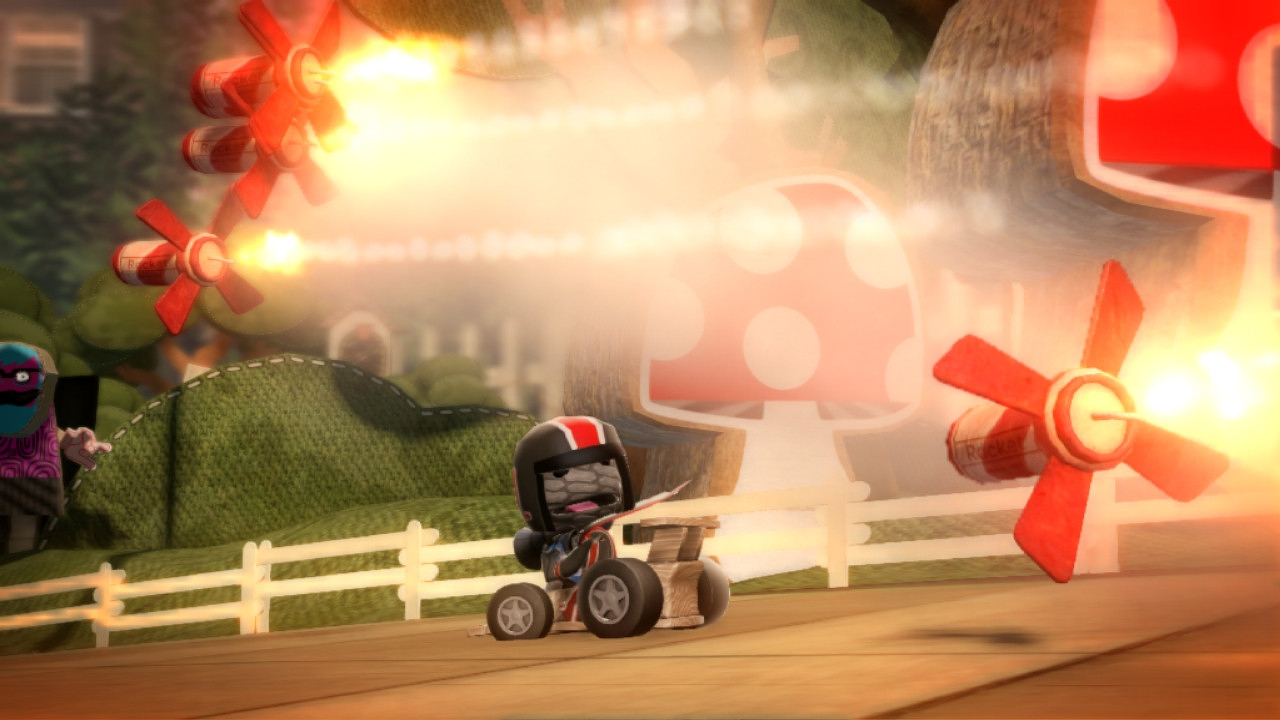 The highlight — and LittleBigPlanet Karting's redemption — comes in the place you'd expect from the franchise: From the community and level creation features.

The toolset is slightly more limited than the core series, but is far more accessible than the triple-layer planes and logic switches of its platforming counterpart. Within minutes of steering and directing a track-placing paint roller, you've got a fully functional course. A few more minutes, and you've got the necessary mechanics in place — jump pads, weapon drops, and the like. Then, all you've got to do is gussy things up, and you're good to go.

With these tools, the community is able to make up for the mistakes of the main campaign. The highest rated and most popular user-made tracks blow the on-disc tracks completely out of the water. They're not necessarily stuffed with spikes and deadly electrified pits and overabundant weapon drops. Some of them are just fun, simple race tracks (and some are perfect recreations of Mario Kart tracks).

There's also the variety of tracks which use the game's track-making tools to make pachinko machines, or other things that aren't race tracks. Those kinds of genre-bending accomplishments were commonplace in LittleBigPlanet, also, but are no less admirable here.

United Front's game comes up short, but their level-creation tools provide something more

LittleBigPlanet Karting includes a toolset which players can use to build visually and mechanically imaginative creations; which I suppose is the most important thing to nail when creating a LittleBigPlanet game. United Front has done that swimmingly, actually producing tools that are more inviting than those of the LittleBigPlanet platformers. It's just puzzling that, when it came time to utilize those tools, the developer came up short.