Hundreds, released today for iOS, began life as a simple creation, the product of an artist flirting with game programming. The puzzle game, its creator says, was originally conceived while staring at a ceiling.

"I wanted to make an entire game by myself," Hundreds creator Greg Wohlwend tells Polygon. "I really like simple and elegant game design. I think it's the predominant thing in all of my visual designs."

The game, originally described as a game about patience and persistence, has a simple core concept: Tap circles to grow them, but don't let them collide as they expand.

"I was staring at my ceiling one night," Wohlwend says, contemplating game design after the release of Solipskier, a game he co-created with programmer Mike Boxleiter. "I imagined growing a circle as large as possible without having them touch whilst growing. The victory/death case was so intrinsically linked I could play it in my head and feel how much patience it would take in certain cases."

Wohlwend first released Hundreds in 2010. The Flash version is available to play on Newgrounds, where Wohlwend writes self-deprecatingly about his game, "It's not super expansive or anything but I'm pretty happy with the fine-tuned balance of the whole thing."

The Flash version of Hundreds didn't make him any money, Wohlwend says, so he made the game open source, hoping that other "non-coders" would be encouraged "to see how someone dumb like me programs a game."

"It was all in one file and I pressed submit with a red face," Wohlwend recalls. The open source release attracted the attention of a more experienced programmer, Eric Johnson of SemiSecret Software, maker of Canabalt, Wurdle and more. Johnson ported Hundreds in its original incarnation to the iPad in a weekend, then sent his build to Wohlwend.

"Playing it on the iPad was a really different experience that gave me all of these ideas right away for multi-touch and co-op play style that we could utilize," Wohlwend says. "We all got excited dreaming about how Hundreds could be elaborated on with a touch device and some serious attention."

"In a design like this there's nothing to blame but yourself for risking too much. I really like that kind of strict discipline in game design."

SemiSecret's Adam Saltsman and Wohlwend began elaborating on Hundreds' mechanics, growing the game with new types of circles and new puzzle layout. But the evolution of Hundreds was not as elegant as its original creation, with its creators initially stumbling to flesh out the game.

"It had this really simple premise but also a ton of obvious (though ultimately pretty tricky) potential," Saltsman says. "This is a somewhat self-aggrandizing example but I think the reaction a lot of people have to Canabalt, like 'Whoa this is great, but what if you had guns/karate kicks/helicopters/etc??' was sort of the reaction I had to Hundreds. I thought the basic building blocks were so cool, but that we could really push the design too if we wanted.

"The goal was to build a game that kind of fully explored the idea of circles bouncing and growing in a confined space," Saltsman explains. "In retrospect though I think we really started going in the wrong direction after a few months, and it took a few more months to realize my mistakes and kind of get steered back on track, and really find the sort of core or heart of the extensions we were making to the design." 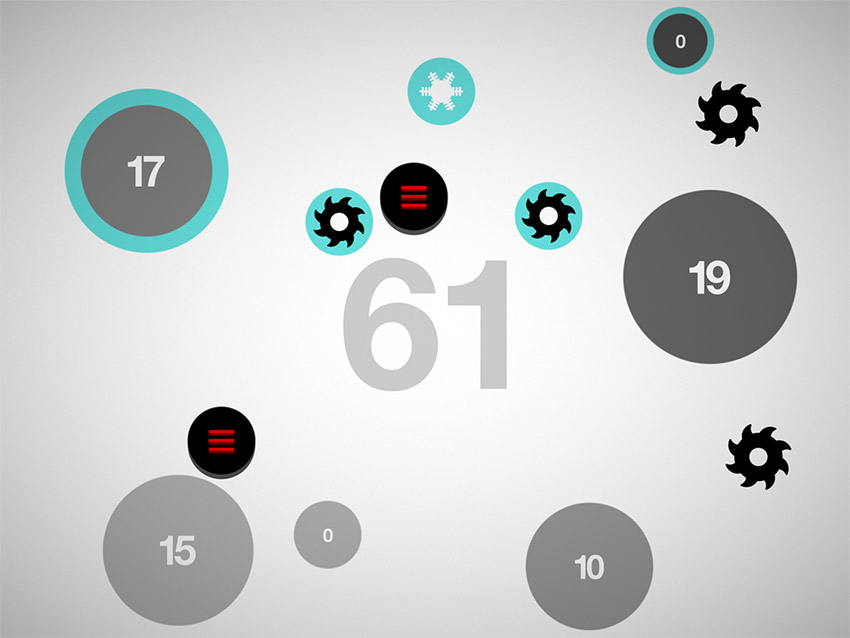 Wohlwend says he originally envisioned making Hundreds' iOS port less difficult. On Newgrounds, he writes he could only reach level 25 in his own game.

"I started out with a list of about 10 possible circle types that were designed to make the game easier," Wohlwend recalls. "That turned out to be wrongheaded but restricting design to these modular 'circle types' definitely held the simplicity that makes Hundreds unique in tact. I'm really happy that we were able to have both a simple game that also has an incredible amount of emergent interaction and all of that is to Adam's credit."

As the game mechanics grew so did other aspects of Hundreds, including the addition of a surprising new element: A narrative element that Saltsman and Wohlwend are hesitant to discuss in detail.

"The narrative layer was not part of our initial plan," Saltsman says. "I fairly clearly remember a series of fairly spontaneous emails between Greg and I, just going 'Hey man do you want to do something really obtuse and weird (but also optional) as a sort of side quest in this game?'"

"Suffice it to say it's odd, but also very much designed and deliberate at this point. That is to say, it's definitely not cutscenes or motion comics."

"I think once people start playing it, they can talk about it however they wish," Wohlwend says. "That's the one hope, that people will talk about it with each other and provide the game a bit of context."

"Usually the mystery beats what's inside the box"

Hundreds is available now for the iPhone, iPad and iPod touch at an introductory price of $2.99 from the iTunes App Store.