Puzzle Retreat is a lot like the studio that made it. Out today on iOS, the zen-like puzzle game is small and simple while also deep and complex. It's minimal in its design and effortless in its appearance but has more than a year of work behind it. It's undergone numerous transformations and is unrecognizable from its early prototypes. Sure, it looks easy, it looks effortless, but as its developers will say, it takes a lot of work to make anything look easy.

The Voxel Agents is an Australian studio that makes what it does look deceptively easy. To most people who have heard of the studio, it's the team behind the highly successful Train Conductor series for iOS. It's the studio that sprang onto the Australian game development scene, fully-formed, with a spacious office, vast resources and a chart-topping iPhone game it prepared earlier.

Its developers make it look easy, but it wasn't easy. Like Puzzle Retreat, the studio we see today is the result of years of sweaty and cash-strapped effort, and the road to its success all began with a game that made no money. 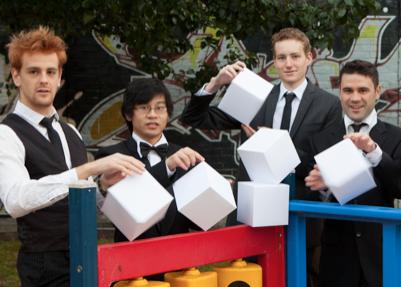 Simon Joslin, Matt Clark and Tom Killen graduated from university in 2006, a year before what we now know as the Global Financial Crisis hit the world and two years before the Australian games industry would feel its devastating effects. The three friends went their separate ways to work at local studios, with Joslin scoring a gig at Halfbrick (several years before it would go on to make Fruit Ninja and Jetpack Joyride) and Clark joining the now-defunct Pandemic Studios in Brisbane.

"We always talked about starting a studio but never took it too seriously," Joslin says. "But we always talked about it and thought it'd be great. At the time the Australian industry didn't really have that many exciting places to work. Everyone was doing contract work, but we all graduated and went off and worked for different places to get experience."

Halfbrick and Pandemic were good places for them to learn, but the three couldn't help but return to the idea of starting something of their own. All three could program, all three had ideas, and they worked well together. The first year they entered a 48-hour game-making competition as a team, they won. The second year they entered, they won again. It seemed stupid for them to not start their own studio. But they all had stable jobs and security — it seemed stupid to give that up.

By the time the full effects of the GFC were felt by the Australian games industry, no one really knew what was stupid anymore. Pandemic, one of the many casualties of the GFC, closed, leaving Clark without a job. Joslin had recently left Halfbrick to move to the unofficial game development capital of Australia, Melbourne. If Killen was willing to make the move as well, perhaps now was their chance. By 2009 most major Australian game studios had either closed or were on shaky ground. The three had little to lose. They moved to Melbourne to form their own studio. If this was a stupid move, they were about to find out. 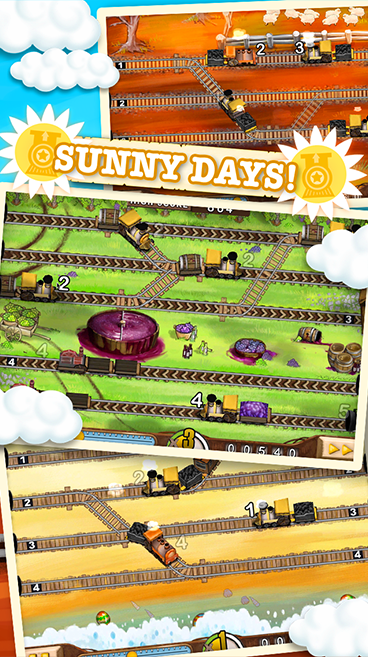 In an idealized version of events, Joslin, Clark and Killen moved to Melbourne and had an instant hit on their hands. In reality, they had no source of income and were on welfare support for almost a year. They signed up for a government program that supports the unemployed who are looking to start their own business. They were very serious about starting their own business. From the word go they decided that they should work together in the same space for at least 40 hours a week, every week.

The three pooled $4,000 each to pay for office space and equipment. The office was meant for only one person but they managed to cram in three. Part of their work space was in the fire escape. Another part was in the hallway leading to the toilets. Joslin admits that while they were filling in business plans as part of the government's support program and predicting that they would make $1 million in the first two years, they weren't really sure what they were doing.

Another Melbourne-based studio, Firemint (which has since merged with EA's Iron Monkey to become Firemonkeys) had just released Flight Control and experienced enormous success with it. It'd described Flight Control as an experiment. Seeing Firemint's success on the iTunes App Store which was, at this time, only eight months old, Joslin, Clark and Killen decided they would try experimenting too. That experiment was Dolphin Hero.

"We made Dolphin Hero in six weeks. It was a quick kind of experiment for us," Joslin says. "It was a bit of a throwaway but we did put effort into it and we did genuinely hope that maybe it would take off."

As determined as the team was to make Dolphin Hero work, their lack of planning meant Dolphin Hero wasn't going to be the success they were after.

"I think Dolphin Hero sold 300 copies at a dollar, and that was to 280 of our friends," Joslins says. The Voxel Agents didn't even see any money for the game because Apple requires that a game earn more than $200 in a single currency. Dolphin Hero sold 300 copies worldwide, which meant not a single currency made it over the $200 threshold. "It was so sad."

Fast running out of money, the team decided to try something different. Instead of blindly developing a game they'd put little thought into it, they would brainstorm and prototype 10 games. They came up with a list. Each developer would prototype one game every two days until they had 10. From the 10, they would choose their favorite and work on it together. By the time they'd gotten to their sixth prototype, Joslin says they didn't bother with the last four because their next game was right there in front of them: Train Conductor.

"It was just obviously better than the rest," Joslin says. "There was no doubt — it was really fun straight away."

It was also the product of a lot more thought.

"We realized you can't just make a game and make money. It's just not going to happen. You have to spend a bit more time thinking about who's going to play your game and why it's going to be good and what's fun about it."

Development on Train Conductor began in June 2009. Six months later, on the day the game released, The Voxel Agent's initial $12,000 investment had dwindled to $200. Conveniently, the person from whom they were subletting their office was kicked out by the landlord, which meant The Voxel Agents were also kicked out. Broke and officeless, everything was riding on their little game about controlling trains.

Train Conductor made $100 in its first day of sale. It made $200 in its second. By the end of the first week it had made $1,000, and after being featured by Apple it made $35,000 in its first four months on the iTunes App Store. To date, Train Conductor and its sequel Train Conductor 2 have made approximately $750,000. The studio crossed a bunch of currency thresholds and the sadness of not receiving any checks for Dolphin Hero was quickly replaced with excitement.

The team was now able to afford a bigger office space and bring on more developers to do art and design. They spent the next year updating and supporting the Train Conductor series. They started making things look easy. Then they started Puzzle Retreat.

It began with a simple idea. Artist Yangtian Li pitched a game about a Lumberjack where players cut down trees, collect wood and make furniture. Game designer Henrik Pettersson then saw the potential to the turn the game into a puzzle game where players knock down trees in certain orders. The team liked the idea, but felt bad about advocating deforestation, so they tried to come up with a theme that would make cutting down trees acceptable. Cue the Eye Of Sauron trees that were made to look evil so that players would have a reason to cut them down. But as much as the evil trees assuaged the team of their environmental guilt, they now had two new issues: the eyes were "too creepy" and could be potentially off-putting to players, and having "evil trees" meant players would inevitably ask about a backstory, which would have distracted from the tree-cutting itself.

The team went through dozens of iterations, first having a lumberjack character doing the actual cutting, then replacing the lumberjack with a cherubic leaf creature, then removing the character altogether. The game itself went from focusing on trees and gardens to not having any plants at all.

"What we really had trouble with was finding a theme that explains all the rules that are required for you to understand how to play the game," Joslin says. "So while it's a really simple game, you're standing in a forest, you're a lumberjack, you're cutting down trees, you need to understand these complex rules.

"You have to be standing next to a tree. Where you're standing to the tree will affect the direction it falls and you can't be standing on something else. The interface is super simple — you tap to move and cut — but there are these more complex nuances about the way the rules play out."

Over the next few months they culled everything they had and refined it to the bare basics. They looked to games like Sudoku where there are no themes, no visual distractions and nothing complicating what is already a complicated puzzle. It meant throwing out months of art and design, but it also meant having a cleaner, more elegant game that didn't have any of the problems the earlier iterations suffered from.

"There are no distracting themes, no cute characters and no crutches for the game to lean on. It's beautifully designed. It's just you and the puzzle."

Puzzle Retreat retains some of the mechanics of its tree-cutting predecessors. Players have to fill holes on a board, but rather than cut trees to have logs fall into said holes, players now slide ice-cubes. Ice-cubes can slide over each other. Fire cubes melt ice-cubes. The challenge is to use up all cubes while filling all slots on the board. It's a simple, minimalist game whose strength lies in the sophistication of its puzzles. There are no distracting themes, no cute characters and no crutches for the game to lean on. It's beautifully designed. It's just you and the puzzle.

The studio is now in a good place, unlikely to be kicked out of its office any time soon and with a bit more than $200 in the bank. Puzzle Retreat has been out for less than a day and is already charting around the world while Train Conductor continues to perform well. It looks like things will sail smoothly for the studio, but as The Voxel Agents will tell you, it's hard work making things look easy.

Puzzle Retreat is out now for iOS.