Share All sharing options for: Leading media violence expert warns town that game burning could do more harm than good

One of the leading world experts on the impact of violent media on children is warning Southington, Connecticut officials that their drive to collect and destroy violent video games could do more harm than good.

"Don't get me wrong, I am fully aware you are trying to do what you think is best," wrote Christopher J. Ferguson, the chair of the Texas A&M International University's department of psychology and communication. "But there is real risk in focusing people's attention on the wrong thing, as well as contributing to historical patterns of 'moral panic' that tend to surround new media (often despite evidence media is not harmful, even if it may be offensive)."

Earlier this week, a collective of Southington clergy, businesses and government officials announced a Violent Video Games Return Program that would offer up gift certificates in exchange for violent games, music and movies. The discs turned in during the drive will be snapped and likely incinerated, the organizers told Polygon. SouthingtonSOS officials have not responded to requests for comment for this story.

The return program, spurred by the mass shooting in nearby Newtown, CT, is tied to a call for local parents to have a conversation with their children about their gaming habits. The group told Polygon that the program is not intended to be construed as a statement that violent video games were the cause of the shooting. But they also said that "there is ample evidence that violent video games, along with violent media of all kinds, including TV and Movies portraying story after story showing a continuous stream of violence and killing, has contributed to increasing aggressiveness, fear, anxiety and is desensitizing our children to acts of violence including bullying."

Ferguson, who's written dozens of papers on numerous longitudinal studies on the topic of the impact of media consumption on children, and whose work has been cited by the United States Supreme Court and Swedish and Australian governments, says that's simply not true.

"There is real risk in focusing people's attention on the wrong thing."

"As a scientist, when we see that someone is saying something that isn't scientifically true, ethically we're supposed to take some time to try and speak with them and point that out to them," Ferguson said.

In the letter emailed on Wednesday to SOS officials, Ferguson offers up his expertise and help to the effort, pointing out that he's very involved in research in the topic at hand and warned that the group was wrong about any link between gaming and violence.

"I'm very appreciative of the sincerity of your group, but at the same time I've been concerned about some of your public statements linking video games to bullying and youth aggression which do not accurately reflect the science," he wrote in the email, a copy of which he sent to Polygon. "I've done a number of peer-reviewed articles myself on the topic, and have found no evidence linking video game violence to bullying or any other forms of youth aggression or violence. Past research has been mixed, at best, and often weakened by substantial methodological flaws. I'll attach a couple recent articles to a separate email in case of spam filters (and could send many more if you wish). And during the video game epoch, youth violence and bullying declined, not rose."

Ferguson went on to warn the group that their effort while well-meaning, could be dangerously distracting.

"It's classic moral panic," Ferguson told Polygon. "Whenever we have a traumatic event like this historically, going all of the way back to the Greeks, people tend to blame the media. It makes us feel like we know what happened and that we can fix it. It's very easy to get society to focus on the media as a bogeyman.

"I do worry this is going to represent a step backwards in our understanding of youth violence."

"It's what happened after Columbine. I think they are upset and they want to do something."

While Ferguson supports the idea of parents talking to their children about their video game and media consumption habits, he said linking such a discussion to the Newtown shooting would be a bad idea.

The problem, he said, is that children are likely aware of the shooting and the growing conversation about gaming and violence. Broaching the subject now, if a parent hasn't done so before, could come off as insincere or patronizing to a child, he said.

Ferguson points to another infamous "moral panic" that struck the United States in the 50s as an example of how distracting they can become to a nation and how absurd they are often viewed in retrospect. 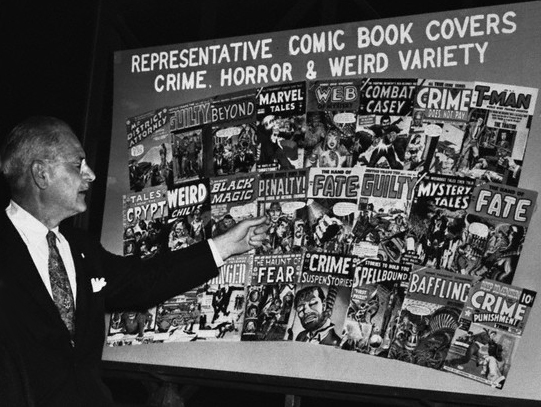 "Back then they had psychiatrists going before Congress saying comics caused not only delinquency, but homosexuality," he said. "We kind of look back on these things and sort of giggle and go 'Oh my god, I can't believe people back in the 50s thought comic books were making killers' and that kind of stuff. But then we don't learn from it. Whenever new media comes out we all freak out about that one too."

Ferguson's greater concern, he said, is that this moral panic could distract from a needed and serious examination of much bigger, more endemic issues.

"I do worry this is going to represent a step backwards in our understanding of youth violence, rather than a step forward," he said. "It's going to do kind of what Columbine did. It kind of distracted us from real issues and not do anything helpful."