Nvidia is getting serious about its streaming, cloud-based gaming business with the Nvidia GRID, the company's "fully integrated system product" designed and optimized to stream video game graphics through the internet.

At CES 2013, Nvidia CEO and founder Jen-Hsun Huang showed Nvidia GRID in action, streaming the game Trine 2 from the cloud to multiple devices, including a dedicated PC and an Android-based tablet.

Nvidia's new hardware, similar to offerings from cloud-based streaming services like OnLive, is "packed full of GPUs," according to Huang. Each individual Nvidia GRID server, Huang said, will support up to 24 concurrent users, with up to 20 GRID servers per rack. Each rack, Huang said, will boast 240 Nvidia GPUs and process up to 200 teraflops, roughly the computing power of 700 Xbox 360 consoles, according to Nvidia. 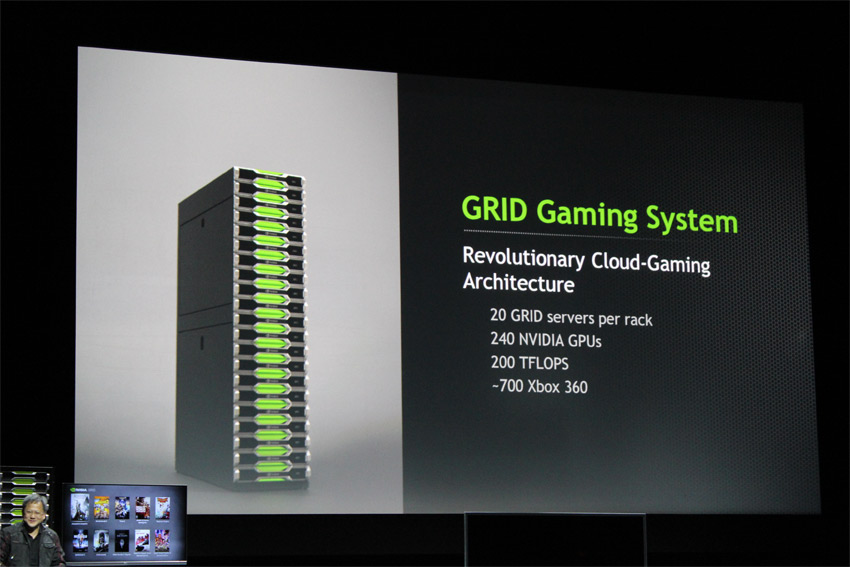 "Cloud gaming is an industry that's about to come to fruition, the enabling tech has been put together in a way that will allow cloud gaming globally in a very large way," Huang said.

Nvidia originally unveiled its cloud computing hardware, then known as the GeForce GRID, in early 2012.

We'll have more from Nvidia at CES 2013 later this week.