A look at the eclectic playground of Gaijin Games' Jason Cirillo

This is our very first installment of Playgrounds from outside of the Polygon staff and it's with great pleasure that we introduce Mr. Jason Cirillo, a designer at California-based Gaijin Games (makers of the BIT.TRIP series), and host of retro gaming web series Bit Museum. If you're a collector, developer or super fan with a collection worth sharing on Playgrounds, let us know at playgrounds@polygon.com! Take it away, Jason!

My name is Jason Cirillo, and I have been collecting weird, retro and obscure games for many years. I'm kind of a game history weirdo and get really engrossed in the crustier bits of trivia. I've got a pretty sizable software library, but the stuff I've always been particular fascinated by is old hardware. I've got a soft spot for strange Japanese stuff from the late 70s, early 80s. These are some photos from around my home office, which has been deemed the "real" Bit Museum by friends. It’s a humble collection, but I'm proud of be taking care of a tiny chunk of game history to pass on someday.

Full time, I'm a dad of two, a husband to a rad (and clearly tolerant and supportive) wife, and an artist and designer at Gaijin Games. I’m doing a lot of work currently on Runner 2: Future Legend of Rhythm Alien from the office in these photos. I’m probably a Gaijin lifer, since I am not sure I’ll find a group of people as enthusiastic of my bizarre addiction as much as these guys. I also founded Robotube Games about 12 years ago or so, which is now a part of Gaijin Games. We'll be releasing smaller, experimental titles under the Robotube label next year.

Working from "The Bit Museum" is always an inspiration. Sometimes I'll be working on something and run into a design problem, and I'll go and pull something out of my library to see how it might have been handled on some wacky title from 25 years ago. It's a source of constant ideas and learning for me. It makes for an amazing place to think and get excited about work. 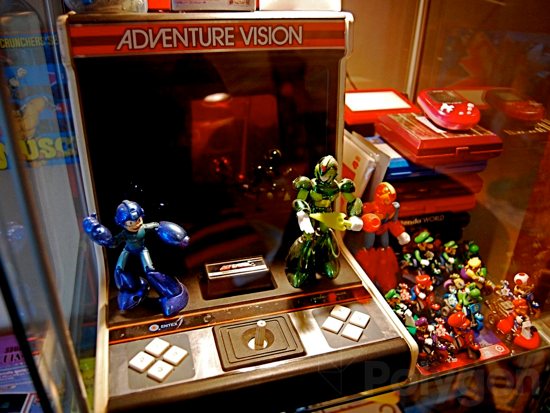 This is something I still can’t believe I have here, and maybe my favorite item in my office. The Entex Adventure Vision is one of the rarest cartridge based consoles in the world. I keep it in this glass case like its the Declaration of Independence, which I admit is super cheesy and silly, but it’s kind of my way of making fun of myself.

"Maybe a hundred of these things are still in existence, functioning." 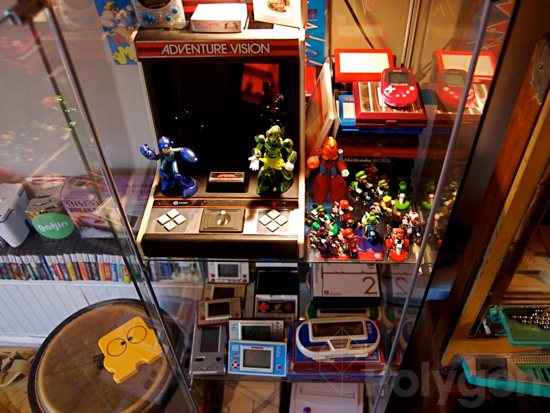 A view of "The Glass Case", featuring the AdventureVision, a pile of Game & Watch, and a few other weird knick-knacks. Lots of stuff in my office is from my own childhood. Keeping my stuff organized and out of view as a kid was the best way to evade my mom’s annual spring cleaning. Though, I wasn’t always successful and lost an entire ColecoVision and Atari 2600 cart collection when I was in college.

Reminder: Don't trust your parents to stockpile your childhood prizes! 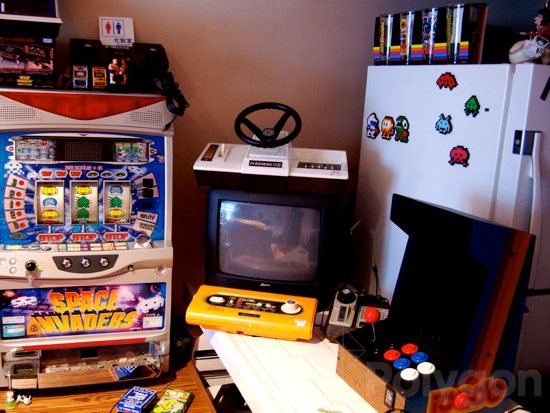 This corner of the room has a small bar where I keep my Space Invaders Slot machine as well as an old TV for playing some old consoles that use RF signals. They never look that great on new LCD televisions.

One day, that TV will be the rarest thing in this room. 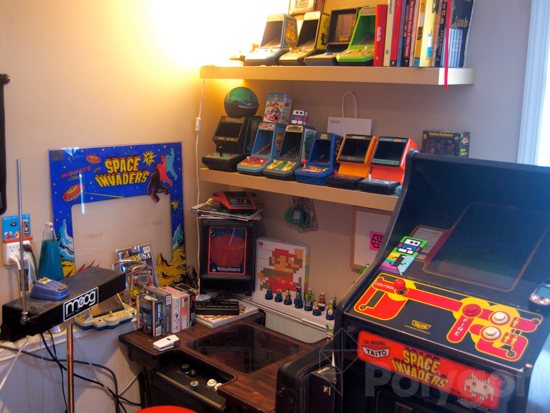 This is the arcade corner, where the Space Invaders cabinet lives, as well as a cocktail arcade game, the Vectrex, and a smattering of old tabletop arcade games.

Who says arcades are dead? 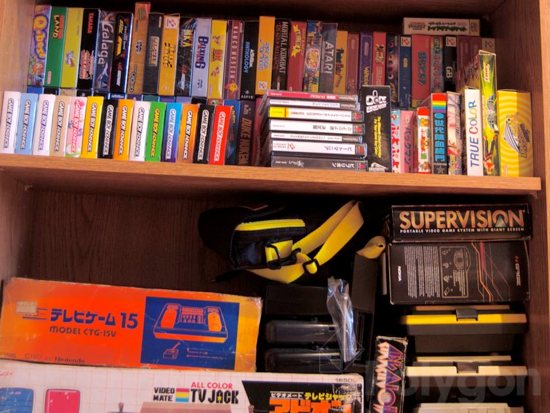 This is an old bookcase that has a random assortment of miscellaneous software and other neat things that I don’t really have a place for anywhere else.

Where do you keep your Game Boy-knockoff Watara Supervision? 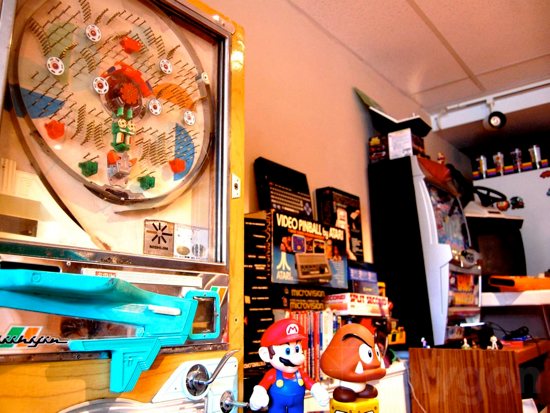 Here’s an old 1970’s mechanical pachinko machine from Japan. My wife bought me this a few years back for my birthday and it’s fascinating. No electricity needed, and it’s able to do all these amazing things with gravity alone. 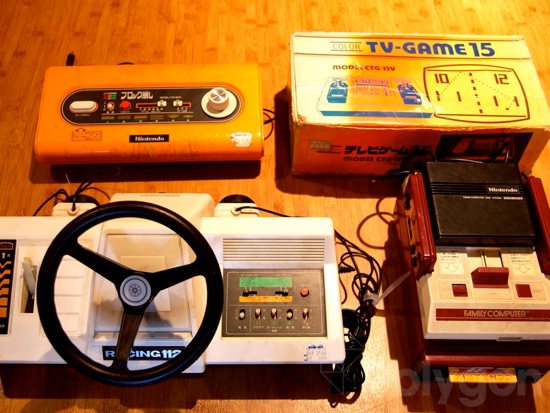 This is an assortment of Nintendo consoles I have. I am a huge fan of Nintendo. Their history is so rich and amazing. 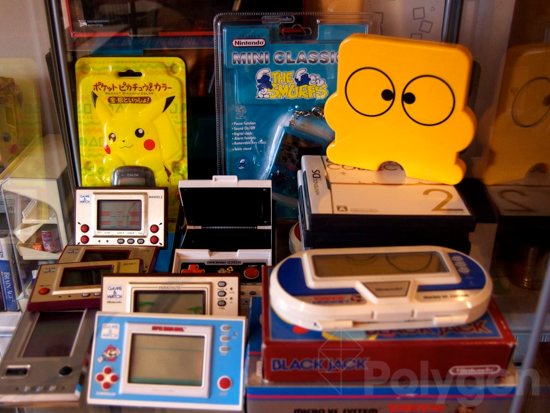 Note the really rad Disk-kun-themed Game & Watch, only available if you won a contest Nintendo held ... or eBay 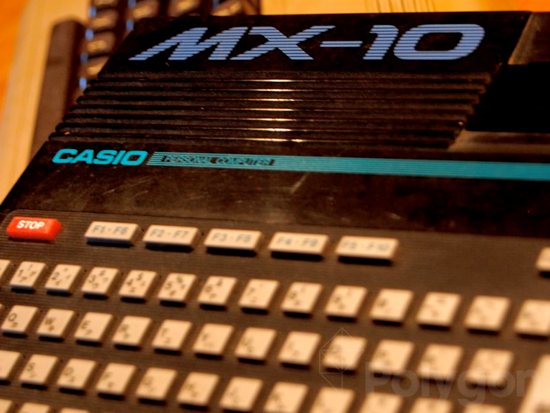 The Casio MX-10 was one of many MSX-compatible systems. The Metal Gear series made its debut on MSX hardware 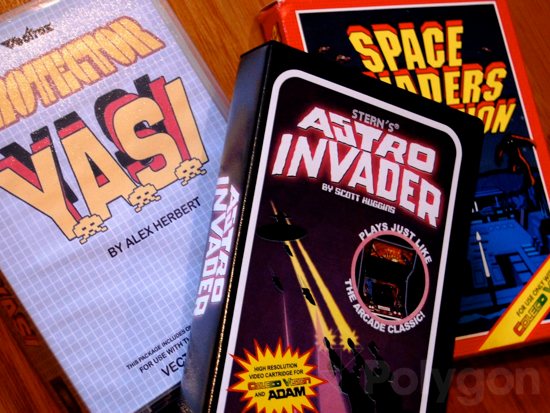 A few homebrew carts. I think people making new games for old systems and then putting them on carts is totally incredible. (I have an extremely bad Space Invaders obsession. It really is becoming a problem.)

This ColecoVision port of Astro Invader was created by Scott Huggins in 2005, the year the Xbox 360 was released 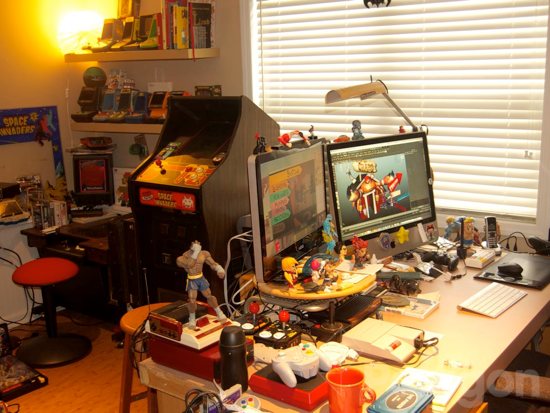 This is my actual work space where I do most of my work when I’m home and not at the Gaijin office. (I didn’t clean my desk for the photo.)

Please note Sagat crushing his own skull with his bare hand