Disney is partnering with toy company JAKKS Pacific and Los Angeles' wealthiest man Patrick Soon-Shiong to create a new line of toys for use with an accompanying augmented reality app on iOS and Android, the company announced today.

DreamPlay, developed by JAKKS and Soon-Shiong's technology company NantWorks, uses a smartphone or tablet's camera and a toy to trigger the display of preset animations on-screen, creating an AR experience. The app's images and video clips are stored in the cloud on remote servers and are streamed to devices upon recognition of specific toys.

"One of our top priorities is to integrate cutting-edge technologies with our incredible Disney content to transform traditional toys into interactive storytelling experiences that are uniquely Disney," said Disney consumer products president Bob Chapek in a press release. "Today's announcement is an exciting first step toward our vision of re-imagining conventional toys as new forms of play and digital entertainment that will enrich and enhance how the consumer interacts with Disney products."

News of the project comes in the wake of details about Disney Infinity, a sandbox video game being developed by Disney, Pixar and Avalanche Software. Early rumors suggested that Disney Infinity would incorporate physical toys into the game, following in the footsteps of Activision's popular Skylanders games and toys. Disney plans to detail Disney Infinity at an event in Hollywood next week.

"Our goal is to combine physical toy play with a digital experience incorporating the unique content that only Disney can provide."

According to Reuters, the app's image-recognition software was developed by Soon-Shiong. Shoo-Shiong is a former cancer surgeon who produced medicine for diabetes and breast cancer patients. He sold the companies making the drugs for $8.6 billion and teamed up to make DreamPlay with JAKKS, which holds the license to Disney's Princess franchise toy line as well as the Marvel action figure line.

JAKKS president and CEO Stephen Berman told Reuters that JAKKS plans to start selling DreamPlay toys based on the Disney Princess line this October, then expand the toy line and begin selling internationally in 2014. Toys will cost "a couple of dollars" more than toys not compatible with the app, he added. 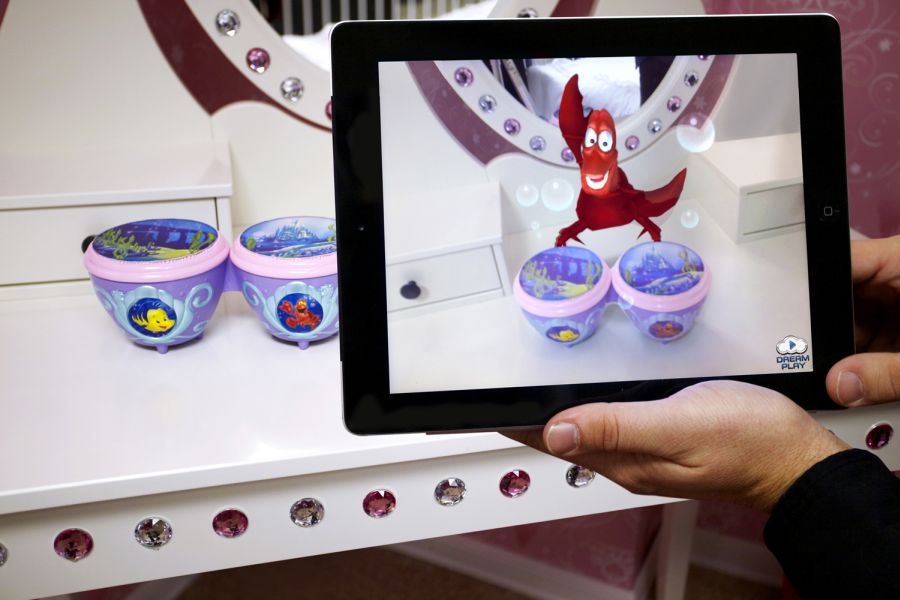 North American retailers Target and Toys R Us are among the first chains that will begin carrying DreamPlay. Nordic retailing giant Top-Toy and Chinese department store and supermarket operator Beijing Hualian Group are on board when the line goes international.

According to Chapek, DreamPlay will be the first in a line of products combining Disney toys and technology. He did not comment on these upcoming products. Chapek said Disney may also use different business models in the future, including subscriptions to content used with a specific toy.

"We are excited to work with Disney, our longtime licensor, to develop and deliver best-in-class play experiences for families to enjoy," Berman said in a press release. "Increasingly, kids are 'playing' with digital technology. Our goal is to combine physical toy play with a digital experience incorporating the unique content that only Disney can provide. By marrying toys and Disney to our DreamPlay technology using the powerful NantWorks iD recognition platform, we are merging the two ways kids are playing today, with smart devices and traditional toys, enhancing their experience and deepening the level of interaction with our products using their smart phone or tablet device. Children and their parents will be treated to a truly magical experience and endless possibilities to interact with their favorite brands and characters from Disney."

Disney, JAKKS and Soon-Shiong will demonstrate the app today on the showroom floor at the 2013 Consumer Electronics Show in Las Vegas. Polygon will be checking out DreamPlay, so stay tuned for our impressions.