Share All sharing options for: Valve's Greg Coomer talks Big Picture and the challenge of the Steam Box

We stopped by Valve's CES booth this morning and spoke with Greg Coomer, product designer at Valve and one of the earliest champions of Steam's recently launched Big Picture mode, which reformats the PC gaming platform with a living room-appropriate 10-foot UI. With its part of the software problem solved, Valve is now meeting with hardware developers and has brought "multiple" hardware prototypes to the show, including the Xi3 system unveiled yesterday.

"We're surprised that there aren't more PC manufacturers who are addressing the combination of form factor, meaning size, and things like noise and industrial design that seems appropriate for the living room," Coomer told Polygon. "And I think that maybe there's a situation in the industry where that got tried a number of times in the past and focused on HD video or different ways to get into the living room."

But those efforts never focused on video games. For Microsoft, Xbox was its solution to get games into the living room, not Windows. Coomer said, "Windows has never been interested in running in that environment. Media Center was kind of, but it didn't do well for other reasons. So we saw this need for this software piece to get addressed, especially for gaming."

That solution is Big Picture Mode, which Coomer began prototyping "a year or two" before the feature launched last month. "A few of us started putting together prototypes and specs for what that could be like. It took quite a while to build momentum," Coomer explained. "You probably know that at Valve, in order to get something off the ground, a bunch of people have to decide to work on it and to think it's important. So I and a couple other people spent a lot of our time articulating what that would be like for Steam before the project really got off the ground."

But before they were prototyping Big Picture, it was users that wanted Steam on their televisions. "Our customers have been wanting to access their games and their stuff in more places," Coomer said. "In some ways they were ahead of us in having that expectation. They were already clearly playing games in the living room, they had all this stuff that they loved about Steam and it was frustrating for them to not be able to access it in a place that seemed like a natural fit for the kind of content that they were playing."

Coomer said that Valve considered that shortcoming a "broken" part of Steam and Big Picture was the solution. While it couldn't solve the hardware issue in-house, "Valve was in a position to do something about" the software half of the problem. "We're uniquely positioned with Steam to have the backend pieces that made sense underneath that interface, so we of course were able to put together an interface. But it's everything behind that interface that's the valuable part. There are 50-some million active users of Steam and a huge catalog. A lot of people could have built the interface the way we did, but building it on Steam was the fit."

So now, with Big Picture released, Valve is tackling the next step in the process: convincing hardware manufacturers to make console-like computers that work for the living room. "We've seen a huge movement, just since the announcement and shipping of the Big Picture beta," Coomer said. "And the momentum and interest from PC manufacturers in building around it." 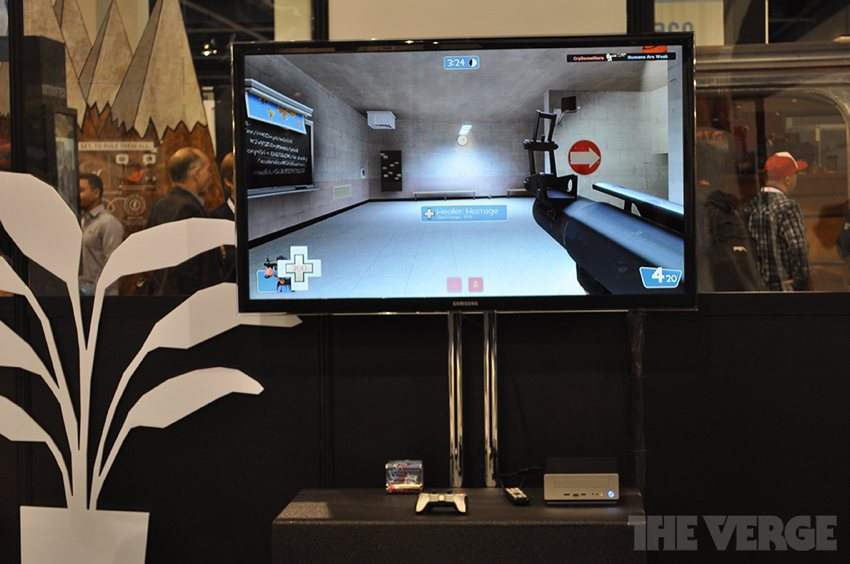 Some customers may want to boot directly into Steam Big Picture and never see the OS environment while others may want the OS rebuilt to be controller friendly inside the "Steam umbrella" while others still may want a full "desktop experience" outside of Steam.

And now at their booth at CES, with roughly 15 to 20 hardware partners lined up, surrounded by examples of possible "Steam Boxes" — a shorthand employed by the press that the company has never used — from the likes of Alienware and Xi3, Valve continues its pursuit of PC gaming on the television. That includes a device created and sold by Valve. Shortly after this interview, Valve CEO Gabe Newell told The Verge, "We'll come out with our own and we'll sell it to consumers by ourselves. That'll be a Linux box, [and] if you want to install Windows you can."

So Valve is trying to create a new device category with its hardware partners while hedging its bets by creating its own, providing just one more possible "Steam Box" for its customers and one more way to fix the problem its users first identified.