Rain pulls strong emotion out of its simple mechanics

PlayStation C.A.M.P. — the same team behind last year's quirky Tokyo Jungle — examines another offbeat topic for its latest project: What if you were invisible and could only see yourself or be seen by others when standing in the rain?

Rain explores this premise to its full potential without stretching it an inch further. It's a simple game, but it excited me with new ideas constantly, repeated itself rarely and ended just in time to avoid fatigue. And all along, it did something that few games accomplish: on a very base, fight-or-flight level, it made me feel. I didn't so much play Rain; it washed over me.

Beginning with a beautiful watercolor cutscene, Rain tells the story of an unnamed boy who discovers he has been turned invisible and let loose in the mostly abandoned streets of a strange city, his form only discernible thanks to splashes of rain. Before long, the boy runs into a similarly invisible girl who is on the run from a giant monster named The Unknown. Not sure of where else to go, the boy decides to follow the girl.

This simple, cute story progresses through short lines of text that appear on the environment as you explore. There aren't many cutscenes, and despite a fairly obvious metaphor — children running in fear of The Unknown — Rain never pretends it's any deeper than it is, save perhaps for the overly sentimental conclusion.

That straightforwardness in Rain's writing works wonders in its mechanics as well. The game uses just three buttons — jump, run and an interact button for everything else. With such a simple setup and static camera angles, each area communicates what can be done without the need for endless tutorials or hand-holding. When I walked into an alleyway with three dog monsters and a single, long sliver of canvas stopping the rainfall on one side, it wasn't difficult to put together the solution: sneaking by under the canvas so that I was invisible to the beasts.

Most of the game's scenarios involve navigating the environment without getting caught. In addition to the hulking figure of The Unknown and the swift dogs, the boy and girl run into numerous other strange, hostile creatures. Sometimes the duo can trick enemies into hurting themselves or turn them against each other, but they have no abilities or resources with which to take on their foes head to head. Each situation plays out like a tense puzzle, with the perfect mix of terror and testing wits.

Rain plays a constant tug of war between comfort and panic 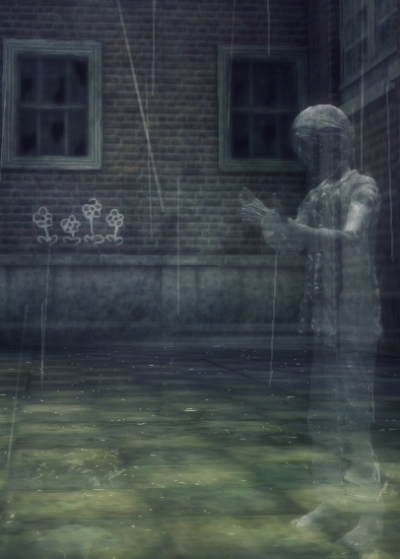 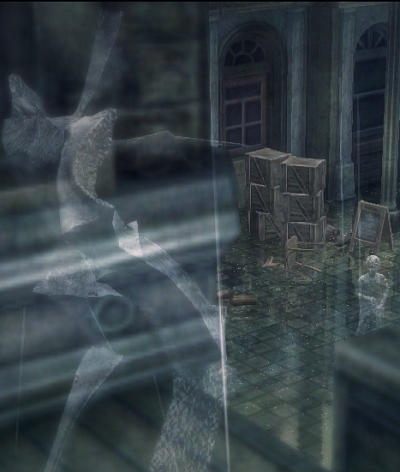 The tension is also aided by the game's well-realized atmosphere. Rain takes place in an unnamed town that feels like something out of western Europe — cobbled roads, tiny houses crammed together on thin streets and a musical theme alternating between soft piano and jubilant accordion. It's not meant to be anywhere specific — as far as the game tells it, at least — but it struck me as familiar and welcoming. When this space that I found a strange attachment to was suddenly invaded by enemies eager for my destruction, it was all the more jarring and horrific.

Rain plays a constant tug of war between comfort and panic. At one point, I stumbled across a quaint church and enjoyed its peacefulness for a few moments before the murderous Unknown crashed through its gates. At another, I ran into a delightful circus, not as a child partaking in its glee, but because I had to rescue the girl from mortal danger. The penalties for getting caught aren't enough to frustrate — checkpoints pop up even mid-chase — but the momentum of the gameplay still controlled my emotions tightly, dragging me through to completion in a mere two sittings.

You could finish Rain faster than even that. It's not a long journey, and the collectibles you unlock to encourage replay upon finishing it are very much beside the point. But aside from a handful of moments spent waiting for a creature to pass or for the girl to react to a certain situation, Rain doesn't waste any time. It doesn't rehash the same puzzle types over and over or revisit the same parts of the city. It didn't allow me to get overly complacent or bored.

Rain pulls strong emotion out of its simple mechanics

I appreciated Rain all the more because of its briefness, its ethereal nature. The mechanics are engaging enough, but it didn't challenge me or force me to learn complex controls. It wasn't about those things. Rain is an anxious emotion â something that pulled me in with a setting so charming that I wanted to spend time there even when I was on edge.