My router was beaten soundly up close — from a distance, the Nighthawk savaged it

Share All sharing options for: Next-gen routers are here with Netgear's Nighthawk

Netgear's Nighthawk router is aimed specifically at me (and maybe you).

My home/home office situation is a wireless nightmare scenario. I live in an apartment building in the Bay Area bombarded from every angle by wireless interference. My MacBook Pro sees somewhere around 25 wireless networks from my complex at any given moment, which isn't counting the networks it doesn't list from every apartment building around me. As I speak with Netgear Director of Product Marketing Sandeep Harpalani about the company's new consumer flagship router, I explain that I can't get a reliable wireless signal in my bedroom, which sits about 40 feet away from my current router, a Linksys E3000 purchased in late 2011. My Wii U's GamePad loses a signal about 12 feet away from the system.

On the cusp of a new console generation, I've been thinking a lot about wireless connections, and how my wireless connections are awful despite my dropping what I thought was a pretty decent amount on a router. I would never think of running a current-gen console on wireless, and for next-gen consoles, with their likely-to-be-giant file sizes and download heavy ecosystems? That just seems stupid. When I walked into my appointment in San Francisco to speak with Harpalani and other representatives about the Nighthawk, I was skeptical.

After five days with the Nighthawk, I'm ready to put down the $200.

First, back to my appointment. Netgear put together an impressive and at times exhausting presentation. The Nighthawk is designed for "gaming, streaming and mobile connections," per the company's slide show. The new router is what Netgear is calling AC1900 — meaning that in addition to the 1,300 Mbps speeds of the 802.11ac standard, it's also packing a more powerful 802.11n radio that supports up to 600 Mbps (twice as much as my current router, the aforementioned E3000). As important is the processing power inside of the Nighthawk, according to Harpalani: a 1 GHz dual-core processor and 256 MB of RAM. These specs allow for the Nighthawk's main selling point: quality of service prioritization for games and streaming media.

After five days with the Nighthawk, I'm ready to put down the $200

The Nighthawk can identify game consoles on its network and give them what is essentially carte blanche over your internet connection's upload speed, which most affects your connection in online multiplayer. Netgear is offering "one-click" optimization via a button on the front of the router, which invokes specific rules in the hardware for gaming-related traffic.

It's worth mentioning that Netgear sees meaningful growth opportunity for this kind of router on the cusp of the new console launches. Netgear Vice President of Product Management, Retail Business David Henry put it simply: "The number-one-selling week for new router sales isn't Black Friday, it's not the week before Christmas and it's not the week before school. It's the week after Christmas, because they got that game, they got that iPad and they have to go back and buy a new router."

why should gamers care? Why should anyone care?

The question, though, is why? The Nighthawk has an impressive spec sheet, to be sure, and its profile is reasonably slick for the second-least-cool piece of hardware in most gamers' range of kit — modems being the first least cool — but why should gamers care? Why should anyone care? This is where we come back to me, and my nightmare wireless scenario.

My situation isn't uncommon in urban and even suburban areas. We're in an age of wireless devices, and router penetration is quite high. The Nighthawk is engineered for this scenario. In addition to the powerful internal radio and three powered antennas that radiate off the rear of the box, the system software is able to ascertain the wireless environment surrounding your home. "When the router boots up, it looks for a clear channel on 2.4 GHz, or the least occupied channel," Harpalani says. "In the upcoming (firmware) release in October on the 2.4 GHz band, we're doing some enhancements specifically for the 2.4 GHz band. But 2.4 GHz is a busy channel. I think features like Smart Connect will be a great help, because most people don't know that 5 GHz is available, and that it's a less crowded band. Other than that, it's about the improved range and performance. It will be impacted by other routers and devices on the network, but even the reduced performance and range will be better than what you've seen so far." 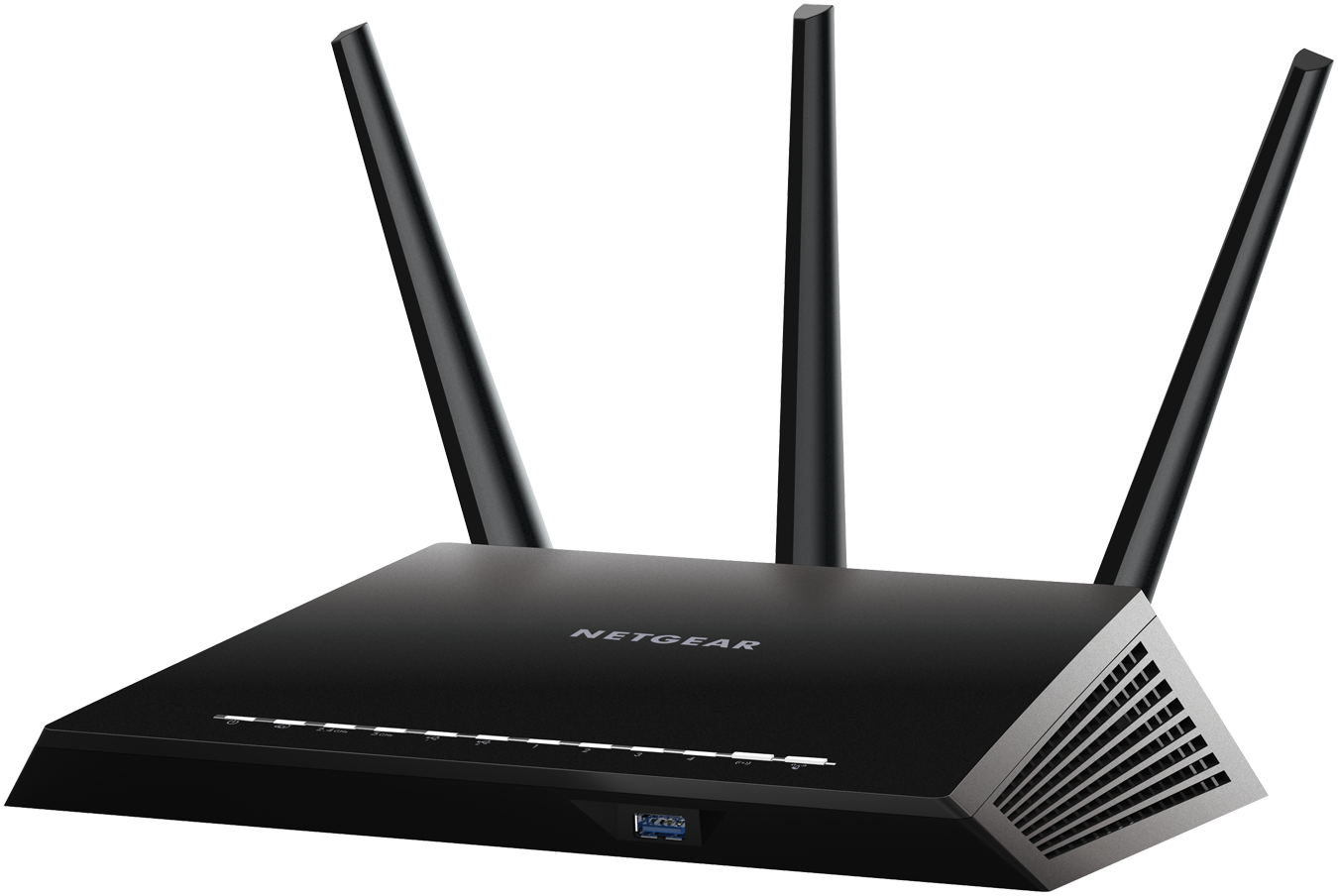 The Nighthawk is packing other buzzword-backed technologies to enhance its practical range, in particular the explicit beamforming feature of 802.11ac — which involves the router and the wireless device coordinating with each other to determine where the device is, and where the router should locationally direct its signal. While this is limited specifically to 802.11ac devices, which are few, a firmware update scheduled shortly after the Nighthawk launches is set to introduce something called implicit beamforming, which should offer similar functionality for 802.11n devices.

But marketing speak doesn't always guarantee results. I left my meeting with Netgear with an early retail version of the Nighthawk to test on my own home network. In the interests of due diligence, I did some basic bandwidth tests around my apartment on my existing E3000 over wireless.

My E3000 was soundly beaten up close. From a distance the Nighthawk savaged it

But my wireless problems aren't situated near the router; it's getting any appreciable distance away that introduces connection issues. In my bedroom, my E3000 yields just 5/2 Mbps down/up on 2.4 GHz and 21/22 Mbps down/up on 5 GHz. That last number is misleading, though, because 5 GHz's reduced effective range prevents me from maintaining a reliable connection on the 5 GHz radio. With the Nighthawk, this problem has been eliminated. My MacBook has been comfortable and reliably connected on either band. And it's doing it at 31/8 Mbps down/up at 2.4 GHz and 102/23 Mbps down/up on the 5 GHz radio. 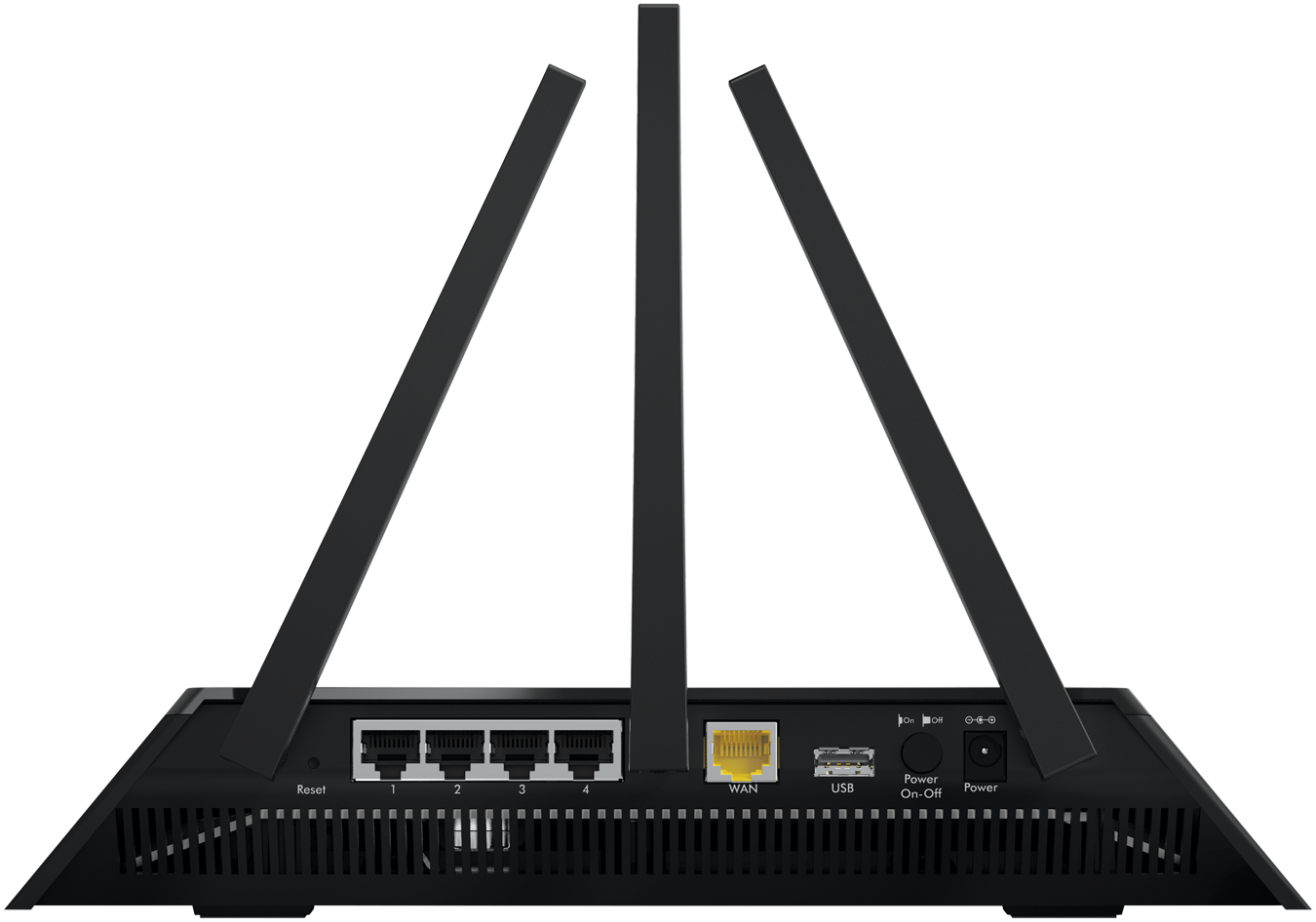 Again: the Nighthawk yielded a completely reliable connection, which my E3000 fails to do, at around five times the speed. My E3000 was soundly beaten up close. From a distance the Nighthawk savaged it. I got better speeds on the Nighthawk in a lower-story courtyard outside my apartment than I did inside of it on the E3000.

I haven't had the time to do more thorough testing of the Nighthawk — I haven't noticed a marked change in network latency in online multiplayer, though I've gone through the trouble of setting up proper port forwarding with the E3000, something I've neglected to do with the Nighthawk. I'm excited to see what kind of improvements Netgear makes with the first firmware release, but in the meantime, the stunning wireless performance of Netgear's new hardware has made me a convert without it.

The Nighthawk will be available from retailers this month for $199.99 USD.