EverQuest 2, the free-to-play MMORPG from Sony Online Entertainment, is undergoing something of a bold experiment starting today; players who are so inclined can now skip the first 85 levels of progression, giving them instant access to endgame content.

For 3500 Station Cash — approximately $35 in SOE's proprietary digital currency — players can unlock a level 85 character of any class to play; they can also upgrade an existing character, boosting their level and equipping them with suitable equipment for their new rank. Today marks the beginning of a special "Hero's Call" promotion, which runs through Oct. 15, and allows one free, permanent Heroic character to be created per household for new players; pre-existing players can create or upgrade one Heroic character per account.

It's an interesting prospect, driven by the scale of the online title and a desire to let new players party up with their higher-level friends, franchise director of development Dave Georgeson told Polygon in a recent interview.

"We're essentially creating a shortcut for people to go to level 85 without invalidating that level 1 through 85 content, if that's what they want to play — you can always start at level 1 and move up," Georgeson explained. "But we wanted to make sure that players could get together really easily, so that when friends come back to the game, they can find their other friends and be able to adventure."

EverQuest 2 is a "top heavy" game, Georgeson said — meaning a large ratio of its content is found in its endgame. Level 85 players can still level up 10 times to reach the title's current level cap, and some of those levels contain their own "prestige" levels for characters to rank up through. Heroic Characters give new players — perhaps those who have recently picked up the game for free — an opportunity to jump straight to that content, for a price. 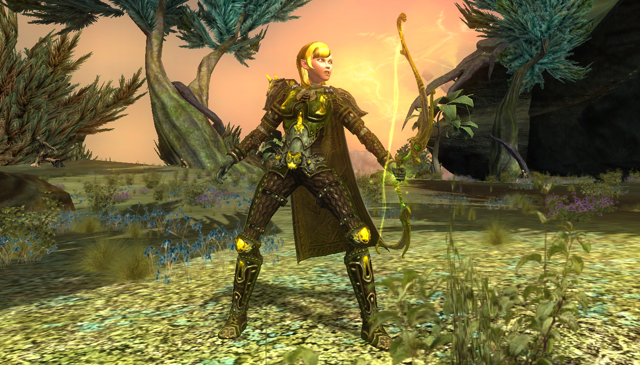 To keep new or returning players from being overwhelmed by the dozens of abilities at their new heroes' disposal, Sony Online Entertainment has created a scaling system of simplified hotbars for each class. The feature — which can be turned off if you don't need the training wheels — only shows you that class' most essential abilities. Once you're proficient with those, it will add more and more powers to your arsenal until you're up to speed.

"We did do a fair amount of testing, and I think that was the biggest feedback, even for people who were familiar with the game — like our testing team, our QA team, they spent the first half hour just figuring out what buttons to push. We wanted to eliminate that," senior producer Holly Longdale explained.

One of the cleverest features of Heroic Characters is that players will be able to play through a single level of progression with them for free before purchasing them permanently. In a sense, it lets players have a trial run with each of EverQuest 2's classes to see how they operate in the endgame. This not only lets potential buyers be more secure in their purchase, it solves a long-standing problem with MMOs — the character creation process rarely does a good job of preparing you for what your hero's duties are going to be like a few dozen hours of playtime later.

That demo period seems like it could be revolutionary for the genre; so does Sony Online Entertainment have plans to incorporate a Heroic Characters system for the plethora of other MMORPGs in its catalog?