Dungeon Keeper remains faithful to the original through humor

Share All sharing options for: Dungeon Keeper remains faithful to the original through humor

The remake of Dungeon Keeper will feature brighter, more eye-catching visuals than its predecessor, but remain true to the franchise through its sense of humor, Mythic senior producer Jeff Skalski told Polygon during an interview today.

"It has a little bit more of a mature tone to it," Skalski said. "We kind of consider it as 'this is the party that's going on underground, beneath all the candy lands and happy renaissance-esque castles and dragons going on aboveground.'"

In addition to new, brighter visuals, Dungeon Keeper also features fully revamped touch controls — a move Skalski called as natural as "peanut butter and chocolate." The game's signature finger cursor, known as the "hand of evil," is replaced by the player's finger.

During our demo, we were able to dig out new rooms, recruit more minions and slap imps with a simple tap or swipe. Enemies that invaded could be turned into chickens and squished, or toasted with finger-directed fire. As players flesh out their dungeon, Skalski told us, they'll acquire more minions and resources to continue building. Players can focus on digging themselves, but the best way to gather resources is to engage in the game's PvE or PvP campaign. 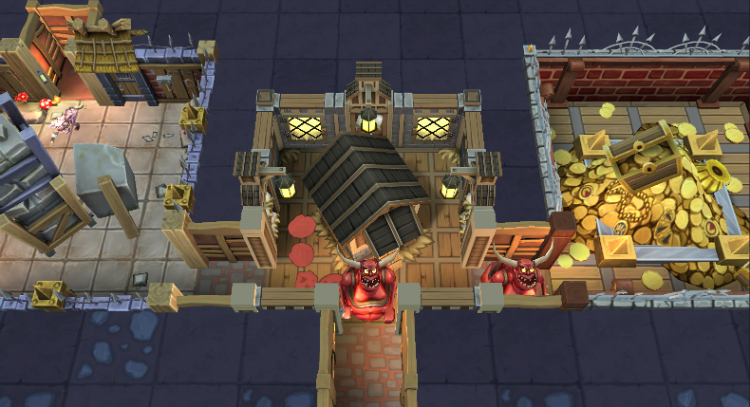 Dungeon Keeper can't be played completely offline and in PvP, the game will match players against others of comparable power level. When facing off against opponents, each player has a Dungeon Heart that players must protect "at all costs;" take out the Dungeon Heart first and you'll score an instant victory.

The game's PvE campaign features around 30 maps to best. As players work through them, they become progressively harder. Players can participate in daily challenges or test their dungeon's strengths by essentially playing against themselves. Unlike the original game, where players moved between many dungeons, you'll stick with one.

"You build up your dungeon," Skalsi said. "This is great for [players] who just want to maximize the strategy and understand everything about how their dungeon works against people trying to attack. You can see where the weaknesses are and change up your strategies a little more."

Dungeon Keeper will be available for iOS and Android devices this winter.