NBA 2K14 is the most incremental upgrade in the recent history of the acclaimed NBA 2K franchise.

The most noticeable improvements over NBA 2K13 come on the court itself, where developer Visual Concepts has delivered its most refined simulation of basketball to date. And NBA 2K's renowned presentation remains excellent, with its broadcasters still providing the best commentary in sports video games.

But there's a sameness to NBA 2K14 atypical of the franchise, a perennial contender for sports game of the year for most of the current console generation. NBA 2K14 is as competent as ever, but there isn't much in it that hooked me like previous entries in the series.

Visual Concepts has changed NBA 2K14's controls for the third year in a row. Dribble moves are performed by flicking and rotating the right stick, while the left stick controls the direction of your movement. (You can also perform basic dribble moves with the left stick.) To shoot, you hold the right stick in a particular direction and release it to let go of the ball. The left trigger — instead of acting as a shooting/dribbling modifier like it did last year — allows you to make flashy passes with the right stick, but trying that with someone who's not a skilled passer is just asking for a turnover. 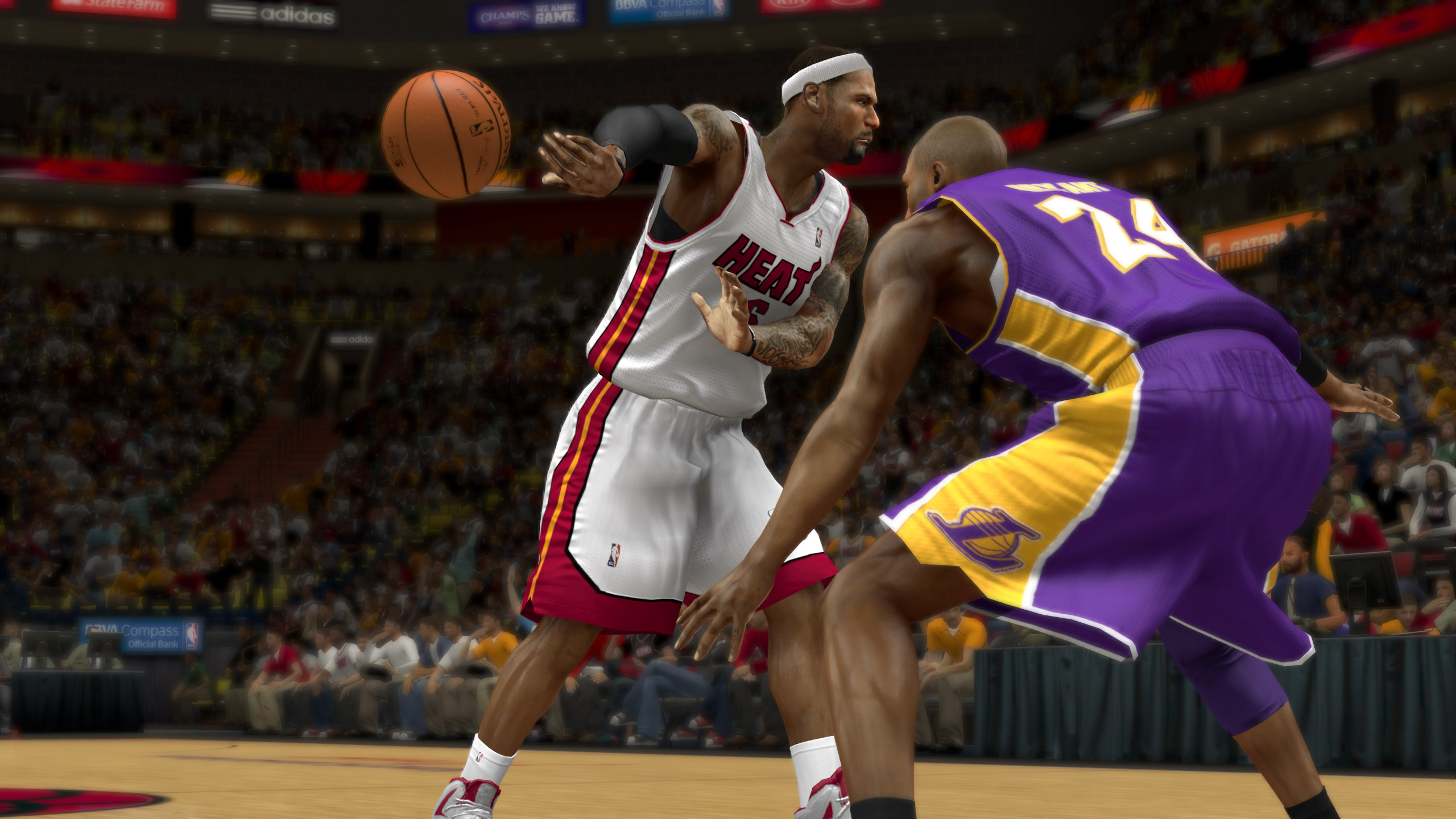 I was frustrated being forced to un-learn NBA 2K13's controls and come to grips with NBA 2K14's rebuilt implementation, but Visual Concepts may finally have hit on the best combination of analog stick moves and trigger pulls for digital basketball. I was able to grasp the controls more quickly than before, and it's impressive that the studio managed to tweak the system while retaining all of NBA 2K's existing functionality. The removal of the aforementioned trigger modifier means there's much less of a delay, however slight it was, between thought and action when it comes to shooting.

NBA 2K14's on-court action benefits from changes that sound subtle but have a material effect on the flow of the game. The offensive and defensive AI is noticeably improved: Players do a much better job of positioning themselves on the floor. They're always moving around, trying to create space or defend it — instead of causing a logjam. This change is hard to quantify, but NBA 2K14 looks and feels more like the real sport for it.

Players do come together occasionally, and audio cues like grunts make those collisions feel more satisfying and impactful. Contact between athletes is also more meaningful — if you're careless about collisions, they'll often cause turnovers. You can't just drive at defenders anymore, unless you're playing as someone with ankle-breaking dribble skills. You'll get bumped, smothered and stonewalled — and you'll come away without the ball, let alone any points to show for your trouble. 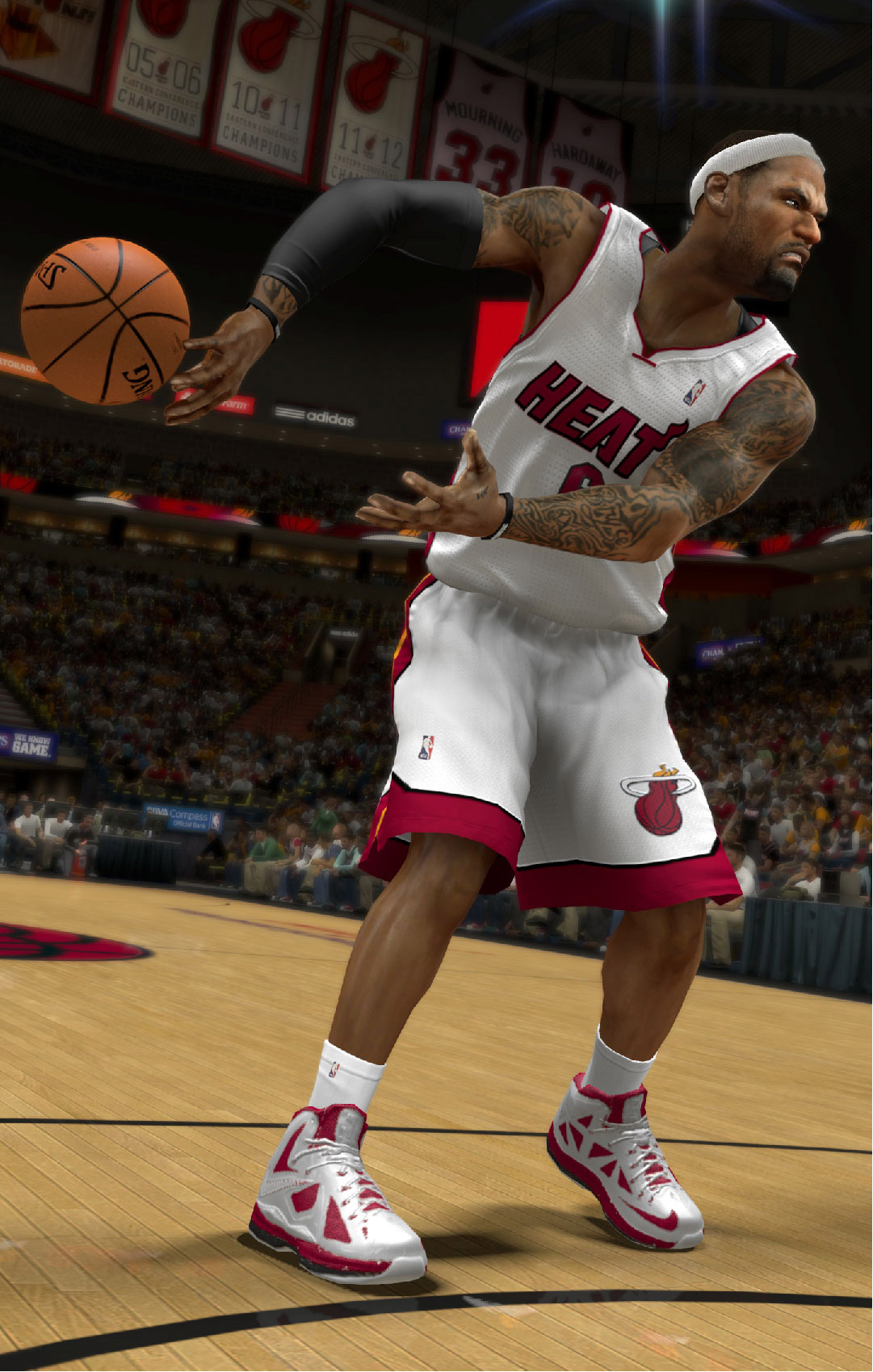 The NBA 2K14 servers were unavailable during most of our review period, and we were unable to try the online portions of the game for this review. That includes the Crews mode, which returns after a two-year hiatus, and MyTeam, which now features tournaments and lets you play against your friends. We'll be testing these online features once the game launches this week and will update the review if they significantly impact our assessment of the game.

On defense, I routinely swatted the ball away for both steals and blocks, and I saw a higher frequency of goaltending calls, too. The ball itself feels more active than before, which is a boon to offensive/defensive balance; I'm still not a good defender in NBA 2K14, but I'm not as incompetent as I used to be.

NBA 2K14 also helps out novice users on offense with a new control: Press a button, and the game will select the best play for you and provide graphical overlays on the court so you can see how to run it. This is by far the best tutorial in a series that has always lacked effective guidance, since you learn something about how basketball works by watching the visual cues and executing the plays.

But the few truly new elements in NBA 2K14 don't do much to elevate it above previous entries in the series. There's one new mode, LeBron: Path to Greatness, which is based entirely around cover athlete LeBron James. It lets you play out two different roads for the next seven years of his life in the NBA. LeBron's future is the most hotly debated topic in basketball at the moment, so it makes sense that Visual Concepts would want to capitalize on that discussion. 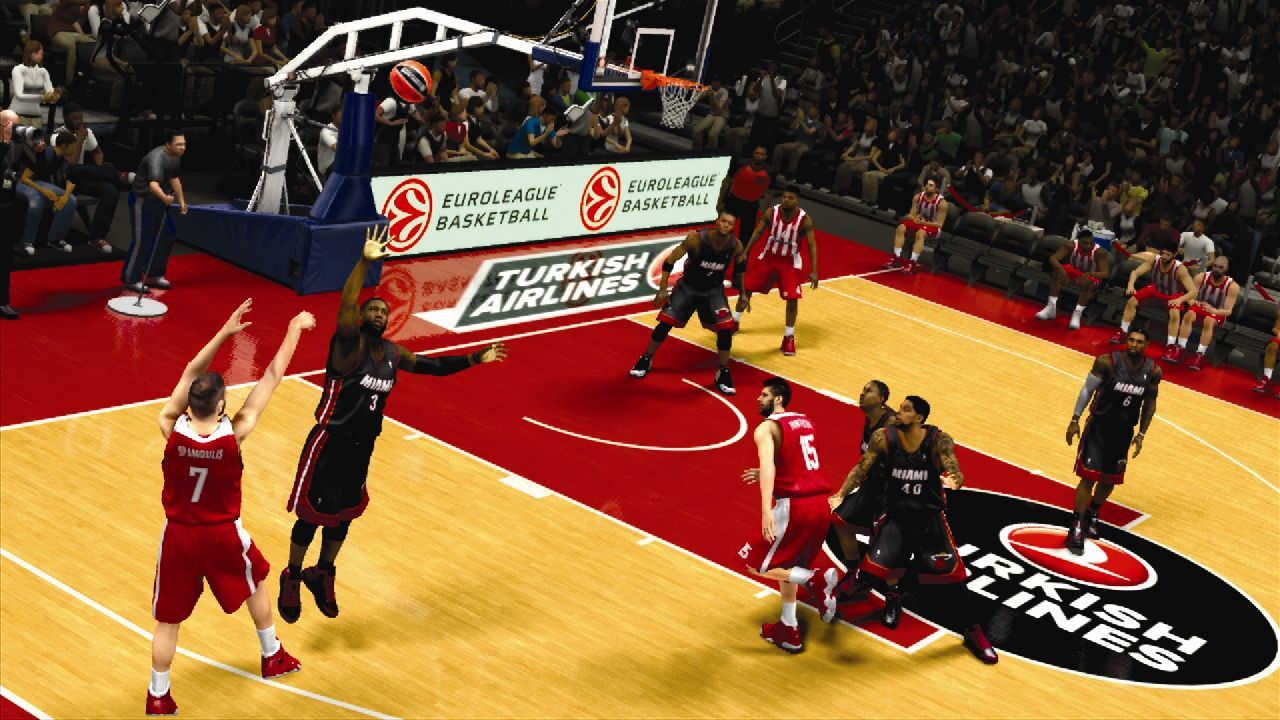 Visual Concepts continues to discard each year's special mode after just one game. I would have loved to be able to play the Jordan Challenge and NBA's Greatest events — from NBA 2K11 and NBA 2K12, respectively — but only the historical teams from those modes remain. Last year's Olympics squads, by the way, are gone.

Plenty of surprising, if unlikely, events occur, and the terrific commentary team discusses the developments as you progress through Path to Greatness, a nice touch. The mode is almost entirely scripted; the paths can differ depending on whether you win or lose a scenario, but, for example, you don't get to choose where LeBron goes when he leaves the Miami Heat. I was also surprised that in a mode named after LeBron, I was still playing as his entire team, not controlling him alone.

Initially, I had a lot of fun seeing the outlandish scenarios that the developers came up with. But the novelty quickly wore off, especially as the challenge ramped up. I'm indifferent to LeBron as far as fandom goes, which made it harder to find anything to appreciate here. Path to Greatness is joined by the debut of Euroleague clubs, but they're unceremoniously dropped into NBA 2K14's team-select menu instead of highlighted in their own mode.

The two major single-player modes, MyCareer and The Association, return largely unchanged from last year. MyCareer still requires you to know how to play good basketball, but doesn't do much to teach the sport to you. Eventually I figured out what not to do in order to prevent my grade from dropping — like never, ever calling for a pass — but that process felt more like learning by trial-and-error than a proper education.

MyCareer feels more like trial-and-error than a proper education

NBA 2K14 plays well enough on the court, but the rest of the game fails to match it. It's not a turn for the worse for the highly regarded series. But it's the first NBA 2K title in years that I can't unequivocally recommend â especially with next-generation versions of the game only six weeks away.