For the past year, the creators of the Oculus Rift have maintained that the best, most innovative experiences for their virtual reality headset will come from small, independent developers. They're the ones willing to take risks, they say, the game makers unburdened from traditional thinking.

Those smaller developers, Oculus says, will be the trailblazers, inspiring other game makers to create their own VR-enabled games.

"The VR rulebook is being written right now," Nate Mitchell, VP of product at Oculus, told Polygon in an interview. "And there's a very high probably that the killer apps [for Oculus Rift] don't come from AAA developers, but from indies just trying new things. It's pretty much a level playing field in terms of game design."

To promote that idea, Oculus recently held an extended game jam in collaboration with Indiecade, offering up to $50,000 in prizes. Some 400 teams competed, with more than 200 games ultimately being submitted. Mitchell said it was an opportunity to "get people experimenting," so that other developers can learn about the possibilities of VR and explore games that can't be achieved on a monitor.

"We're big believers that great software drives hardware adoption," Mitchell said. "Helping developers build great games and content makes the content that much stronger. Without great games, the Rift is just a heavy pair of ski goggles, right? By working with developers to do a game jam, giving them the opportunity to innovate, it gave them an opportunity to try new things.

"Because VR is an entirely new medium, we wanted to give people a chance to play with it for 24 hours and then change, change and change; give them a chance to fail fast and hard, then iterate to to see what works."

At this past weekend's Indiecade festival, Oculus brought what they consider some of the best VR experiences created by indie developers during that three week-long game jam. Those experimental games included titles like Dumpy, an on-rails first-person game in which you wield a colorful elephant trunk. Players wreak playful havoc by whipping their head and Dumpy's trunk around. 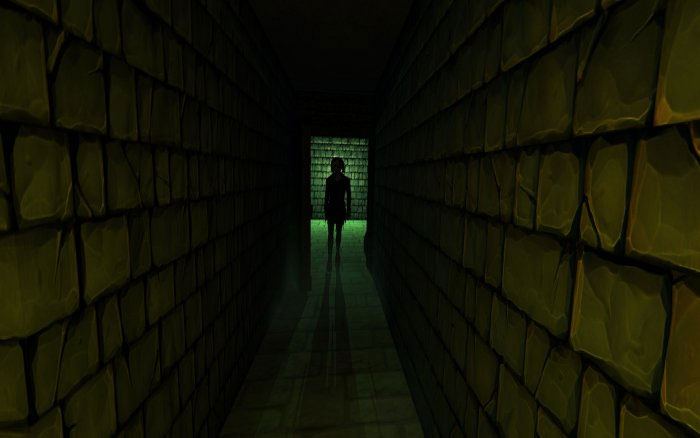 Other highlights from the Oculus VR Jam appearing at Indiecade included Dreadhalls, a first-person dungeon crawler that masterfully captures the sensation of creeping through a haunted house. With scant light available to the player from oil lamps, Dreadhalls is not only an immersive horror experiment, it illustrates how well head-tracking can be used to complement and simplify the user interface. Simple things, like physically looking down to bring up a procedurally generated in-game map, work perfectly. But it's the act of being able to peek around a corner, tilting your own head and seeing a pair of dimly lit eyes staring back at you, that really sell the Oculus Rift.

Many of the Oculus VR Jam finalists and winners are available to download from the competition's website. Mitchell says Oculus is working with developers to bring some of the game jam titles "to fruition," but it's up to the individual creators if they want to flesh out their games further and release them commercially.

Oculus' VR game jam, Mitchell said, was full of surprises for the company, which works closely with game developers and does "tons of prototyping internally."

"People are always sending me things that I'm surprised that they work... or don't work," Mitchell said. "As a gamer, I was skeptical at first of third-person in real-time strategy games [on Rift], and now I've played multiple third-person RTS and god games that have worked flawlessly.

"There's a bunch of stuff I can't talk about that has blown me away."