Bigby’s hunt for the killer plays out a little like Law and Order: Fabletown Victims Unit

Blending story and games has been a decades-long struggle, but last year Telltale Games made some pretty fantastic headway with its dark, heart-wrenching take on The Walking Dead. With The Wolf Among Us, the studio has moved from wasteland to fairy tales, adapting Vertigo/DC's long-running Fables property. Despite the change in scenery, Telltale is adamantly sticking by its proven approach from The Walking Dead.

If you’ve missed the Fables series during its decade-plus run, here’s the abridged version: Cast out by a powerful enemy called The Adversary, characters from fairy tale lore have abandoned their Homeland and moved to their own secret crevice of New York called Fabletown. Since secrecy from us humans (or "mundies") is their top priority, fables that can’t blend in (like the Three Little Pigs or Mr. Toad) must move to a remote hiding spot called The Farm or pay for a glamour to make them appear human. Fables are also immortal, provided human belief in them holds out.

… Well, almost immortal, as is proven by the opening minutes of The Wolf Among Us. The head of one then-unnamed fable is deposited on the steps of the Fabletown Business Office. As Fabletown’s sheriff, the task of tracking down the culprit falls to Bigby (the reformed Big Bad Wolf, who understands the importance of rebranding).

A lot of the fun of the books — and the game, by association — lay in seeing how fairytale icons have evolved during their time amongst the humans. The Woodsman who rescued Red Riding Hood is an abusive drunk. Prince Charming is a despicable womanizer with political aspirations. The Wicked Witch’s chief flying monkey? A librarian. Naturally. 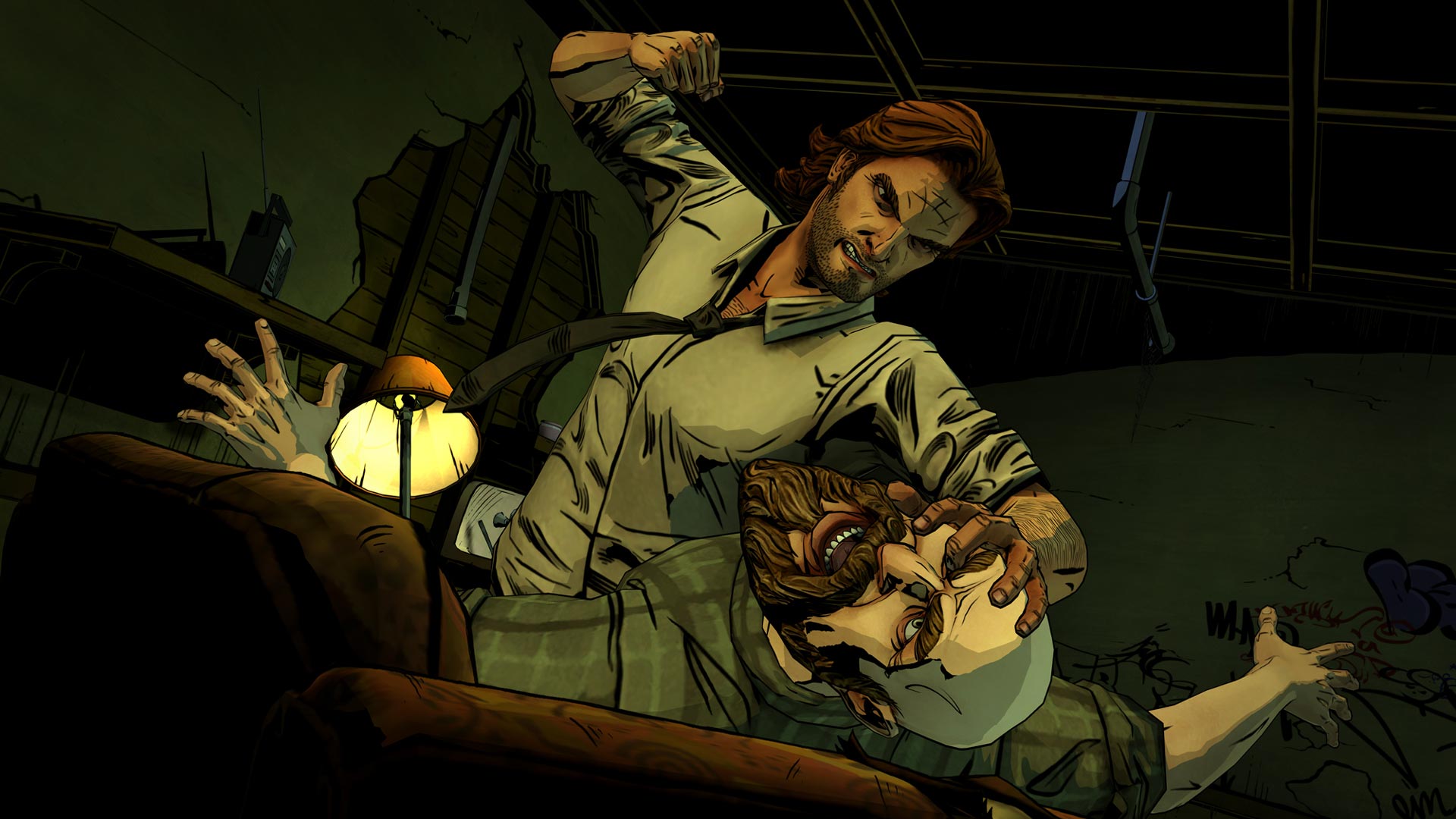 Bigby’s hunt for the killer plays out a little like Law and Order: Fabletown Victims Unit, at least in this first episode. The sheriff follows leads from one potential crime scene to the next, typically relying on a player-dictated blend of sleuthing, diplomacy and lupine violence. Nearly every structural facet of The Walking Dead has carried over to Wolf Among Us. You control Bigby with the left thumbstick while combing for clues and other interactive bits with a cursor on the right thumbstick. There’s a limited inventory of items, but you’ll only ever have the opportunity to use them contextually — there’s little room for experimentation.

When the action heats up, you’ll be relying on prompts to push a thumbstick in the correct direction or hover a cursor over the right spot so Bigby can deliver the perfect punch with one of the triggers. It’s all very scripted, but the time pressure helps it feel appropriately intense.

Bigby’s hunt for the killer plays out a little like Law and Order: Fabletown Victims Unit

Though the The Wolf Among Us is a prequel to the comic series, a twist late in the episode seemed to turn Fables' existing timeline and canon on its head. Provided there’s a good explanation later in the series, it’s a smart move that won’t allow Fables readers to get too comfortable.

That’s a trait shared by conversations, which ask Bigby to choose investigative paths, potential suspects and even casual responses under the metaphorical gun. This was great for keeping me invested in the story, and it made conversations a lot more gripping. That goes double when on-screen messages indicate that a decision you’ve made has had an impact on the story or a character’s opinion of Bigby.

The Wolf Among Us evolves the established formula, if only marginally. In one sequence, as Bigby grilled a shifty Mr. Toad for information, the sheriff could catch him in a lie if the player was playing close attention to the amphibian’s spiel. There have also been some significant improvements in the UI from Telltales previous work with The Walking Dead, with button prompts that are far more dynamic and help to make life-or-death moments even more tense.

If your takeaway from that previous paragraph is that I’m grasping for differences, you wouldn’t be wrong. The Wolf Among Us is, structurally, tonally and (for the most part) visually, lifted directly from The Walking Dead. Typically, that serves the game pretty well — they’re both story-centric experiences and this design methodology makes story the star. But The Walking Dead’s rotten skeleton isn’t always a great fit for Bigby.

Brief fist fights and foot chases aside, the first episode of the new series has something of a languid pace (which, if the sounds my Xbox was making are any indication, is partially caused by brief pauses to load dialog). This works for the sense of ever-present dread The Walking Dead cultivates, but is an ill match for the breezier Fables which is known to dispatch with entire months of time if they don’t serve the story’s brisk pace. The problem is exacerbated by frequent 20-30 second load times.

And, even though it comes very close, the strength of The Wolf Among Us' writing doesn’t quite match up to The Walking Dead. Bigby especially relies on a little too much boilerplate noir detective patter at the expense of making him less relatable as a human. Or, a wolfman, I suppose. 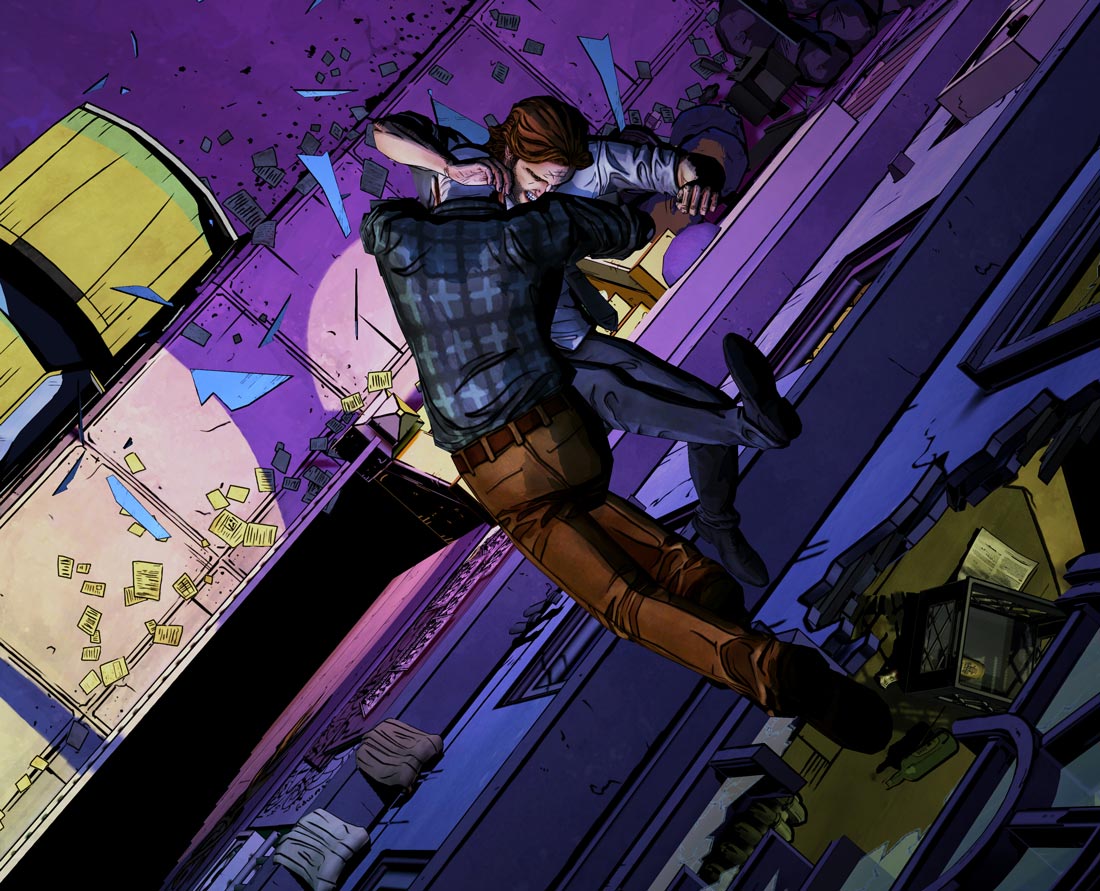 The Wolf Among Us' first episode promises more than it delivers

By the end of this first two-and-a-half hour episode of The Wolf Among Us, I was absolutely in for seeing how the series plays out. But my enthusiasm was largely based on the novelty of seeing other characters from the books pop up and unravelling the threads of the central mystery Iâd begun to untangle. Hereâs hoping by the time the series ends, this intriguing world is populated by characters worthy of the fairytale icons theyâre descended from.

The Wolf Among Us Episode One was reviewed using a "retail" Xbox Games Store code provided by Telltale Games. You can find additional information about Polygon's ethics policy here.