Share All sharing options for: Maxis on finding the right tone for a futuristic Sims 3 expansion

The Sims 3's latest expansion pack, Into the Future, seems like a simple concept: Take the long-running Sims franchise and set it in a futuristic world. But according to developer EA Maxis, the studio had to carefully construct that world because of all the existing history of the series.

"We had to appeal to everybody without alienating anybody," said Justin Thomas (above right), art director on The Sims 3: Into the Future, during a panel at New York Comic Con yesterday evening. According to Thomas, designing the art of Into the Future was a complex process with significant constraints and other considerations.

The Sims 3 was originally released in June 2009, and Into the Future will be its eleventh expansion pack since then. That means that Maxis is stuck with the technology it has; for compatibility and performance purposes, the studio can't overhaul major elements of the game or go too far beyond the foundation that The Sims 3 provides. For example, the team couldn't create dense cities for Into the Future because the game can't support more than eight to 10 Sims in a given space, and because such a city would simply take too long to load when players jump back and forth between expansions.

Into the Future contains plenty of pop culture references, but according to Thomas, the art team at Maxis had to be particular about the media that it drew on. The studio's directive for Into the Future was that the expansion couldn't go too far into science fiction, too far into the future or too deeply into a post-apocalyptic setting. 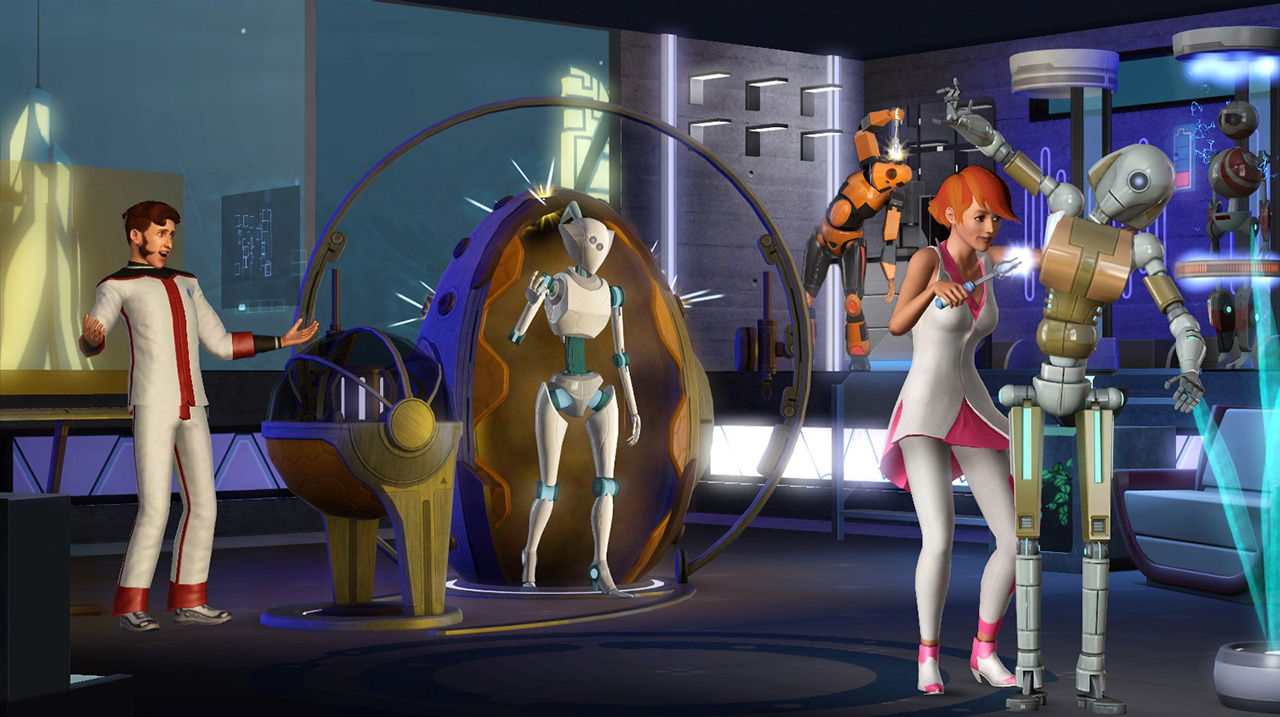 Thomas went through a few different sets of pop culture inspirations and then explained why Maxis didn't go in those directions. For one, many of the most indelible portrayals of the future in pop culture come from movies such as Blade Runner and The Fifth Element. But since The Sims 3 is an all-ages experience, references to a 30-year-old film would likely fly over the heads of much of the game's user base.

Age restrictions were part of the reason that a dystopian future — another common trope in science fiction — wouldn't really fit for The Sims 3, which has always been, according to Thomas, a "bright, upbeat, colorful world" in which you can tell mischievous stories. And some films, including Back to the Future Part 2 and Looper, feature a near-future setting that's relatively conservative, too close to the present day.

Taking all that into consideration, Thomas and the artists at Maxis decided to go with a "bright, aspirational utopia" for Into the Future. Silver and white are the dominant colors in the expansion's vision of tomorrow. The world contains robots that function in the same ways as traditional humanoid Sims (there's a robot creation tool akin to the Sim creation system). And instead of flying cars, which Maxis thought were a bit too outlandish, the vehicles in the expansion hover a foot or two off the ground.

The Sims 3: Into the Future will be released Oct. 22 on Windows PC and Mac.