Paradox Interactive's spellcasting, player-versus-player action game is a rethought sequel to its predecessor, Magicka. Like fans of the original would expect, it includes dozens of spells that players can mix and match to obliterate their opponents. But Magicka: Wizard Wars is a refinement, and some new changes are in store for old and new fans alike.

Polygon spent some hands-on time with a pre-alpha version of Magicka: Wizard Wars recently and learned from its developer just what's in store, what Paradox hopes to accomplish through the Steam Early Access community and how the Street Fighter series wound up being one of the game's major influences.

Magicka: Wizard Wars arms you with eight different elements from which players can create dozens upon dozens of destructive spells. The elements are mapped to the Q, W, E, R, A, S, D and F keys. By typing key combinations, players can add fire effects to lightning spells, for example, to fend off opponents in four-on-four matches.

The game's often literally explosive action is designed around this basic loop: click to move, type to cast and unleash destruction on those around you. You die, you respawn, you jump back into the action. It's incredibly frantic, but not without an element of mastery; and that's how Magicka: Wizard Wars' moment-to-moment combat was influenced by Capcom's long-running fighting game series.

"It's Street Fighter that's been one of our major inspirations," said David Nisshagen, lead designer at Paradox North. "The original Magicka had a story of rock, paper, scissors system. There was always at least one defense to any offense threw at you. So we've taken that and sort of solidified it a bit, removed a couple of the corner cases and [the] really crazy stuff."

Paradox has implemented a shield system that can deflect attacks and barriers that block projectiles. The end result is combat that can ebb and flow like a fighting game.

"If you see two very skilled players playing defensively, they can go for a very, very long time, just playing, attacking, trying to find holes in the other person's defense. It becomes like the real good Street Fighter duels, where people are blocking, dancing dodging, predicting in a sort of mind game way what the other person is about to do. And then you unleash this super special combo thing and actually break through. It becomes very, very accelerating to see."

The alpha version is available for purchase through Steam Early Access via three packages that grant players robes, weapons, alpha invites and more. Nisshagen was quick to point out that the game's final paid offerings haven't been determined yet, and that Paradox doesn't want the final free-to-play game to fall into the pay-to-win trap.

The eventual purchasable items and even the final gameplay is still up in the air, and Paradox hopes to use player feedback throughout the Steam Early Access period to refine Magicka: Wizard Wars. 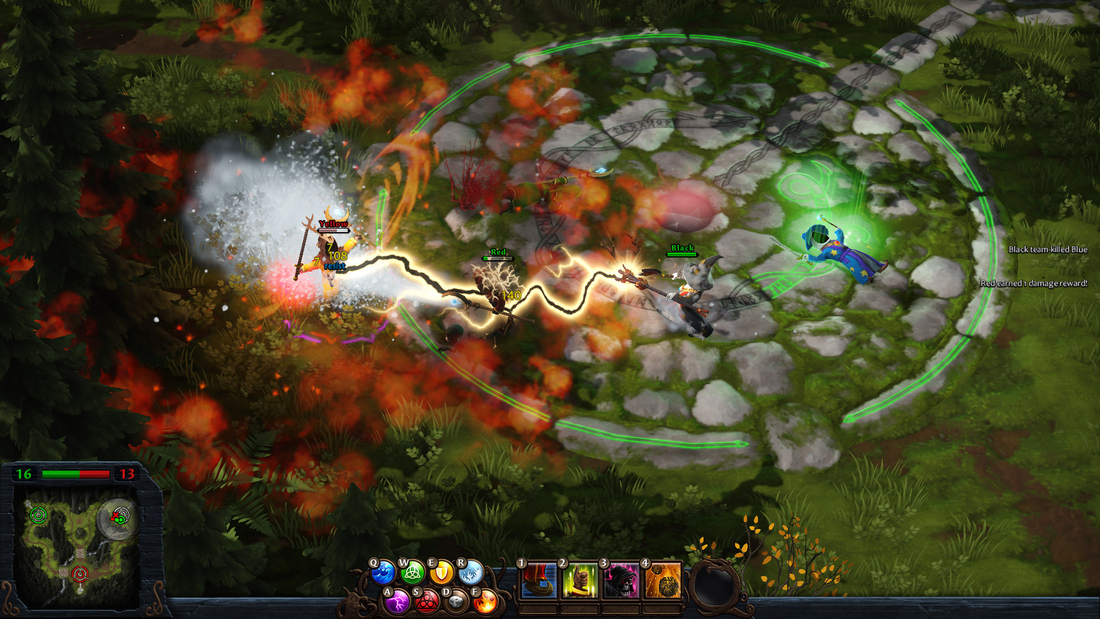 "Paradox traditionally has a very strong community," he said. "And we have the forum system where people voice their opinion. Paradox [makes] smart games for smart people, so the quality level of discussion on these forums is high. It's smart people that can eloquently phrase their opinions. They speak well.

"Even though we have a slightly different target audience with Magicka: Wizard Wars than we have with, say, Crusader Kings 2 or [Europa] Universalis 4, we still feel that the discussions in these forums is really high quality. So we've created ... a sort of directed discussion area in these forums, where we throw out questions."

Nisshagen also said that Paradox will be in contact with players to let them know about the upcoming alpha's roadmap to beta and beyond, which he thinks will probably happen in early 2014. During this pre-release phase, he hopes there will be a dialogue that creates the final game.

"It's the whole beauty of Early Access," he said, "that you can actually get people — the players — [and] ask them what they want, and we will try to implement it as quickly as possible."