Bringing a video game into the real world with Anki Drive

Share All sharing options for: Bringing a video game into the real world with Anki Drive

Video games with physical components have seen a great deal of success in recent years, most notably Activision with its Skylanders series and, more recently, Disney with Disney Infinity. Anki, a robotics and artificial intelligence company based in San Francisco, has a different idea: The company's first product, Anki Drive, is a video game that takes place in the real world.

"Despite all the great things about video games, they're trapped in the screen and they'll never be able to fully replicate that emotional connection that people, not just kids, form with physical things in the real world," said Boris Sofman, co-founder and CEO of Anki, in an interview with Polygon last week.

Anki's goal with Anki Drive, according to Sofman, is to "program video games on top of physical characters in the real world." Sofman and another member of his team debuted Anki Drive during Apple's 2013 Worldwide Developers Conference this past June, demonstrating the product's basic functionality: Small cars race around with their own AI and behaviors on a specially printed track, with an iPhone behind the wheel running things over Bluetooth 4.0 low energy. (Check out our previous interview with Sofman for more on the origins of Anki Drive.)

The high-tech, low-cost components of the physical pieces of Anki Drive — the cars, the track — are crucial to Anki's ability to manufacture the product at a consumer-level price. But the platform is the key to Anki Drive's chances at mass-market success.

"Probably the biggest factors in us being able to do what we're doing is mobile devices," said Sofman. "They're becoming so prevalent, where almost everybody has access to mobile devices of some sort. And now we can make use of them as this incredible computation [and] interface device, and a portal to the internet, that almost comes for free and lets us make products that would be prohibitively expensive five years ago, but today are very, very powerful but at a price point that you couldn't imagine previously."

Anki Drive's cars aren't much larger than Hot Wheels. But these futuristic-looking vehicles are packed with enough technology to be able to sense their surroundings 500 times per second, relay that information to the brains of the operation on a mobile device and then execute on their route. Anki is launching Anki Drive with one track that can support as many as four cars at once.

The game itself can be described as a car combat title. It runs on the Anki Drive app, which interfaces with the physical cars to bring that experience to life in the real world, as opposed to on a screen. Sofman and his fellow co-founders, Hanns Tappeiner and Mark Palatucci, count themselves as fans of video games but didn't have experience making them. So they brought in game developers to design the game component of Anki Drive.

Sean Levatino has worked primarily on AAA console games at companies like High Moon Studios. But according to Levatino, it was his experience at Zindagi Games as the lead designer on the PlayStation Move launch title Sports Champions that most directly prepared him for working on Anki Drive.

In Anki Drive, "a lot of decisions are made for you by physics," explained Levatino, lead game designer on Anki Drive, in a phone interview with Polygon this week. "You have to actually be aware that the world around the player is the place that they are playing."

The development of Sports Champions, said Levatino, was "the first time I had to be aware of the player as a physical entity, outside of someone simply just giving input to controls." He added, "It was a really good introduction to having to think about physicality."

Anki's engineers designed the cars' incredible artificial intelligence, which gives the vehicles the ability to drive with a speed and precision that Sofman said would equate to the following real-world situation: driving down a corridor at 250 miles per hour, with one-tenth of an inch of clearance on either side. For the team developing the game, that AI served as the foundation of the experience, according to senior producer Charlie Hite.

"A lot of the [...] very core parts of AI," said Hite, whose career includes stints at Industrial Light and Magic, Electronic Arts and LucasArts, "[are] actually a little bit more akin to, in a normal video game, the game engine."

The AI created Anki Drive's game world, and it was up to the developers to design interactions with that AI that players would find interesting. The way they did that was to layer elements of a role-playing game into Anki Drive.

The cars are like classes in an RPG; each of the four has its own personality and play style, and they can all be upgraded. You can improve a vehicle's arsenal with upgrade points that you earn by playing the game, and by doing so, you'll be customizing the vehicle to fit the way you like to play. That data — accrued upgrade points and the improved car components themselves — lives on the vehicle, the same as with a figure from Skylanders or Disney Infinity, so you can bring your own unit to a friend's house and play with your upgraded racer.

During our demo, Sofman repeatedly referred to the cars as "characters," because that's the way Anki is designing the vehicles and the game. The company wants players to build relationships with their cars, not only from a physical standpoint — the attachments we form with our childhood toys — but also by becoming invested in them as they customize the virtual versions of those vehicles, as with a character in an RPG. And the AI is what provides the personality that differentiates the cars from each other.

Rho, the red car, is a defense-focused model that's fast and agile, and absorbs attacks with an inductive shield. Boson, the silver vehicle, is a "striker" whose tractor beam can slow down and eventually disable its opponents. The yellow unit, Kourai, can drop mines that cause other cars to spin out. And Katal, the blue car, is another defensive vehicle, with a reflective shield that can deflect attacks.

The mobile device that Anki Drive runs on controls the cars. You tilt it to steer, while using the screen to manage speed and use weapons. Since the action takes place in the real world, it manifests in light and sound that the cars emit. You'll hear gunfire, electric zapping, glass breaking and more, and a vehicle's flashing taillights will tell you that it's being attacked.

The physical nature of Anki Drive "forced us to only [...] include designs that really had a very strong qualitative effect on the player's experience," said Levatino. "Because it has to be something that we can really see on the vehicles, and we can see in the AI, and we can see how it drives and how it reacts."

"Actually having a character that can react realistically to being shot, or being pulled in with a tractor beam or being hit by another car, that's really powerful, because you don't expect that to happen with a physical character," said Sofman. "We want them to feel like they're human, like they're alive, like they have a personality."

Sofman repeatedly referred to the cars as 'characters'

It may sound almost primitive, these little cars lighting up and playing pew-pew sounds as part of a game. But when kids play with normal, non-sentient cars, they can build an entire world in their imagination, even as they're using their hands to move cars around on a coffee table. Anki is hoping to tap into that spirit of play, that physical connection that can be even stronger than playing a video game.

"It's pretty amazing to see how well your brain fills in the gaps," said Sofman. "Obviously, we can't visualize, like, explosions, and bullets flying through the air, and sparks and things like that. But if you have the right behavior in lights [and] perfect realism in sound, in motion, in vibration on your device, it's amazing how real it feels, and how much more powerful that impact is than just seeing it on the screen." 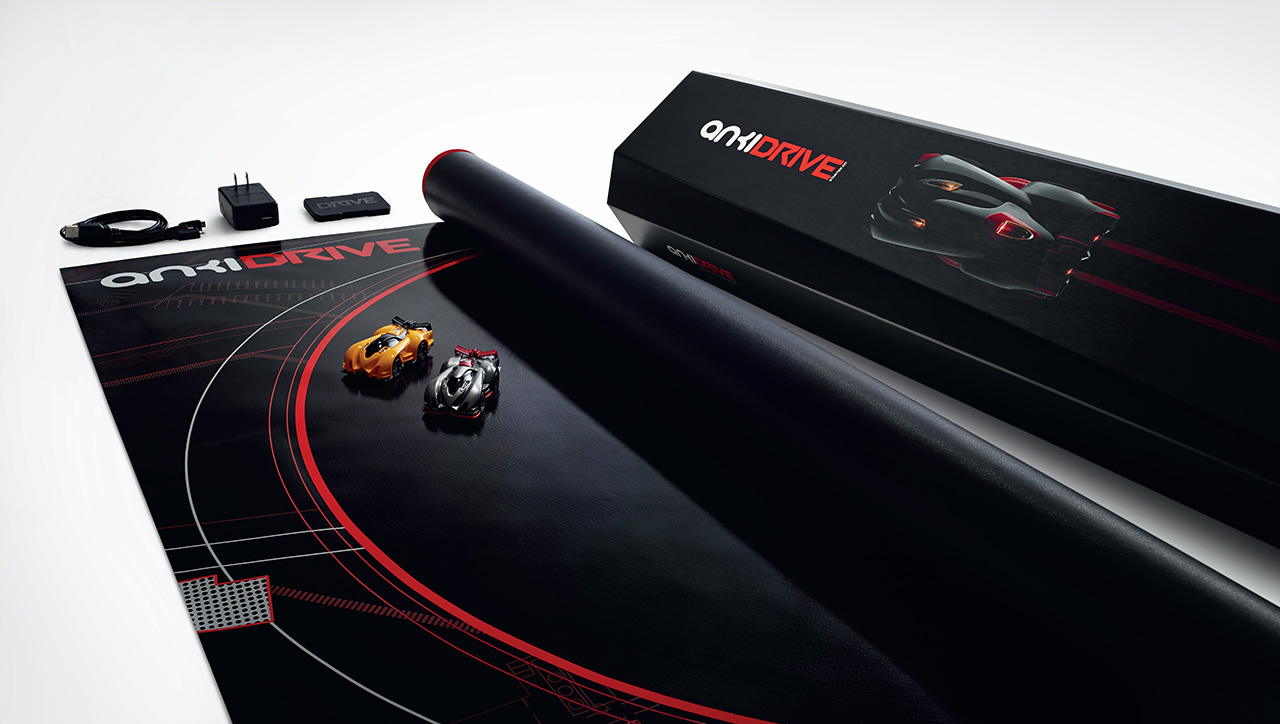 Anki is releasing Anki Drive as an iOS title because Apple has built the best ecosystem and the largest audience for mobile gaming. Sofman told Polygon that the technology in Anki Drive is platform-agnostic, so Anki can bring it to other mobile devices in the future. But Apple is getting behind Anki Drive in a big way: When the product launches Oct. 23, it will be available in every Apple Store across North America, as well as from Anki's and Apple's websites.

And considering the asking price, the retail arrangement with Apple and the iOS-only release certainly make sense for Anki. The Anki Drive base kit, which comes with the track and two cars (Boson and Kourai), will cost $199; the two expansion cars, Rho and Katal, will sell for an additional $69 each.

Anki is banking on the fact that its potential user base numbers in the tens of millions. Anybody who's interested in Anki Drive doesn't have to buy a gaming console; they just have to own a relatively new iPad, iPhone or iPod touch. And Anki is promising that the launch is only the beginning for Anki Drive and the company's consumer-oriented robotics technology.

"When you look at Anki Drive and what we've built, it's not just about a racing game; it's about a platform where we give physical characters the ability to understand their situation and their environment, and then come to life with a purpose, with an intention, with a personality," said Sofman. "And that is something that is powerful well beyond the version of Anki Drive that is going to be available at launch."