Arma 3 does not have time for you.

Bohemia Interactive made the decision to release it anyway.

Arma 3 may be the most challenging, and the most rewarding, online shooter I have ever played. But it's missing key components — most damning of all a single-player campaign. As a result, it feels more like a huge demo than a finished product.

Without a plot, Arma 3's speculative future is reduced to graphical pastiche

The focal point of Arma 3 is the infantryman. You get the feeling that you are a cog in a massive military machine. Armor rolls in behind you to support the assault, helicopters scream by with cannon blazing to keep the enemy’s head down. It is a game about visibility, finding your target and fixing them in place while teammates move in for the kill. You will spend as much time looking at a map as you will firing at enemies you can barely see.

But Arma 3 goes a step farther and allows for you to take every role on the battlefield. You can be the tanker on the front line, the helicopter pilot ferrying ammunition and men, or the mortar team dropping rounds on a target from a kilometer away.

You can even be the commander, and lead the assault via radio turning the entire game into an RTS. It scales incredibly well, and has an AI capable of filling every role.

It wants to tell a futuristic story set in the 2030s where Arab countries leap-frog the West technologically. It's a daring choice. NATO infantry resemble today's special operators, like the SEALS or Army Rangers. Against the lizard-like helmets, integrated binocular heads-up displays and futuristic ammunition of the Arab CSAT faction, western forces look decidedly old-school. It's an interesting role reversal.

But without a plot Arma 3's daring bits of speculative futurism are reduced to mere graphical pastiche. As it has been released, without a single-player campaign, it’s just a collection of vehicles and weapons. When playing NATO you don't feel overmatched, and when playing CSAT you don't feel superior. You’re just there. 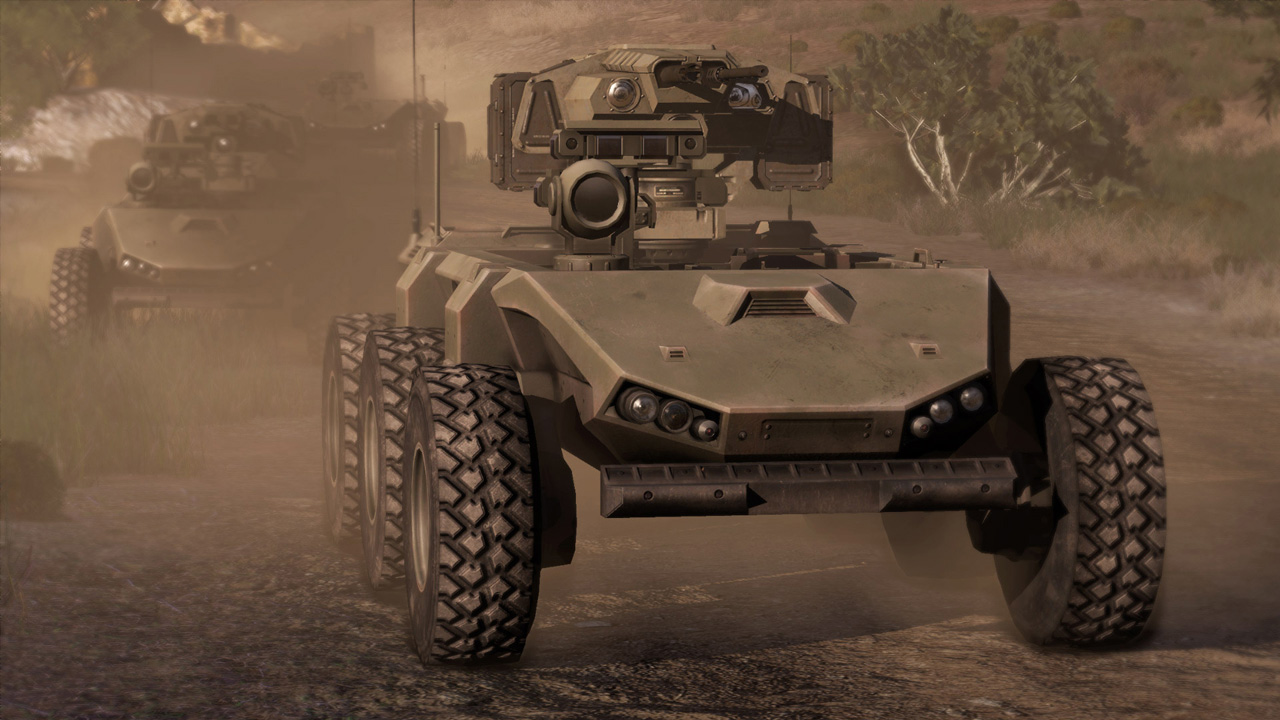 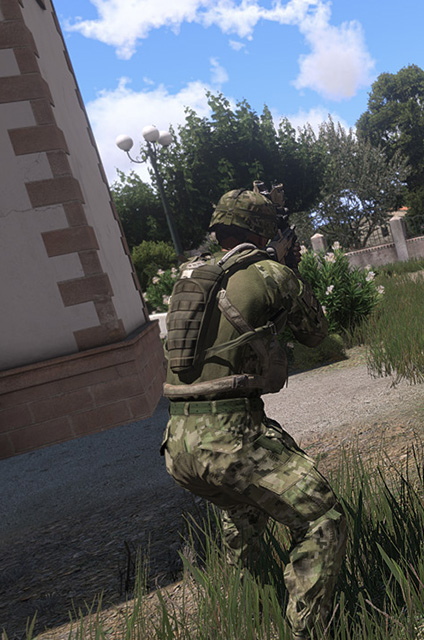 Next to the gaping hole where the campaign should have been, Bohemia Interactive has placed a set of showcase missions. These are largely the same missions that were available during the beta phase. And the alpha phase. Some of these missions feel like vertical slices that could have been presented to the press at conventions years ago. 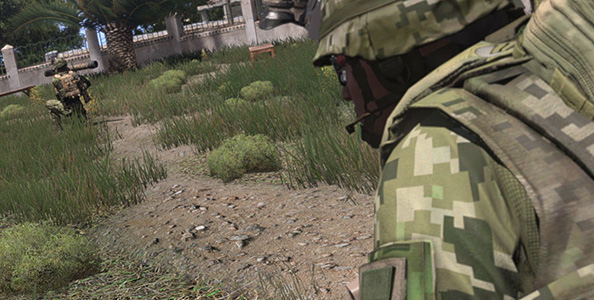 The showcase missions serve a function in showing off the game’s tech, at least. I was impressed by the lighting and particle effects, pleased to find that ground vehicles handled better than in past versions, and that the AI for allies and enemies has been beefed up. My roughly 2 year-old gaming PC ran Arma 3 successfully at very high settings, though not always at desirable framerates.

My puny mind however, with its limited processing capacity, was not able to divine how to fly attack helicopters without multiple trips to Bohemia Interactive's forums and out to YouTube for several fan-made tutorials.

That’s because the game that Bohemia Interactive is selling right now does nothing to effectively teach you how to play it. Help screens flash up during showcase missions so quickly that they’re nearly useless. There’s an in-game instruction manual of sorts, but it feels unfinished. Some of the commands — switching optics on the tank’s periscope, for example — are listed as "undefined." It was on me to go deep into the menu systems and assign a key to make them work.

Arma 3 ships with two fictional Greek islands, called Altis and Stratis. Together they add up to more than 290 square kilometers of hand made terrain. Add to that a full 24-hour lighting system and dynamic weather, and what you have is one of the largest military playgrounds ever conceived.

It is an artistic and a technical achievement, one that will only look more impressive as GPUs get better over time. I spent one entire evening just touring the larger island, Altis. There are salt flats and tidal basins, mountain ranges and deserts, bamboo forests and open scrub land, huge cities, heavily fortified military installations and futuristic solar farms. And that's without taking a submarine out to look under the sea.

The only thing missing in the scenarios I played were signs of civilian life. Most every door opens, but inside there's no furniture, no food and no toys. There's no one here to fight for, and that detracted from my experience. It gave the game world a ghostly feeling.

These showcase missions move unrelenting fast at times. The allied AI makes few attempts to let you catch up when you fall behind, and that leads to a vicious cycle of learning by dying. This made the glitches all the more frustrating. Small hiccups saw allied soldiers sucked inside rocks, or enemy AI who would lay on the ground as if to sun themselves while I carefully zeroed my rifle and walked rounds in on their head.

What I would call large errors ranged from the improbable (landing a jet upside down on a mountainside) to the incomprehensible (a low-speed collision of two tanks which catapulted them both 30 feet into the air) to the downright creepy (a seated infantryman lengthening his neck by a foot, T-1000 style).

Joining public multiplayer servers was a crapshoot, and there are no Bohemia Interactive servers to play on. The majority of my pick-up games were hosted peer-to-peer. Players looking for regular, stable experiences on hardware capable of hosting more than a few dozen players without serious performance issues are left on their own to roam the wilds of the internet searching for clans.

Where Arma 3 shines is when you have 6 or more players working with you in a multiplayer session. A set-piece cooperative mission called Escape from Stratis stands out. Here a NATO platoon of 10 is stranded somewhere on the massive, hand-made map. The goal is to find a boat or a helicopter and escape alive.

The few times I've been able to play it with a complement of 8-10 friends have been nothing short of incredible. Simply making it safely from one hilltop to the next has been exhilarating. How I know the game is succeeding is that it is teaching us how to operate as a cohesive fighting unit by forcing us to survive in a hostile environment.

Once while moving over open ground our platoon was pinned down by multiple enemy infantry formations. We formed a perimeter, called out coordinates and together returned fire and destroyed the enemies allowing us to move to better cover. While we were looting the corpses for ammunition an armored personnel carrier (APC) crested a hill. We hunkered down and gave covering fire while two players carefully brought anti-tank rounds to bear. Then we repaired the APC ourselves and drove off into the sunset.

Ballistics, armor thickness and flight profiles aside, what Arma 3 models best is teamwork.

Over the course of a week we've naturally begun to make our radio chatter more concise, allowing us to share vital information more quickly when we make contact with the enemy. A kind of leadership structure is developing, with some players happy to take orders while others make decisions. We are growing pilots and drivers, grenadiers and scouts. Our multiple play styles are turning into complementary roles, and who is online on a given night leads us to take on certain missions rather than others.

I'm willing to deal with Arma 3's huge flaws and archaic PC-gaming conventions because of the diversity of experiences it makes available. From multiple-launch rocket systems that can obliterate entire city blocks, to four-man mini subs, to tiny quadrocopter UAVs that can be carried into battle by one soldier and piloted by another, the number of toys in this box is staggering. It will take me months to master them all.

Our review of Arma 3 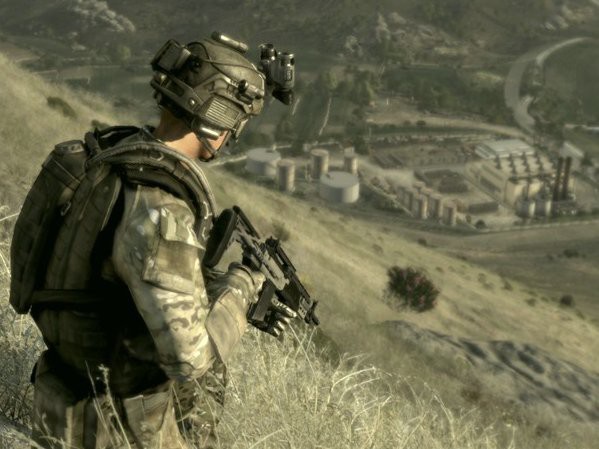 In the months since Arma 3's release, the team at Bohemia Interactive has rolled out many additions to the base game, chief among them a promised three-act single player campaign that is leaps and bounds better at helping new players into the game. After more than 300 hours with the game I can unflinchingly say this is the best first-person infantry simulation I have ever played. Emphasis on the word simulation.

Arma 3 is not an FPS, and every time it veers into standard FPS tropes like escort missions and gated objectives, it stumbles. At times, it takes a willing suspension of disbelief to out-think the game and divine what it is exactly the mission designers want you to do in order to advance the story.

There are brights spots, like the open-world objectives available in the second act. But these gameplay opportunities are hidden from the player, and the rewards carried over in the form of new weapons to outfit your troops with are difficult to manage. After a dozen hours rolling around solo gathering up sniper rifles and anti-tank weapons it was challenging to equip my squad with the ammunition needed to make them functional.

While many of the game's bugs have been squashed, friendly AI units still provide some frustration. They appear to be intelligent, but their pathfinding is suspect. The true failure here is that they're incredibly difficult to order around. The menu system for interacting with allies is neither fun nor intuitive. I would rather have had them not join me on most missions than deal with the clunky menus. A two-to-four-player cooperative multiplayer version of the single-player campaign could have alleviated these problems while introducing the potential of Arma 3's multiplayer modes.

Speaking of, that great multiplayer has been boosted by the Zeus module, a mode where a small group of players fight against an enemy force that is controlled by another player in real time.

Inspired by the role of a "game master" in a table-top role playing game, Zeus gives players control where before they had none. If a mission is proving too difficult or too obtuse to complete, the game master can simply change it on the fly. And if players are too overpowered, the game master can put more roadblocks in their way. This allows players to overcome the limitations to Arma 3's rigid mission scripting engine. It takes a bit of work to learn the ins and outs, but the results are amazing.

All these changes point to Bohemia Interactive's dedication to Arma 3 as a platform that they will be developing and improving in the years to come. I can confidently say that the game available now is finally a whole experience. It's not as stable or bug-free as other games, but the worst issues have been taken care of, and there's nothing else even close to the scale of Arma on the market today. With a sandbox this big and dense, Arma 3 could keep me busy for years.

Our review of Arma 3