The Stanley Parable review: the soul of wit

Share All sharing options for: The Stanley Parable review: the soul of wit

Review and information for The Stanley Parable (2013)

The Stanley Parable is the most hilarious ten minutes I've spent with a game all year.

I've actually spent more time than that — close to three hours — but each individual playthrough lasts no longer than 30 minutes. In its pursuit of that rare title of comedy game, The Stanley Parable joins Shakespeare's Polonius — the would-be jokester from Hamlet — in prizing brevity above all else.

The short running time is a positive force; in fact, in this case it's essential. Outside of the jokes, The Stanley Parable teaches players about the limits of linear game narratives by blowing up those limits. It tells you what to do but then allows you to break its own rules and change your path in a myriad of unexpected ways. It kept me guessing, and it kept me laughing.

The Stanley Parable tells the story of, well, Stanley — an everyman office drone whose mundane existence is interrupted one day when he discovers that all of his coworkers have mysteriously disappeared. As you take control of the protagonist and begin exploring the abandoned office building, a snarky British narrator (voiced by the wonderful Kevan Brighting) explains each of your decisions before you make them.

It was the first time I went opposite of the story that was being told to me, but it wouldn't be the last 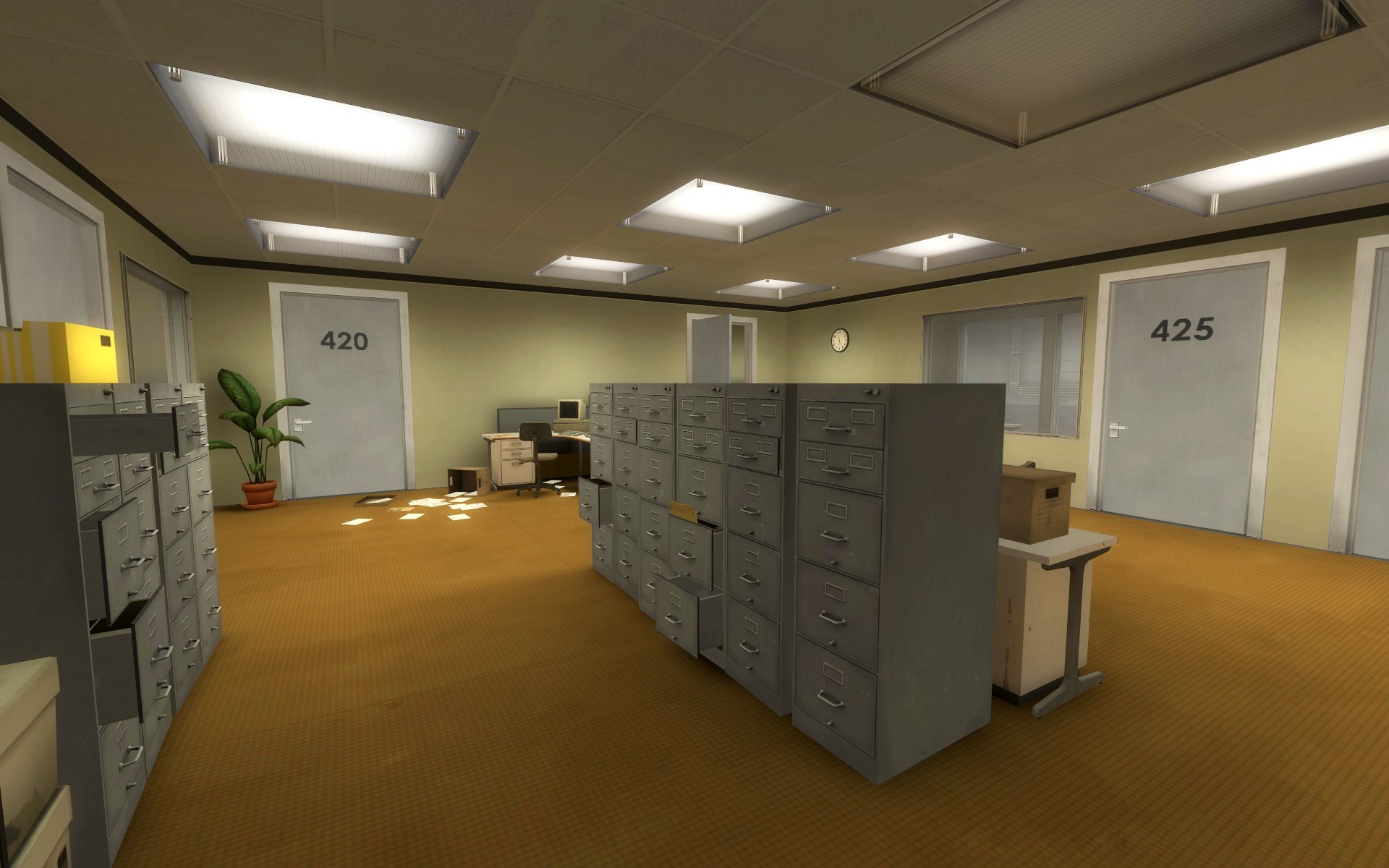 the end is never the end

You may have heard of The Stanley Parable before — or even played it in a different form. The Stanley Parable was first released in 2011 as a Half-Life 2 mod. This new release follows the same basic format but it's well worth revisiting. The assets are totally redone and look great, dialogue has been re-recorded and added to, and new paths and endings wait around every corner.

Before long, I realized that I didn't need to follow along with the narrator. Stanley comes to a room with two doors in front of him. The narrator says, "Stanley entered the door on the left." At this point, my exploration and rebellion instincts kicked in at the same time, and I bolted for the door on the right. It was the first time I went opposite of the story that was being told to me, but it wouldn't be the last.

With each disobeyed order, The Stanley Parable's narrator becomes increasingly annoyed and unhinged from the game's fragile reality. The narrator is self-aware that this is a video game and that there are limits to what you can do and what he — as the storyteller — can offer. The never-ending conflict with game narratives as a whole is written clear and obvious here: Do you have control or does the designer? Thoughtful observations and musings on this topic are hidden amidst the humor.

But comedy remains the point. As the narrator chides you for straying from his predetermined path, he tosses out sharp zingers about Stanley's life, his inability to follow orders and more. Go down one path, and he might give up and restart the game (with glitchy results). Another leads to the indie game equivalent of a behind-the-scenes documentary. I never knew what to expect, which made me want to replay the game over and over to try new paths.

The short length also serves those replays. Stanley moves through the game's warm environments quickly, and even with the furthest branches, it never takes longer than five minutes to blast through a portion of the game you've already witnessed. Any annoyance from hearing the same bits of dialogue disappears thanks to the wild imagination on display in each new segment.

Once you've explored all of its paths and heard all of the jokes, The Stanley Parable doesn't provide much reason to return. A lack of mechanics keeps replay minimal, but it also keeps the game focused. It doesn't have collectibles or combat to master, but that traditional structure would detract from what's so special about The Stanley Parable. This is a game about storytelling, so it's fitting that the only gameplay revolves around figuring out new ways of twisting that story.

Like the best comedians, The Stanley Parable is both hilarious and insightful. It respects quick, cutting observations over a padded experience that would be deemed more valuable by some. For a small commitment in terms of time and money, it delivers a ton of laughs and just enough thought-provoking commentary on the nature of narrative in games. Getting everything you need out of a game in a few hours might just be the ideal format for comedy.The Stanley Parable was reviewed using a final Steam download code provided by Galactic Cafe. You can find out additional information about Polygon's ethics policy here.

Our review of The Stanley Parable (2013) 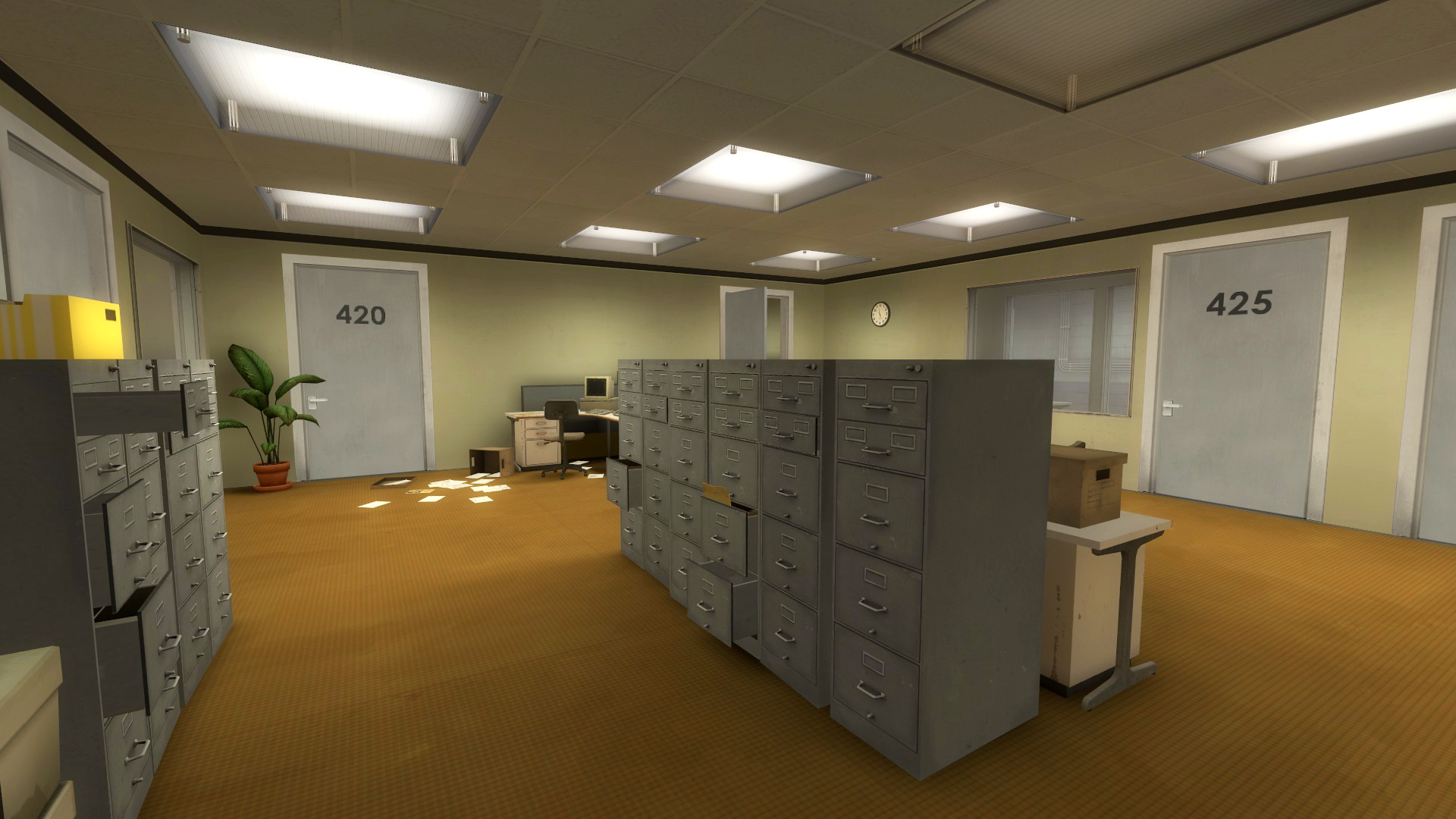