Its imagination is impressive, but Sonic: Lost World can't even nail the basics

Sonic: Lost World for 3DS is the slowest Sonic game I have ever played.

That doesn't need to be a bad thing. The Sonic series has struggled with its reliance on speed for ages — while the best parts of many Sonic games eschew control for momentum on a pre-set path, sometimes the titular hedgehog runs so quickly you can't see what's coming. Slowing things down, Sonic: Lost World had the opportunity to tackle this issue head-on.

Instead Lost World takes its more relaxed pace to ridiculous extreme, turning the "blue blur" into a sluggish nightmare. Sonic's new outing attempts to expand the series in an ambitious direction, but its bad level design and unending stream of poorly-explained mechanics stop any noble efforts before they can pick up steam.

Though its levels are completely different, Sonic: Lost World on 3DS follows the same plot path as its console brother. The cutscenes are chopped down and compressed, so whatever light-hearted story exists here is difficult to follow. From what I was able to figure out, Sonic's main antagonist, Dr. Eggman, has joined forces with a team of colorful bad guys known as the Deadly Six. This leads the hero and his partner Tails to a strange world where landmasses float free from the ground and gravity can change your orientation after a well-placed jump.

the levels get more challenging — but in less satisfying ways

Other 3D platformers have used this trick; leaping between tiny landmasses presents a functional, geographical method of breaking up gameplay and changing goals within a level. For the first five or six levels, Sonic: Lost World puts this structure to good use. A slower, platforming-heavy sequence gives way to an on-rail running sequence gives way to a closed-off arena full of enemies and so on. It's a lot of variety, and it shows off the many different masks Sonic has worn over the years. 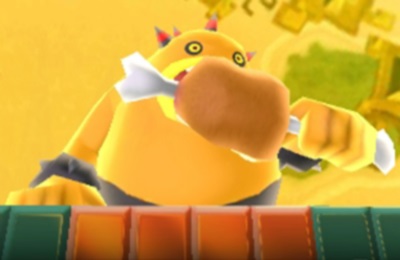 As Lost World progresses, the levels get more challenging — but in less satisfying ways. By the fourth world, many segments felt like awkward puzzles that forced me to figure out how to trigger a route to the next sequence. Did I need to destroy a set number of enemies? Hit a specific switch? Run along the wall in hopes that an invisible platform was just out of sight? Sometimes the game is forthcoming about the objective, and other times I spent ten minutes or longer in a single area, mulling around and trying to figure out how to move forward.

The game acknowledges that it could take a while to progress, too; many levels open with a time limit of 20 minutes or more, which must seem like blasphemy to old-school Sonic fans. Even with that much time, I still ran out more than once. Lost World's levels are confusing and labyrinthine, and they stretch on for what seems like ages in platformer time. Even when I finally figured out the right path through a level, as often as not the execution wasn't much fun.

For one interminably long stretch, I had to roll around snowballs until they were big enough to activate hidden switches. It was a boring enough activity on its own, and was made worse when the game added in a snowman enemy who would chase me and absorb my snowball, erasing any progress I made. This kind of tedium drained the enthusiasm I built up during Lost World's imaginative early levels.

The game's primary mechanics caused me plenty of trouble as well. As has been the case since Sonic first went 3D, combat is based around locking onto enemies and then performing a homing attack. In Lost World, most enemies have two configurations: one in which Sonic can kill them and one in which he'll take damage if he attacks. It's neither easy nor entertaining figuring out these patterns, and it killed my momentum constantly. The problems with combat go all the way down to the level of button layout. 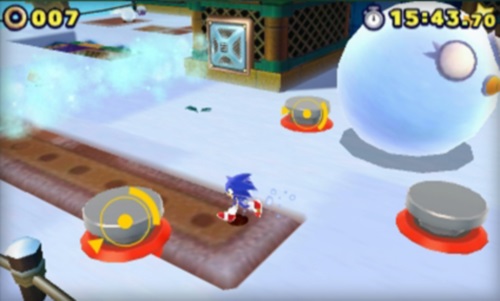 Sonic is meant to throw enemies off balance with a ranged ability before using his homing attack, but that ranged power uses the same two buttons as bouncing Sonic to gain more air. Likewise, jumping is shared by two buttons. I lost count of the number of times I tapped "x" hoping to stun an enemy and didn't manage anything worthwhile.

Sonic: Lost World's sloppy and inconsiderate execution hits its apex during the game's terrible boss fights. Rather than testing skills learned through each level, most boss battles introduce tweaks that aren't broken down for the player. It's always annoying, but this kind of arbitrary design actually forced me to give up on the final boss. A single tutorial tip didn't explain why I couldn't use my homing attack — even when targets appeared on the boss. After 20 minutes of trying to figure it out, I turned off the 3DS and didn't give a second thought to turning it back on.

Its imagination is impressive, but Sonic: Lost World can't even nail the basics

Sonic: Lost World doesn't respect its past or its potential for change. But worse, it disrespects the players it depends upon. Lost World's variety and ideas are impressive, but when I can't depend on running, jumping and hopping on enemies to work, each new wrinkle added on top of that just feels like a chore. I'd much rather have the clumsy adrenaline rush of Sonic's past over this awkward, lethargic present.