How Scale strives for Zelda-like exploration, not just clever puzzles

Share All sharing options for: How Scale strives for Zelda-like exploration, not just clever puzzles

On paper, Scale's mechanic sounds simple to master: You can make objects bigger, or you can make them smaller.

You can probably envision how a clever level designer might whip up a few puzzles using this scheme. A button requires an object of a certain weight to be placed upon it for a goal to be achieved — put something on the button, blow it up, and presto. A door is too small for your human frame to fit through — blow it on up, and move right along. A platform hovers just out of reach — make a staircase out of a patch of flowers on the ground, and you're good to go.

Scale starts with puzzles like these to introduce you to the mechanics, but right when you start to feel like a MENSA-level super genius, the game pulls the rug out from under you — necessary items are nested inside of other objects, forcing you to dig through layers of expanding boxes to find them. Entrances into solution rooms are microscopic, requiring you blow up the entire world around you to squeeze into them. Pieces of background scenery — butterflies flapping in the distance, for example — become vital means of transport.

"...is it reasonable, or even possible to make a real game out of this?"

The game explores its titular concept more thoroughly than any game has ever attempted — and there's probably a good reason for that. Steve Swink, the creator of the game and founder of development studio Cube Heart, actually came up with the complex design of Scale a couple of years ago, and has been showing prototypes at events ever since. Getting the game beyond that prototype stage has been a tremendously difficult process.

"I made a prototype at TIGJam a couple of years ago, and everybody really liked it, and thought it was really cool, but of course, the technology was really challenging. It was really easy to get a prototype up and running, but then physics engines don't really like it when you dynamically scale objects, so from that point it was, 'Okay, is it reasonable, or even possible to make a real game out of this?' I had to recode the whole thing from scratch, with the eye of making it a real product, something I could release that people could play without everything exploding all the time." 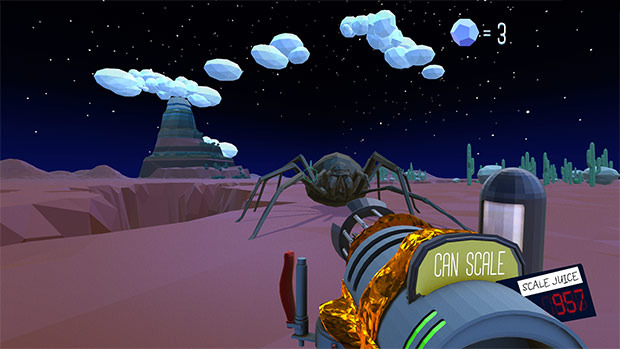 Swink explained, in as layman-friendly terms as possible, that of the three forms of motion in games — rotation, transform (a jargon term for movement in 3D space) and scale — most game physics engines only understand how to apply their logic to the first two. By building a game based around scale, Swink (with the help of Osmos programmer Eddy Boxerman and other members of the Cube Heart team) would have to figure out how to make objects impact other objects in the environment while the player dynamically increased and decreased their size.

They found that solution, allowing them to explore new puzzle schemes for the core scaling mechanic. By standing on top of an object and expanding its size, the player can launch themselves high into the air by bringing the object's expansion to a dead stop. By blowing up an object next to another object, players can remotely push things around the environment.

The possibilities for cleverness are endless in Scale, but Swink wants to avoid relying only on outsmarting the game's players.

"I'm interested in exploring a lot of the implications of the Scale Gun, but my goal in doing that is not to just make a bunch of clever puzzles and show you how clever I am as a designer," Swink said. "My goal in doing that is to provide that sense of wonder and exploration and discovery that you get from, like — when you play Zelda: Ocarina of Time, and you get turned loose in the overworld, and you have all these cool tools like the Hookshot and the bombs, and it's just like, 'Fuck this main quest, I'm gonna go find stuff, and look for secrets, and discover hidden things.' That's the taste that I'm going for with this."

That sense of exploration, and finding context in Scale's larger world will help the title be a bigger experience than just a first-person puzzle game. Swink pointed to Antichamber — a title developed by Alexander Bruce, one of Swink's close friends and colleagues — as an example of a game that extends beyond its core puzzle facet. Bruce's game is less about its core mechanics, and more about how the game procedurally educates the player as they explore the world at their own pace, teaching them with taunting lessons along the way.

There isn't really a "Puzzle Gun" genre, Swink said; but there is a gradient of how much singular focus games spend on their core, unique puzzle mechanics.

"...my interest in this game doesn't really have anything to do with making challenging puzzles, really."

"I would relate things like Braid, and Portal, and The Swapper and Q.U.B.E. — all of those are kind of in the same family, but Antichamber is something different," Swink said. "And I think Scale's actually something different, too, and I think when people look at it, they see the Scale Gun and say, 'Oh, it's like Portal, but you scale stuff.' But my interest in this game doesn't really have anything to do with making challenging puzzles, really."

Swink's hopes for the game, on top of its core design challenges, make it a fairly ambitious endeavor; the kind that Swink is all too familiar with. His last project was of a similar ilk to his current game: A puzzle-platformer called Shadow Physics, in which players controlled a silhouette of their protagonist projected on a wall. By moving lights in the foreground, players could cast shadows into the level, giving their hero objects to move around on in order to complete objectives. 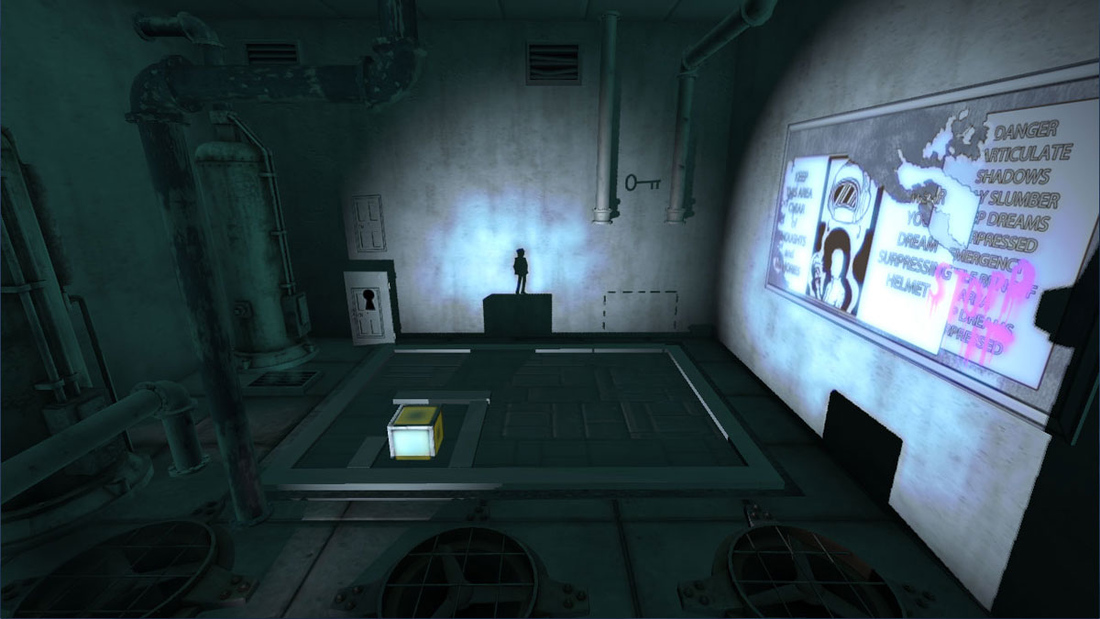 Like Scale, it had its own design challenges, which Swink's collaborator, programmer Scott Anderson, attempted to overcome with an engine he created from scratch. The duo started on the project in earnest in Sept. 2008, but called it quits before the game was finished.

"I seem to have a regrettable instinct for concept that get people really excited, but then end up having really challenging technical problems," Swink laughed. "Scott had made this custom engine, and these tools, and the editor, and we're banging away on it, banging away on it, and we got two and a half years in and said, 'This is not ... a good game. We need to stop now.' It was at the point where we'd burned through our funding, and we didn't want to get more funding for this, this is a terrible idea. It would be another three years, and we don't even think it would be a good game, probably, because of the core design and technology problems."

"Whether or not I get the funding, I'm going to keep working on the game."

With Scale, Swink has turned to familiar waters to get the game done: The Unity development platform, which he's been using since its early, far less accessible iterations. He's put himself through an intensive training course for C#, letting him fill the role of lead programmer for the very first time. He's found more satisfaction in Scale's quickly developed prototype than he ever found in the years he worked on Shadow Physics.

He's comfortable with his workflow — and he's ready to get Scale done, no matter what.

"When people ask me when I'm going to release it, I just say, 'When it's good,'" Swink said. "But I have a very clear scope of what I want to build; I know how many worlds there are, and approximately how many levels, and I have sketches for a lot of the content for the later stuff.

"Whether or not I get the funding, I'm going to keep working on the game," he added. "It's just, the funding would cause me not to have to get contract work and get distracted from the game for a month or two, which would be really nice. But yeah, the game's gonna get done, regardless."

Cube Heart is seeking $87,700 to fund Scale. You can support the studio's endeavor on Kickstarter.