Opinion: The pleasure of being an adult and playing with toys

Share All sharing options for: Opinion: The pleasure of being an adult and playing with toys

So there I was, a grown man standing in the aisle at Toys R Us, like I'd done every week or so that winter.

I didn't have a kid with me, but the staff didn't stare. I was in the aisle outside the video game area, looking at the Skylanders collection, checking for rare figures. Some of the Skylanders — a collection of physical toys that interact with a video game series of the same name — are harder to find than others, and the scarcity hooked me, and made me ruthless.

One time I snatched a Wrecking Ball away from a 4-year-old before he even had a chance to reach for it; would this be one of those days? I was swinging through around noon, when I landed my best find ever: a Ninjini, the purple, vaguely Christina Hendricks-like genie/ninja that was one of the scarcest figures in the series. They had one left, and as I plucked it off the hook a week before my kid's eighth birthday, I had one thought: I am the dad of the year.

The magic of Skylanders, so we're told, is that you can buy a plastic toy figure, drop it on the Portal of Power — a peripheral that plugs into your video game console — and see character come to life on your television. That's the appeal for kids, but for adults, it works the opposite way: The game on the TV gives us an excuse to play with toys. I gave up my action figures when I was about 9 or 10. I stuffed them away somewhere, attempting to meet the cruel social expectations of the third grade.

A couple years later, I pulled them out again, and everything had changed. I broke out the spaceships and tried to make up stories with the figures, and I waved the little pieces of plastic around. Nothing happened; they were dead in my hands. I couldn't "play" anymore. I didn't miss the feeling, but I was surprised by how completely it had vanished.

I don't play with Skylanders toys the way I played with toys as a kid. But they fascinate me, and that hasn't happened in years.

Now, you could argue that the toys are fun because the games bring them to life. But actually, the games work so well because they ask so little of the toys. Consider the role each Skylander plays in the game. The figures are organized into eight different clans, and they have an array of attacks and abilities. So you might think that in gameplay, they take on different roles: Some are more like tanks, others are support characters, a few are tricky to play but powerful if you know what you're doing. You'd expect their eight clans to play a big part in how you use them: Maybe the earth characters are decisively better at defense, while the fire characters have boffo area-of-effect attacks. Even Pokémon, who chase the same demographic, have resistances and vulnerabilities that affect how you use them. 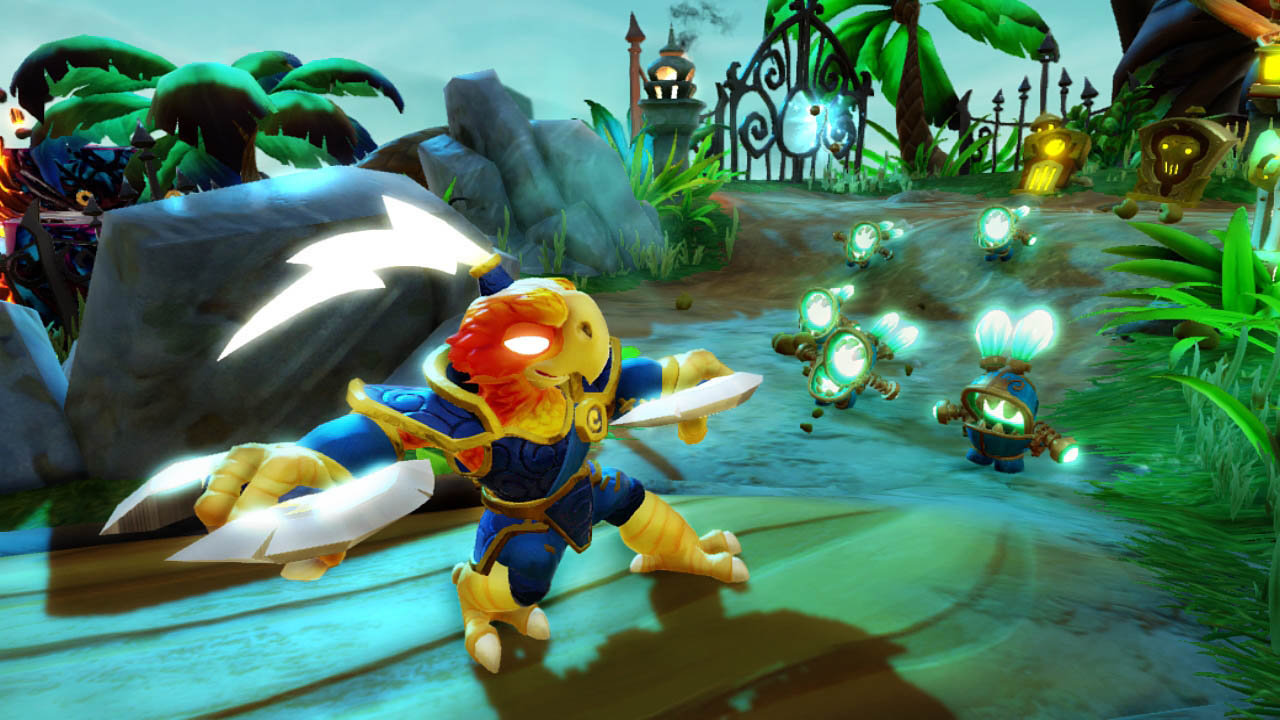 But Skylanders doesn't do that. Sure, the in-game characters have stats and some of them are better at things than others, but all the characters play basically the same role: They all have to be able to fight their way through the game, without the support of another figure, from start to finish. (Of course, if you want to see everything the game has to offer, collecting the other figure is a must — a trick that's helped publisher Activision pull millions of dollars out of its hat.)

What matters about the Skylanders is not how they play, but how they look. Their surface qualities are important because that's what they share with the toy; those invisible numbers that would matter so much in say, Shin Megami Tensei 4, don't matter here, because they aren't reflected in the toy.

If you choose to play Wash Buckler, a grumpy pirate squid, you'll use his squishy rolling tentacle attack because it looks awesome, not because it's deadlier than, say, the way Eye Brawl can detach his giant eyeball head from his neck and make it shoot lasers at everyone. In fact, I seem to recall the flying eyeball laser thing is kind of underpowered, but who cares? It looks amazing.

What matters about Skylanders is how they look

There may be more tactical players than myself, but for me, the entire joy of playing the game lies in watching the characters do their thing. Like Hex, who can summon a wall of bones, or Sprocket, who rides around in a tank that poops land mines; Swarm, the giant bee guy, walks with a swagger that's almost arrogant; Eye Brawl, a dude with a giant eye for a head, has weird proportions and lines on his back that remind me of a horseshoe crab; when Drobot flies, he mimics the Starship Enterprise; Thumpback the whale is painfully slow, but has an awesomely sloppy belly flop. While a few of the toys seem redundant — there are a couple too many dragons — they all show inspiration and care.

Childish play is only fun for children; the way we create as adults is less sweet, and more satisfying. But Skylanders takes me halfway back to that time. I can forget about stats and buffs and weaknesses, and just pick up a toy and imagine what would happen if it came to life.

Who are the Bene Gesserit of Dune?

Dune’s weird little lip tattoo, and what it means

An indie game finally gave me something Halo never did

A deep dive into the characters, story, and world of Frank Herbert’s classic sci-fi novel