Unhindered by movie licenses or the restrictions put in place for other superhero games, Lego Marvel Super Heroes brings together virtually every character with any appreciable fan base from the Marvel Comics universe — be they Avengers, X-Men, Fantastic Four or other. But the game is held up by more than just a huge cast of heroes and villains.

Lego Marvel Super Heroes sports big action and visual gags for the kids alongside sharp, reference-filled writing for adults. It's constantly winking at players, but it never uses its source material to hide shortcuts or shortfalls. This is a Marvel fan's dream game.

Lego Marvel Super Heroes begins on a cosmic scale: The Silver Surfer zooms past stars, searching for a planet-sized meal for his master Galactus. When the Surfer inadvertently crash lands on Earth, destroying his space-faring surfboard in the process, it kicks off an international incident. The Avengers and S.H.I.E.L.D. want to collect the pieces of the board to fix it and stop Galactus, while villains such as Dr. Doom and Loki team up and hunt pieces down for their own nefarious plans.

The plot is broad and world-threatening enough to draw in a wide range of heroes and villains from Marvel's 60-plus-year comic book history. It also provides a good excuse for a lot of globetrotting. The game centers in an open-world New York City, but individual levels take you on tours of classic Marvel locales from Stark Tower to Asteroid M. 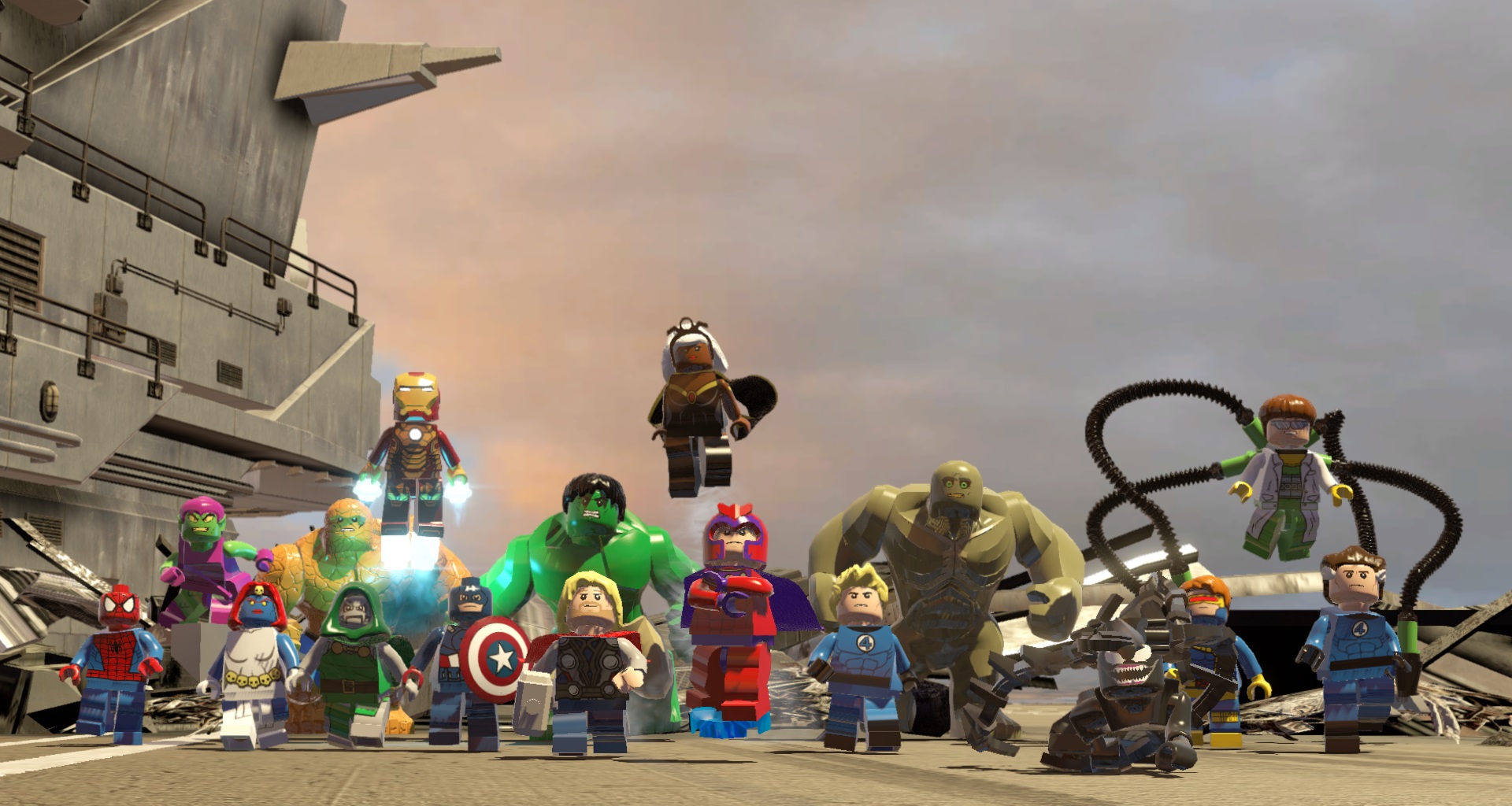 In trying to fit as many bad guys as possible into the game, Lego Marvel Super Heroes hits one unfortunate snag: Almost every location eventually turns into a similar "hidden enemy base." As a long-time comic reader, I can appreciate the important sociological differences between secret bad guy organization AIM and secret bad guy organization Hydra. But their hideouts blend together into a Lego-filled mess of science equipment and big metal doors.

Within those sometimes generic settings, you fight hordes of enemies and solve familiar but pleasant puzzles. Button-mashing is pretty much the only combat option, but it's been smoothed out, making it easier to leap from enemy to enemy. The game also encourages swift movement between targets; as Lego foes burst apart in quick succession, you build up a combo meter, allowing you to exponentially increase the number of Lego studs you pick up. Lego studs are spent to purchase new characters, who you can then use to collect more studs, and so on. It weaves a tight, satisfying pattern.

Fights are entertaining in short bursts, but the Lego games' ubiquitous environmental puzzles steal the show. You have access to up to four different heroes on your first run through each level. On subsequent runs you can turn on "Free Play" to switch to any character you've unlocked, and each hero has different powers at their disposal. To remove a huge piece of rubble, you'll want to call up a massive, extra-strong character like The Hulk or The Thing. Fires can be put out by Iceman or Storm or even an industrious, shielded Captain America. The sheer number of playable heroes and villains enables more types of problems and more crazy powers to solve them than in any previous Lego game.

Even if multiple characters might be able to handle a certain hazard, each level has a set path through a specific group of puzzles. I never struggled to figure out what I was supposed to do next — the puzzles have to be solvable by kids, after all. But the easiness didn't matter; I was always wide-eyed during my time with Lego Marvel Super Heroes, always eager to see how shooting a blockade with Cyclops' eye lasers would change the road forward, or what strange shape Mr. Fantastic would bend himself into to pry open a box. It reminded me of daydreaming about superheroes as a child, except now I could see my imagination played out on the screen. 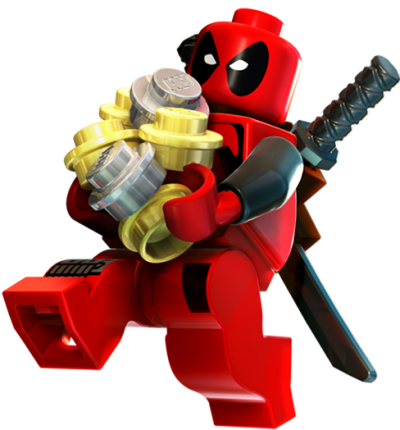 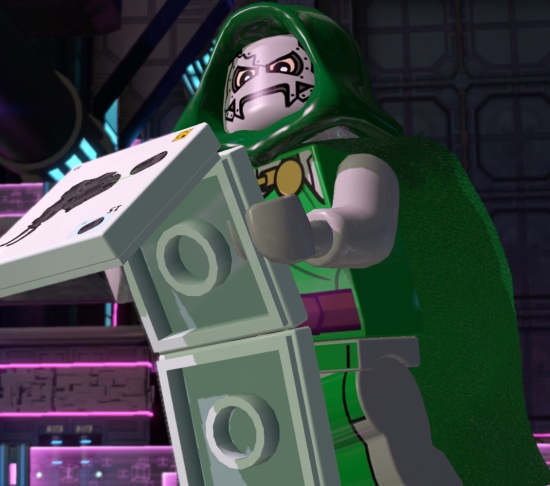 If you've watched any Marvel film in the last ten years, it's easy to like these characters

Lego Marvel Super Heroes appealed to my inner child, but it appealed to my inner comic book nerd even more. From offhand remarks about 20-year-old story arcs to the inclusion of some truly obscure characters, every inch of the game is packed with Marvel history and callbacks. Heck, even Stan Lee pops up once every level in Lego Marvel Super Heroes, waiting to be rescued. That "collectible" pays respect to one of the people whose creations made this game possible, and it's part of a celebratory attitude that washes over the whole game.

More recent Marvel fans will still be able to find some clever nods as well, thanks in large part to the game's witty script. Aside from the excellent Clark Gregg as Agent Coulson, Lego Marvel Super Heroes doesn't share the acting talent from any Marvel movies, but Traveller's Tales has clearly gone out of its way to find voice actors who sound familiar. More than that, the heroes' attitudes in the game are shaped from the films: Iron Man is a carefree playboy; Spider-Man is a neurotic high-school student; Professor X and Magneto are old friends whose interactions have just a tinge of Shakespearian talent.

If you've watched any Marvel-based superhero films in the last ten years, it's easy to fall into liking the characters as they're presented here. And even if you didn't, you might get a few kicks out of the game's constant references to Samuel L. Jackson's previous roles before becoming Nick Fury, or random New Yorkers who screw up your name as you pass by — "Look, it's that guy... Metal Man!"

I spent a lot of time with those confused citizens. You return to New York City after every level and are free to explore to your heart's content. The city is gigantic — it easily took me ten-plus minutes to circle it without stop-offs at various islands or S.H.I.E.L.D.'s massive helicarrier — and it's full of activities. You can jump in a vehicle and race other heroes, perform small tasks to uncover gold bricks that open bonus levels, hunt down new characters to unlock and more. Finishing the story placed me at a mere 20% completion, and the abundance of stuff in Lego Marvel's New York City has provided me plenty of incentive to keep that number climbing well after the credits rolled.

Traveller's Tales has embraced their love of superheroes and used it to build an imaginative, expansive game. Anyone could enjoy Lego Marvel Super Heroes' tightly-designed systems and colorful world, but for someone who grew up reading The Avengers â or is growing up watching them now â it offers something I never thought I'd see: a virtual recreation of a huge swath of the Marvel Universe in all its sensational, astonishing and uncanny glory.