The Stanley Parable update in the works to remove offensive images

Share All sharing options for: The Stanley Parable update in the works to remove offensive images

Developer Galactic Cafe will release an update to adventure game The Stanley Parable in order to alter a pair of images some players found offensive — specifically, images of a character in an instructional video setting a young child on fire.

In one section of the game, players can watch an instructional video on "Choice," which consists of a slideshow and narration. Players are shown a character named Steven who is presented with two choices: "He could spend years helping improve the life of citizens of impoverished third-world nations," the game explains, a choice represented by Steven lighting a cigarette for a young boy wearing tattered shorts, "or he could systematically set fire to every orphan living in a 30 kilometer radius of his house," at which point Steven is shown setting the same child, now soaked in gasoline, on fire.

Oliver Campbell, an author of fiction and editorial, said he was presented with the Choice instructional video during one of his "off the beaten path" playthroughs of The Stanley Parable and found it racist. He then reached out to The Stanley Parable creator Davey Wreden to voice his concerns.

Wreden says he plans to update the game to change the sequence, hopefully in the coming weeks. 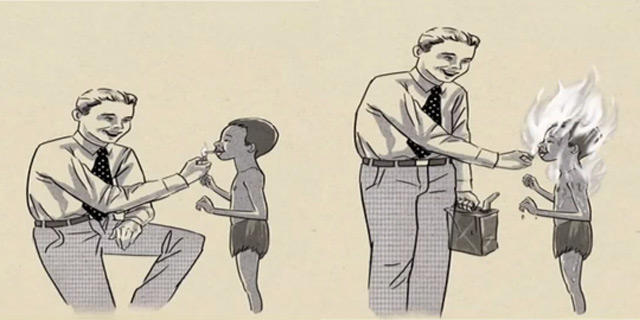 "I received two separate complaints today from people who found that the images made them significantly uncomfortable," Wreden said in an email to Polygon, "and in one case made a teacher feel unable to share the game with her young students.

"It's actually really tough to respond to complaints about someone being offended, but I think I would be able to change the actual images without having to go to too much trouble (though the dialogue in that section would be very difficult to change)."

In a separate email, Campbell told Polygon his exchange with Wreden was "actually pretty pleasant."

"It took a bit of explanation," Campbell said, "but he did understand the nature of my complaint, and I offered ways of fixing this without destroying the joke or a prohibitively expensive additional amount of work. He explained that he didn't quite understand, but was more than willing to listen, and that it's very hard for a creative to figure out which player requests to pay attention to."

Wreden said the complaints caught him off guard. "Obviously these things are always 20/20 hindsight," he said, "but at the time it seemed too cartoony to identify as problematic."

"I'm not exactly married to the visual gag there," Wreden said. "It doesn't make or break anything about that particular section, and we always wanted the game to be something that could be played by anyone of any age. If a person would feel less comfortable showing the game to their children then I've got no problem helping fix that! It's really as simple as that."

"I don't think that Davey Wreden is a bad person at all, or that he ever intended what he put in there to come off as racist," Campbell said. "Sometimes we just accidentally do stuff like that without thinking far enough ahead to see what the potential results are. I think the important thing here is that Davey was open, receptive, completely not hostile about what I perceived to be in very poor taste, and we came to a very satisfactory compromise."