"Meow," says Shigeru Miyamoto. "Meow." He forms his hands into claws and performs a slow cat-scraping motion. To his left and to his right sit the esteemed producer and the director of Super Mario 3D World. "Meow," they both say, before also demonstrating the clawing feline action.

I am sitting in a meeting room in Nintendo's humdrum HQ in Redwood CIty, seated around a table alongside various reporters and PR folk. Miyamoto is in Nintendo's equally humdrum HQ in Kyoto, communing with us via a video link. He (center), Yoshiaki Koizumi (left) and Kenta Motokura (right) are seated facing us at a table, talking to the camera like three prosecutors in an international human rights tribunal. Except with Nintendo plushies piled up on the table and cat impersonations.

After they are done talking in Japanese, after the translation comes through, the cat thing becomes clear. "Everybody loves cats," said Miyamoto. "We are proud of the Mario cat suit. The reason that we decided to incorporate the cat transformation is not just that it is cute, but when you incorporate 2D and 3D you need a certain element of freedom and we felt that the cat item could pull these elements together."

In Super Mario 3D World there are a dizzying array of power-ups, boosts, moves and tricks at the player's disposal. The cat-suit allows the player, be they Mario, Luigi, Peach or Toad, to climb straight up walls. This is a useful skill in a platform game, particularly one designed by Nintendo, the global master of platform games.

"People think about the classic gameplay of Mario being about timing and jumping on things," said Miyamoto. "But we started to think about it in slightly different way, that allows you to climb up walls."

Cat-suits can also be used to claw at enemies and finish them off. Miyamoto shows us how this works.

Their pitch is very jolly and lots of fun. Miyamoto is a man who looks perpetually amused at the world, who is able and willing to laugh at himself. His subordinates look like they are happy to be seated next him, talking about platform games.

It should not, however, be supposed that this is anything other than a serious occasion. Nintendo's Wii U, by any useful measurement, has sold poorly. The tablet controller is confusing to customers. The lack of big games is frustrating to fans. Super Mario 3D World is a major opportunity for Nintendo to rescue its own fortunes in the console business. Miyamoto is here to sell.

We journalists are treated to an hour-long four-player playthrough of the game, to feel its joyous, merry fun. It is everything that is good about Nintendo, a universal, uncomplicated romp that touches on our human desire not merely to kill time or reach the end of a level, but to compete and cooperate in a spirit of fellowship.

Miyamoto's genius has not merely been about designing characters or levels. It is about understanding the fundamentals of people and how they play.

This being Nintendo, the message we are here to receive has been prepared with care. "We've taken the elements from 2D Mario games, where you understand what the goal is and there is a certain simplicity there and put that together with the ability to explore in a 3D world," he said.

So Super Mario 3D World is for everyone, young, old experienced, novice, 2D speed-player, 3D languid explorer. Koizumi and Motokura have followed their leader's desire to pull together all that was great about the 2D Marios of the 1980s and the 3D Marios of later years, and make use of modern conveniences like HD graphics and social media. 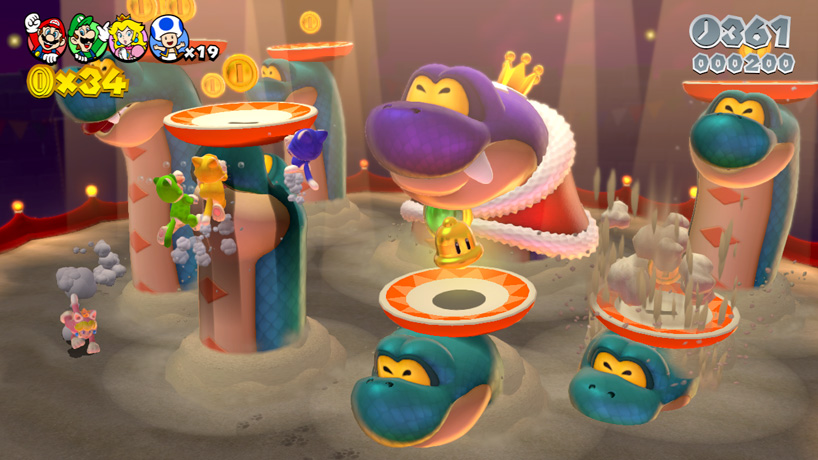 Of course the game harks back to a simpler age with a roster of playable and non-playable characters that, both individually and collectively, hurrah Nintendo with their entire being.

At the same time there are innovations like the cat-suit, like collectable stamps that can be collected, modified and shared, like transparent pipes that are used in gameplay, not just as transportation devices. Most important of all, the ability for four people to explore and play the game, in 3D, all at the same time.

This is no small trick, even for Nintendo. During my test session, there were players of wildly differing skill levels. It was OK for me to be roundly beaten by the young chap from Joystiq on those levels where competition is paramount, the contest to collect as many coins and boosts and power-ups as possible before gaining a massive bonus by being the first to reach the end flagpole. But when we needed to play cooperatively to reach the end, it became way more challenging to balance my lack of skill, with the desire for the group to complete the mission and score well.

This has been the Nintendo way, the recognition that people have always played Mario games together, just not always at the same time on screen.

"Every player is trying to reach a goal," said Motokura. "We are looking for a sense of working together to reach that goal. People want to see their own results and they may get a little bit competitive as a result, but we are looking to facilitate a lot of different styles of gameplay whether it's competitive or not." 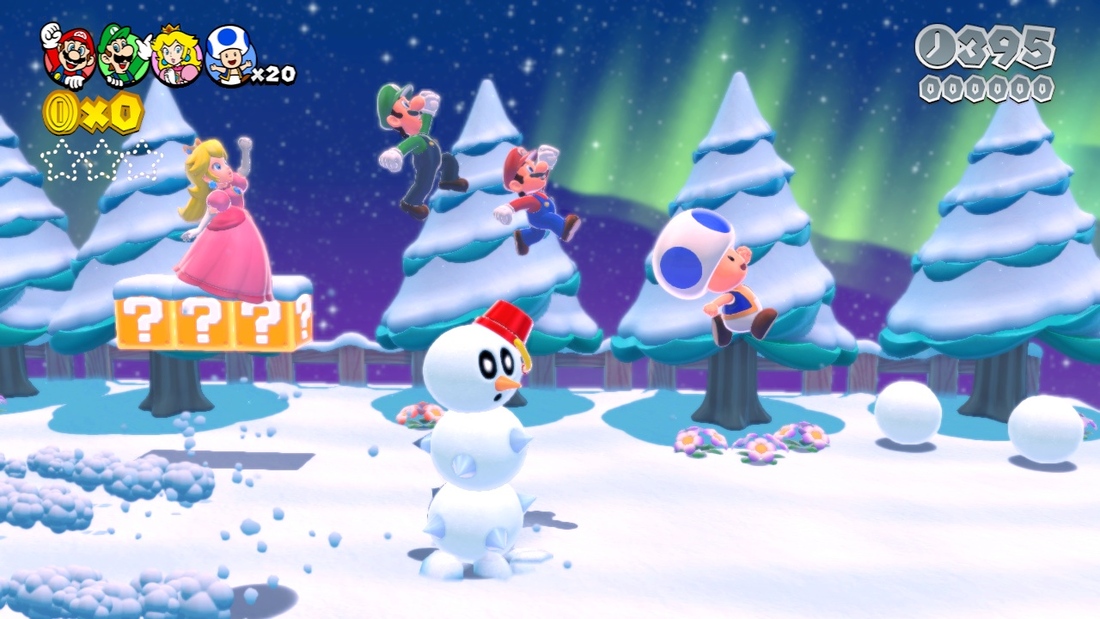 There is something else that is new about Super Mario 3D World. Princess Peach is playable and given an active role. Each character has its own powers, Toad is fast, Luigi jumps high, Mario is rounded, Peach uses her skirts to float in the air. She is the 'beginners' character.

"It has been a really long time since Peach was playable in a Mario game, and we're really happy to have her back here," said Miyamoto.

I use my one permitted question to the panel to ask if any of the characters, most especially Peach, who has come to represent the tired notion of damsel in distress, have been specifically evolved in the design of this game.

Miyamoto said that each character would appeal to a different type of player. "Toad is good for people who like speed-runs," he said. Motokura addressed the specific of Peach. "Because this game is for a broad audience we try not to focus too much on individual storylines," he said. "But I am happy to say that because Peach is part of the adventure she has slightly different role. She is much more involved and active that she has been in the past, perhaps."

Not exactly a deep answer, but a very Nintendo answer. Many of the replies to questions end in the formula that "we hope that everyone will enjoy this," a blandishment, but also a central tenet to the Nintendo faith.

Because, make no mistake, Nintendo is a cult. I do not say this unkindly. It is a cult that has given the world much entertainment and happiness in return for unimaginable riches. But it is a tightly controlled organization that sticks rigidly to its principles, and to its script.

If you walk through any game industry office you'll see lots of that firm's icons in posters and statues and toys. But you'll also see a variety of other stuff too. At Nintendo, there is only Nintendo on display, everywhere, with an intense devotion that cannot be faked. I have a strong suspicion that this is entirely voluntary and organic by the staff. You only get to be a part of this if you are already an adherent.

Nintendo is not the sort of company that rolls out execs to chew the fat and muse poetic about the issues of the day. Miyamoto, Koizumi and Motokura talked to the media to deliver a finely tuned message, which is that anyone who has ever loved a Mario game is likely to be pleased by what Super Mario 3D World has to offer. On this evidence, their pitch looks entirely plausible.

"The charm of a 3D Mario world comes from the ability to live freely and do all the fun actions," said Miyamoto. "Some people find those games too hard, they have difficulty with the orientation of themselves. And on the other side, while [2D] sideways strollers are fun, some of people have had enough of that which is why we are offering something that combines the best of the two."

Super Mario 3D World is a Mario platform game. For all its pipes and badges and cat-suits, it has a lot to live up to. Nevertheless, this is a game that is likely to set a new standard for 3D, multiplayer, social platforming.

We reporters visiting Nintendo earlier this week were not permitted to ask anything not directly pertinent to the game itself, but the question of whether this Mario has enough charm and originality to carry an entire hardware platform, as many Mario games have done in the past, is a something that Nintendo must face squarely in the year ahead.